It is unlikely that Yael (Yuli) Tamir – former Israeli cabinet minister and founding member of Peace Now, former student of Sir Isaiah Berlin, Oxford academic – read Gareth Morley’s major essay in the last issue of Inroads, in which he argued for the separation of nation and state.1 Nevertheless, Tamir’s book Why Nationalism can be read as an answer to Morley, for she argues precisely the opposite: that the state needs the nation, and the two should be brought closer together.

In large part, Tamir’s book is a critique of globalism, to which she sees nationalism as an antidote. In this respect, her thinking parallels that of John Judis in his recent book The Nationalist Revival.2 Where people place themselves on the “global-national continuum,” she writes, is largely determined by their interests: 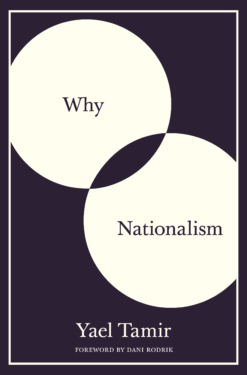 It is easier to be a globalist if you are likely to enjoy the benefits of the open market, or to support free immigration if you feel secure in your social status and do not fear that newcomers are going to take your job, or reduce the value of your property by renting the next-door apartment, forcing your neighborhood schools to face new challenges.

Globalism, she writes, “failed to replace nationalism because it couldn’t offer a political agenda that meets the most basic needs of modern individuals.” These include “the need to belong, the desire to be part of a creative community, to feel special, find a place in the chain of being, and to enjoy a sense (or the illusion) of stability and cross-generational continuity.” Citing Freud, she suggests that globalism entails living beyond our psychological means.

In other words, membership in a nation confers benefits in and of itself. But its benefits acquire an additional dimension when it is brought into alliance with the state: “With the help of nationalism, states turn into homelands – places one is affiliated with due to love and fate rather than due to instrumental considerations.” This “pre-political partnership,” this “political we,” is essential if states are to “turn into democratic and decent entities.”

A shared sense of national belonging, Tamir suggests, underlay the “cross-class coalition” that supported the development of the modern welfare state:

Society’s disinherited members were thus given permission to claim social benefits as well as protection from tangible risks. This was one of nationalism’s greatest gifts, allowing the less privileged to profit and to enjoy a set of social goods and social services grounded in rights rather than in generosity or benevolence.

So what went wrong? Her diagnosis, again, largely parallels Judis’s. Globalization along with an ideological opposition to regulation eroded the resources of the state. Western elites pursued a global destiny rather than a national one. Public education, once the “jewel in the national crown” (Tamir should know – she was minister of education in Ehud Olmert’s pre-Netanyahu Israeli government), lost its ability to promote integration and social mobility. The cross-class coalition buckled under these strains.

Tamir reproduces former World Bank economist Branko Milanović’s “elephant curve,” a graph of real income growth between 1988 and 2008 as a function of percentile of global income distribution. The graph begins at the bottom of both scales – the world’s poorest have been excluded from income growth – before rising rapidly, peaking at about the 55th percentile. This reflects rising incomes in China and other emerging economies. The graph then takes a sharp dip, bottoming out around the 80th percentile. Stagnating incomes of the poor and middle class in high-income countries are found here. Then comes another rapid rise – the trunk of the “elephant” – representing the enrichment of the world’s elites. “Growing social gaps,” writes Tamir, “lead to the formation of separate, hostile identities.” 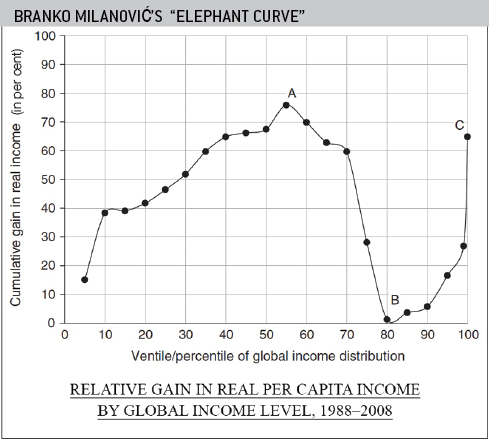 Eroded and diminished though it has been, the nation-state is still, for Tamir, “the only viable option.” Hence, she welcomes the revival of nationalism and seeks to channel it toward constructive ends, to rebuild social solidarity through “committed nationalism.” She emphasizes that the elites need to be enlisted in this task: “Asking the haves to look beyond their immediate interests must be justified not only in universal utilitarian terms but also as the national (American, Israeli, French) thing to do.”

The foregoing is, in brief summary, Tamir’s program. However, there are complicating factors, many of which she fully acknowledges. First of all, she recognizes that the nation is an artificial construct; rather than being a “pre-political partnership” underlying the state, it is an entity that needs to be deliberately encouraged by the state. She quotes the mid-nineteenth-century Piedmontese leader Massimo d’Azeglio, who helped bring about a unified Italy: “We have made Italy. Now we have to make Italians.” The Italian state makes Italians. The American state makes Americans. The Israeli state makes Israelis (another portfolio Tamir held was Immigrant Absorption).

A second complicating factor takes the form of what Tamir calls “a cultural version of the Heisenberg uncertainty principle”: “One cannot create communities that are both meaningful and entirely open: the more meaningful a community is to its members the more exclusive it would be to all others.” This suggests limits on the “diversity” and “inclusion” that are currently in vogue.

She is sceptical of statements like the one by Chancellor Angela Merkel that “we are all Germany,” including Muslims, or this one by President Emmanuel Macron: “I see Armenians, Italians, Algerians, Moroccans, Tunisians. I see so many people from Mali, from Senegal, from the Ivory Coast. I see so many others I haven’t mentioned. But what do I see? I see the people of Marseille! What do I see? I see the people of France!” Can the historical and cultural specificity that we associate with “Germany” or “France” be so easily set aside? If it is, what is the basis for the national solidarity that Tamir regards as the essential underpinning of a humane state? If it is not, should cultural uniformity be imposed on the new Germans and French people that Merkel and Macron are eager to embrace? Or is something other than historic “Germanness” or “Frenchness” to be the basis of national soldiarity?

As a disciple of Isaiah Berlin, Tamir is wary of carrying any idea to its extreme. Hence, she places limits on how any nationalist program should be carried out. One of these is that “the demand to put one’s country first should not be grounded in a sense of superiority but in a belief that others have the same right (and duty) to pursue their goals.” Nationalism, on this view, does not mean “exceptionalism.” Citizens should be committed to their nation not because it is uniquely virtuous, but simply because it is theirs.

A second limit is that “as no country is culturally, ethnically, or religiously homogeneous, the place of minorities must be secured. The fact that they do not share the ruling national ethos, culture, or language should not be used against them.”3 So in the end, Tamir cannot escape the circumstance that led Gareth Morley to develop his proposal for the separation of nation and state: “Modern states are as bound to be ethnically pluralistic as they are to be religiously pluralistic.”4

And while they espouse different solutions, perhaps they are not so far apart after all. For Morley, the best approach is to recognize the complex or “intersectional” nature of everyone’s identity while appealing to the resources of the liberal tradition to foster communication and common governance across the multiple identity divisions. For Tamir, it’s to promote national solidarity, but tempered as noted above: “to stop the ideological pendulum half way, offering a social contract that balances human rights and freedoms with social solidarity and group identity.” This sounds to me less like a diametric opposition than a creative tension.

1 Gareth Morley, Is it Time to Separate Nation and State? Inroads, Summer/Fall 2019

3 It is worth noting that while she was Israel’s education minister, Tamir created a firestorm of controversy when she approved a history textbook for the country’s Arab schools that referred to the events of 1948 as the nakba (“catastrophe”), reflecting the Palestinian perspective on what for Jewish Israelis is the heroic War of Independence.

4 Morley, Is it Time to Separate Nation and State?