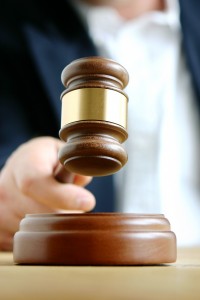 Canadian courts’ role in public policy has never been greater. In the last year, in constitutional cases alone, the Supreme Court has ruled on Employment Insurance benefits for parental and maternity leave, deportation of immigrants convicted of serious criminal offences, the ability of juries to use silence as evidence of guilt, provincial tobacco litigation statutes, remuneration for provincial court judges, Aboriginal logging rights and the right to participate in provincial resource decisions, pension rights for common-law spouses, media access to search warrants, roadside screening tests, the French-language education provisions of the Charter of Rights and Freedoms, whether government should fund certain treatments for autism, the legality of private health insurance, and the colour of margarine.

In the same year, a same-sex marriage bill, action on which was supposedly required by the courts, and a bill on judicial compensation, which was in fact required by the courts, occupied the legislative agenda of Prime Minister Paul Martin’s minority government. And arguably the most important decisions of Martin’s first elected term will not be legislation, tax cuts or social programs, but his appointment of Justices Louise Charron and Rosalie Abella, and his likely appointment of a replacement for Justice John Major, who steps down in December 2005.

This rise in the power of the judiciary is a byproduct of decisions made a generation ago. In April 1982, Canada’s fundamental legal framework jumped the Atlantic. Canada’s first ministers, with the notable exception of Quebec’s René Lévesque, had agreed to a constitutional package that included a Charter of Rights and Freedoms. The British tradition of parliamentary sovereignty, constrained by political and conventional understandings, was abandoned for a list of enumerated rights embedded in an American-style written constitution.

In the United States, the Constitution was 14 years old before the Supreme Court, under Chief Justice John Marshall, relied on it to overrule the elected government and Congress. Marbury1 was an ingeniously worded decision, but one thoroughly mired in the politics of the day. What Marbury established in 1803 was that the Court, and not Congress or the administration, would decide whether legislation and the manner in which it was implemented was consistent with its understanding of the Constitution and therefore legitimate.2

Many of the major developments of subsequent American history involved institutional struggles between the courts and elected politicians. In Dred Scott,3 Chief Justice Roger Taney wrote that “being a Negro of African descent,” Scott could not be a citizen and that Congress could not prohibit slavery in U.S. territories. The decision helped fan the flames that that brought on the Civil War, and the eventual defeat of the South made the Fourteenth Amendment possible, allowing the federal judiciary to strike down state laws that violated the equal protection and due process clauses of the Bill of Rights.

The Fourteenth Amendment did not prevent the rise of Jim Crow.4 However, federal restraint on state action did grow, notably through Lochner5 and subsequent Court decisions. These decisions brought on a Progressive attack on the principle of judicial review, which culminated in Franklin D. Roosevelt’s 1937 attempt to stack the Court to protect New Deal legislation.6 A generation later, a liberal Court used judicial review for other purposes, barring school segregation,7 extending voting rights,8 revolutionizing criminal procedure and pushing the boundaries of free speech in ways not contemplated elsewhere before or since. The liberal high water mark was reached with the Furman and Roe cases in the early 1970s,9 which struck down all state death penalty and abortion statutes respectively.

But just as the Lochner line of cases generated a Progressive reaction, the Furman and Roe decisions in particular spurred a conservative countermovement. Still, three decades of mostly Republican presidents, while helping to remake the federal judiciary, have not yet brought conservative legal triumph. Furman was quickly abandoned,10 although the issue of when application of the death penalty is cruel and unusual continues to haunt the Court.11 On the other hand, an all-Republican-appointed Court narrowly reaffirmed Roe in 1992.12

In Canada, the Charter was proclaimed against the background of this long and contentious American debate. Initially at least, the Supreme Court of Canada was unfazed. In 1985, three years after the proclamation of the Charter, the Court articulated an untroubled conception of its own role. In B.C. Motor Vehicle Act Reference13 the question was whether it was legitimate for provincial legislation to include language that defined guilt for driving without a valid driver’s licence, whether or not the accused was aware of an administrative suspension. The provinces had argued the Court was in no position to decide:

The judiciary is neither representative of, nor responsive to the electorate on whose behalf, and under whose authority policies are selected and given effect in the laws of the land.14

The Supreme Court rejected this note of caution, claiming that the issue of legitimacy had been settled with the political choice to entrench a Charter in the first place:

The historic decision to entrench the Charter in our Constitution was taken not by the courts but by the elected representatives of the people of Canada. It was those representatives who extended the scope of constitutional adjudication and entrusted the courts with this new and onerous responsibility. Adjudication under the Charter must be approached free of any lingering doubts as to its legitimacy.15

In the years since, numerous and controversial Court decisions have failed to seriously dent the Charter’s popularity. It has arguably attained an iconic status few other Canadian symbols can claim. Even in Quebec, the still-festering sore of the unresolved manner of the Charter’s enactment is not reflected in distaste for the document itself. But “lingering doubts” remain, and neither judges nor politicians are able completely to ignore them.

On the judicial side, these doubts can be seen even in Chaoulli,16 the recent case in which the Supreme Court entered forcefully into the health care debate. While the majority on the Court ruled that Quebec, and possibly other provinces, must either cut wait times or allow individuals to buy health insurance privately, three justices dissented, arguing that in doing so the Court had exceeded its institutional competence. In their view, the Court had raced headlong across the line between law and provincial policymaking.

Elected politicians are similarly unable to dispense with lingering doubts about where the border between law and politics should lie. The federal parties differ on the acceptability of using the notwithstanding clause to overrule judicial decisions on controversial social questions. Arguably, the Conservative Party suffered because of candidate Randy White’s frank “The heck with the courts, eh?” statement in the 2004 election. But as American experience shows, there can be political advantage in running against the courts. Explicitly antimajoritarian institutions can be difficult to justify in the face of a populist onslaught, and voters are not always tolerant of the “rights talk” that seeks to expand, through the courts, the degree to which minorities might exact freedoms for themselves that legislative majorities would not otherwise recognize.

And Canadians have a majoritarian “out” if they become dissatisfied with judicial review. Our Constitution includes the notwithstanding clause, section 33, that permits governments to impose whatever law they see fit, even though it might offend the Charter’s other civil liberties sections, provided the legislation explicitly invokes the clause and is renewed every five years.

Although invoking the notwithstanding clause is politically treacherous in English Canada today, and therefore rarely done, the clause nevertheless gives politicians the highest trump card. While judicial review of legislation, specifically the power ultimately to declare a law invalid on civil rights grounds, is within the purview of the Supreme Court, a wilful legislature may simply sidestep it. The 1982 Constitution handed great power to Canada’s courts, but we did not go as far as the United States, where there is no final check on the Court other than its institutional need not to let its reach exceed its grasp.

Meanwhile, politics and the law necessarily interact, sometimes violently, in the judicial appointment process, where politicians get to choose who may overrule them. The process is fraught. Prime Minister Paul Martin, when he sought his party’s leadership, campaigned as a repairer of the “democratic deficit” who would permit decisions on Supreme Court appointments to be more popularly based than the prime ministerial announcements of the past. Still, the perceived need of the Prime Minister’s Office to jealously guard executive power won out: all that Martin conceded, in the end, was that the House of Commons Justice Committee might briefly question the justice minister about the prime minister’s appointments. With the new vacancy created by Justice Major’s pending retirement, and given a minority government, will Paul Martin continue to succeed in appointing justices without parliamentary scrutiny or provincial input? If not – if the appointment process is opened up to genuine legislative scrutiny – will a Gorbachev-like reform of process turn into a Gorbachev-like surrender of control of executive authority?

Whatever the answer, Canada has so far avoided the partisan spectacles that many pundits see as besmirching the dignity of the U.S. appointment process, which requires committee advice and Senate consent. As we write, the nomination of a new Chief Justice (John Roberts) has been secured, but President George W. Bush’s nomination of Harriet Miers to replace Justice Sandra Day O’Connor has been withdrawn. The longstanding divisions among judicial conservatives came to the fore, with social conservatives such as former District of Columbia Circuit Court of Appeals Judge Robert Bork, who argues for an “originalist” approach to interpretation and deference to legislative majorities,17 seeing Miers’s nomination as a disaster. Conservative or libertarian natural rights theorists, who are polar opposites of originalists and would like to see the courts become more active in defending property rights, freedom of contract and state autonomy,18 also opposed Miers; presumably her replacement will have to do a better job of pleasing both sides.

The Miers nomination’s failure should give pause for a breath for Canadian and American critics of the partisan process in the United States. In Justice Roberts, the process has produced a controversial but well qualified Chief Justice whose views are understood and approved by a broad swath of the American community. It is not at all clear that such a claim could be made on behalf of Miers. The implication – correct or not – is that of the two, Roberts will be better placed to maintain the dignity of the institution of the Court, which is essential if the Court’s views are to have their full force among the other branches of government and among the public; after all, like the pope, the Court has no armies. The corollary of the failure, of little comfort to left or right, is that the harsh partisan light on the process will have produced a better Court.

This is a politically and socially divisive field, and one in which the action is currently fast-paced in North America. In light of all this, Inroads is delighted to have gleaned thoughts from Allan Blakeney, former Premier of Saskatchewan and an architect of the constitutional compromise that led to the proclamation of the Charter, and from Patrick Monahan, Dean of Osgoode Hall Law School and one of Canada’s leading constitutional experts. In conversations with us during the summer, each reflected on Canada’s quarter century of experience with judicially enforced constitutional rights.

Click to read Judges: Canada’s New Aristocracy, An Interview with Allan Blakeney by Gareth Morley and The Courts Are Doing Their Job, a discussion with Patrick Monahan by Finn Poschmann 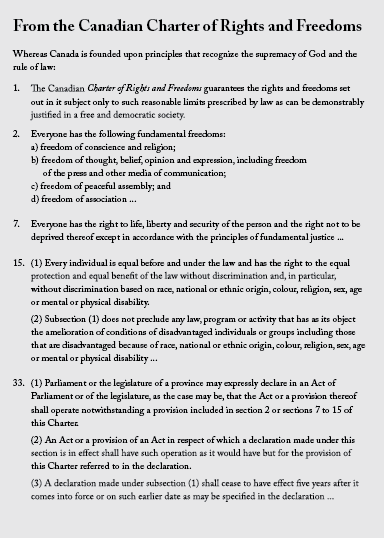 17 Robert Bork, The Tempting of America: The Political Seduction of the Law (New York: The Free Press, 1990), Antonin Scalia, A Matter of Interpretation: Federal Courts and the Law (Princeton, NJ: Princeton University Press, 1998).