Italian politics does not cease to astonish. On March 4, 2018, Italian voters elected a new parliament, five years after the previous election had resulted in a major anti-establishment uprising. This year the electorate not only confirmed the success of the populist Five Star Movement (FSM), but it also rewarded the new nationalist strategy of the League (formerly Northern League) by making it the leading party of the right. But if these results were surprising even for Italy, they should be seen as the aftershock of the 2013 election. If anything, the 2018 election clarified the patterns of change and might therefore help us better understand the realignment that is taking place in most Western democracies.

In the beginning was the crisis, and the crisis was not just due to the global recession but traced back to Italy’s long-term decline in productivity and investment. During the double-dip recession from 2008 to 2013, Italy’s GDP shrank 9 per cent, and only half of this decrease was recouped in the following five years. During this slow and weak recovery – to which the expansionary monetary policy of the European Central Bank led by Mario Draghi certainly contributed – the small rise in average income of Italian families was offset by an increase in income inequality and in the proportion of people at risk of poverty. The economic situation was especially critical in the south, where unemployment remained at around 20 per cent. It is not surprising that in 2018 unemployment remained the key concern of Italian citizens (see figure 1). 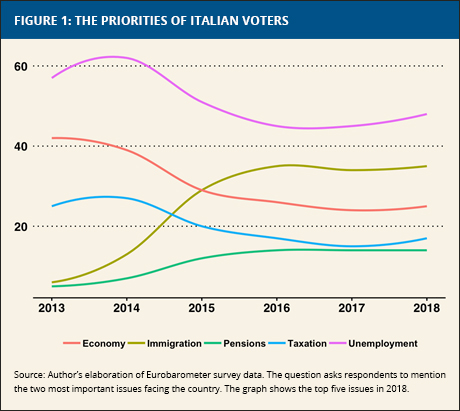 The 2018 election produced the wholesale alternation that has marked Italian politics since the 1990s. After three successive centre-left governments, Italian voters severely punished centrist and left-wing parties. Governing can be costly, especially in times of economic stagnation, and the governments led by the Democratic Party suffered a steep decline in popularity. This was especially true for Prime Minister Matteo Renzi, whose economic and political reforms gave false hope to international observers even as they alienated Italian voters. The labour market reform passed in 2014 despite large-scale mobilization by the unions marked the start of his decline, and the convincing defeat of his constitutional reform proposals in the 2016 referendum marked its (almost definitive) end.

The Five Star Movement rode the wave of popular discontent against the Democratic Party–led governments. The FSM, which prefers to be called a “movement” rather than a party, went through a process of institutionalization after entering Parliament in 2013. When founding leader Beppe Grillo stepped aside in 2017, the movement elected 31-year-old Luigi Di Maio. Without any political (or professional) experience, Di Maio had served as vice-president of the Chamber of Deputies during the previous legislature, where he built a reputation as leader of the moderate wing of the FSM. To be sure, no factions exist in a party where internal democracy is reduced to occasional digital ratification of decisions taken by a small circle under the control of the Casaleggio Associati. The political role of this private company, which manages the party digital platform (and which passed into the hands of Davide Casaleggio after the death of his father in 2016), marks an unprecedented step in the history of party organization.

Meanwhile, right-wing parties had to deal with the fallout from the unsettling Berlusconi regime (1994–95, 2001–06 and 2008–11). Idiosyncratic leadership, organizational uncertainty of party structures, chronic factionalism and reports of corruption and legal problems destabilized the right-wing camp. This helps explain why the League – unlike populist, radical-right parties in northern Europe – did not initially capitalize on the economic crisis. Only after the 2013 election and under the new leadership of Matteo Salvini, when the transformation from a regional party to a national radical-right party was completed, was the League able to gain wide electoral support by exploiting the anxieties of Italian voters.

The anxieties were economic but also cultural. In the same period, Italy faced a major challenge as one of the main debarkation points for migrants. Each year from 2014 to 2017, more than 100,000 migrants reached Sicilian shores. The phenomenon regularly hit the headlines, putting wind in the sails of the radical right. A deal struck with Libyan tribes by the left-wing Interior Minister, Marco Minniti, to prevent refugees’ departures reduced the number of arrivals by 80 per cent, but the drop in the number of asylum seekers did not change the terms of the political debate. As media narratives matter more than reality, Italian concerns about immigration remained as high as ever. 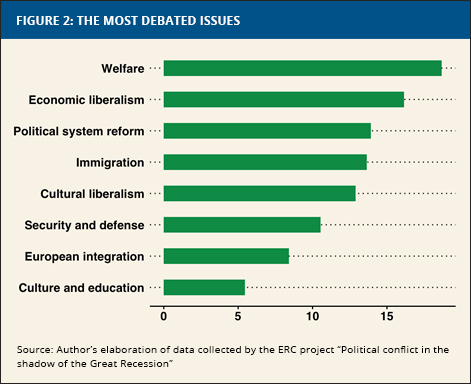 Thus, the 2018 election campaign was dominated by the long shadow of the economic crisis, but also by the immigration issue. Figure 2 shows the prevalence of the issues debated by the political parties during the two months before the election. Economic issues, such as redistributive policies, welfare provisions, market reforms and budget constraints, featured among the most debated by all parties. Issues of democratic renewal and reforms of the political system were also debated, driven mainly by the Five Star Movement. The League, for its part, fanned the flames of the migration crisis. Salvini’s strategy of polarizing the debate was successful: European integration, immigration and security became the most contentious issues of the campaign (figure 3). 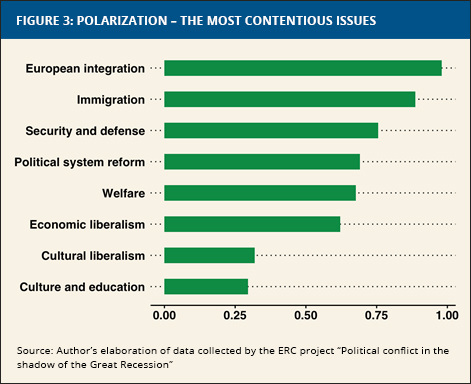 Approved just a few months before the election, the new electoral system (a mix of first-past-the-post in single-member districts for the allocation of one third of the seats and proportional representation in multimember districts for the remaining two thirds) assured no outright winner in a tripolar party system. The overall result, however, was a tale of many tales, as suggested by the geographical pattern of vote distribution (see table 1).

In the north, where the centre-right coalition obtained almost 45 per cent of the vote, the shift from Berlusconi’s Forza Italia to the League was massive. But the main news came from elsewhere – and testified to the success of the former regional party’s new national strategy. The League gained record shares of votes in central Italy and, with its racist rhetoric now directed at African migrants, even attracted some voters in the south. Still, the FSM won support from nearly half of southern voters. The proposal of extended unemployment benefits resonated widely in a region where only one in two young people has a job. The performance of the Democratic Party was particularly poor in the south, but the demise of the centre-left’s traditional strongholds in the central region is probably more revealing of the party’s long-term decline. 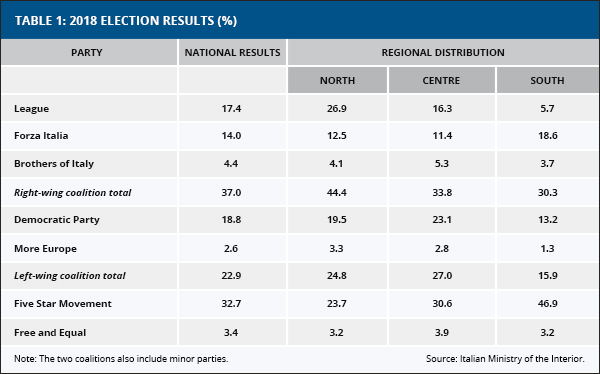 The day after the election, in the absence of a clear parliamentary majority, both the FSM and League claimed victory, the former as the party that won the most seats and the latter as front-runner of the winning alliance. The Democratic Party, still in shock after the worst result in its history, refused to consider participating in any coalition. After weeks of tactical delays, the once unlikely coalition of the two populist parties became inevitable, and Salvini and Di Maio signed an agreement around a program containing most of the election promises of each. President Sergio Mattarella vetoed the appointment of a Eurosceptic economist as Finance Minister, but once that small bump in the road was overcome, Salvini and Di Maio became the kingmakers of the new government. They agreed to appoint as Prime Minister an unknown law professor, Giuseppe Conte, while they would serve as Deputy PMs.

Was an FSM-League coalition really that unlikely? Their differences on economic issues seemed to speak against the possibility of an agreement; it is hard to reconcile the proposal of a flat tax with an extensive unemployment benefit scheme. Traditional party strategies were another obstacle. The Five Star Movement’s refusal to share government power seemed to be set in stone, as was the League’s prominence in the centre-right alliance. Nonetheless, other factors contributed to the outcome. Chief among these was the two parties’ shared opposition to the policies of the European Union (see figure 3). Further, the differences in priorities allowed for a degree of policy complementarity; while the League focuses on immigration and security, the FSM prioritizes economic issues.

Indeed, in the first months of the new populist coalition government, the two Deputy Prime Ministers acted as policy entrepreneurs in their respective areas of influence. The politicization of the migration issue has so far benefited the League, so much so that in October it ranked first with more than 30 per cent in the polls. Interestingly, Salvini’s increasing approval also affected FSM’s voters, who have grown increasingly opposed to immigration. By the end of the year, however, the cohabitation of the two parties will have to pass the crucible of the budgetary process, given their irreconcilable fiscal policies. If the government were to forcefully engage in a symbolic fight with a common enemy – the European Commission – over the deficit spending cap it could perhaps preserve the coalition. But in deciding what approach to take, the government will be under a sword of Damocles from investors refusing to further finance the massive public debt.

Italy is the laboratory of a political experiment. Its origins do not differ greatly from those that observers have identified in describing wider contemporary political changes. The Italian case, however, consists of a distinctive combination of elements missing in the rest of western Europe: long-term economic decline, a brittle social structure and uncertain institutional rules combined with a volatility of party organizations whose declining memberships have made them exceptionally vulnerable in critical moments such as those Italy has experienced.

But what we see happening in Italy might be contagious. The outcome of the Italian political experiment will test not only the durability of the new electoral alignments in Italy but also, potentially, the very stability of European institutions.

Giorgio Malet is a doctoral researcher at the European University Institute in Florence, where he participates in the European Research Council research project “Political conflict in Europe in the shadow of the great recession”... Read More