Among high-income OECD countries, Canada currently has one of the highest proportions of foreign-born individuals in its population. While Canadian immigration rates have risen substantially over the last three decades, Canada has long been a “country of immigrants.” Figure 1 shows the foreign-born share in Canada since Confederation. After hitting a low point of 13 per cent in 1901, the foreign-born share shot up to over 20 per cent through the next three decades. It then dropped and stabilized at 16 per cent until late in the 20th century, when it began to rise. In the 2010s, it once again surpassed 20 per cent. 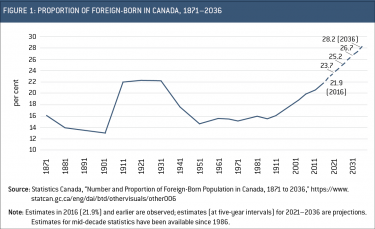 Perhaps the most important distinction between the two periods of high immigration is geographic dispersion. In the early 20th century, immigration rates were highest in the western provinces, largely as a result of rural settlement in the Prairies, while rates were also high in British Columbia, Ontario and Quebec. In sharp contrast, over the last three decades, immigration has been concentrated in a handful of large cities. Over a third of 2019 immigrants settled in Toronto (35 per cent). Another third settled in four cities with population over a million – Vancouver (12 per cent), Montreal (10 per cent), Calgary (6 per cent), and Edmonton (5 per cent). The final third settled elsewhere.

In this issue, we are publishing two articles on immigration. Mark Stobbe writes on the excessive resort to international visa students as a “back door” immigration route. Increasingly, colleges and universities are relying on visa students paying high fees (at least four times those charged to domestic students). From his experience as an instructor, he finds that most visa students are not much interested in his lectures, while university and college administrators are primarily interested in the fee revenue.

Anne-Michèle Meggs dissects the complex channels whereby immigrants achieve “permanent residence” and citizenship. Over a third of the 340,000 immigrants accepted in 2019 did not come from abroad but were already in Canada, most under student or conditional work permits. She discusses the declining role of the “points system” in determining immigration, and expands on Stobbe’s concern over the unintended consequences for postsecondary institutions of the growing number of international students. In a second article on immigration in the Summer/Fall 2021 issue of Inroads, Meggs will examine temporary worker programs.

Click to read by How Immigration Really Works in Canada by Anne Michèle Meggs.