John Myles’s review of Alex Himelfarb and Jordan Himelfarb, eds., Tax is Not a Four-Letter Word: A Different Take on Taxes in Canada (Waterloo, ON: Wilfrid Laurier University Press, 2013) appeared in Inroads 35 (Summer/Fall 2014).

In 2014 I wrote a celebratory review of the Alex and Jordan Himelfarb’s edited volume Tax is Not a Four-Letter Word where they and their authors explain why we need more, not less, taxation. Their main target was the highly successful attack on taxation launched in the 1980s and enthusiastically embraced by the Harper regime in power at the time of publication.

Things have changed since then, sort of. The left has reembraced the theme of taxing the rich. They probably always thought taxing the rich was a good idea but were often intimidated by mainstream critiques captured in Prime Minister Harper’s conclusion that there is no such thing as a “good tax.” As a result, the conventional “Robin Hood” agenda was often soft-pedalled. No longer. The outrageous income gains of the top 1 per cent have made the “rich” easy targets once again. Mainstream economists and the OECD have drastically revised their conclusions about the economic Armageddon that would follow higher marginal tax rates for the superrich. 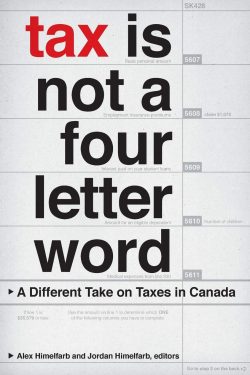 But we are still a long way from the post–World War II view that high taxes for the many are a good idea. Justin Trudeau’s tax cuts for the “middle class” are still widely praised, and no political party is threatening to restore the 2 per cent cut in the GST/HST implemented by Harper. In the short term, historically low interest rates have made debt financing rather than higher taxes an attractive proposition. At 33 per cent of GDP, Canada is a low-tax country by international standards, ranking 21st out of 37 OECD countries in 2018. And low taxes mean low social spending. Since the middle of the last decade, Canadian social spending as a percentage of GDP has actually fallen behind that of the United States.

The upshot is that in both the intermediate and the long term, “progressive” Canadians eager to implement daycare and pharmacare, ensure adequate housing and deal with climate change, among many other good things, will have to embrace “higher taxes for almost everyone” – a bumper sticker to guarantee that you lose the next election. Why so?

The comparative evidence is conclusive. Higher levels of taxation are a necessary, if not sufficient, condition for reducing both inequality and poverty. And getting high levels of taxation probably means we must abandon our fears of so-called “regressive” payroll and sales taxes. Hugh Mackenzie made this point in the Himelfarb volume, where he criticized the left for focusing on the distinction between “progressive” (good) taxes and “regressive” (bad) taxes and failing to look at what those taxes can buy. As he pointed out, regressive taxes (e.g. consumption taxes) can be used for progressive purposes (public health care, education, public transport). I followed up on Mackenzie’s point and have learned a few lessons:

There are two reasons we get it wrong.

First, we don’t have good measures of net redistribution – the distribution of taxes minus benefits. Payroll and sales taxes are regressive on the revenue side. But what we want to know is what happens on the expenditure side, and for the most part we simply don’t know how to do that.

John Myles is Canada Research Chair and Professor in the Department of Sociology and in the School of Public Policy and Governance at the University of Toronto. Read More