The Liberals’ problems with SNC-Lavalin have led to a considerable drop in their polling numbers. While supporters seem to be scattering in all directions and not just moving to the Conservatives, a Conservative return to power in 2019 is, for the first time since the 2015 election, a realistic possibility. Will that happen? As I often say to my students, if I could foretell the future, I wouldn’t be just another retired professor. But it does seem worth thinking about what a Conservative government could do if it is elected. I want to focus here on Indigenous policy and politics, an area where the Liberals made great gains in 2015 but have now lost much of their advantage as a result of Mr. Trudeau’s feud with Jody Wilson-Raybould and his thoughtless taunting of Grassy Narrows protestors.

Even if they win the next election, the Conservatives’ room to manoeuvre may well be limited. At present levels of party support, a victory would probably result in a minority government, meaning that passing legislation in the House of Commons would require the support of at least one other party. Also, Justin Trudeau’s appointments to the Senate have created a progressive, though not necessarily Liberal, voting majority in that body, and the reformed Senate has shown several times that it will not simply rubber-stamp bills coming from the Commons. Forget about visionary legislation like replacing the Indian Act, which the Liberals tried to accomplish but could not in spite of a much stronger position in Parliament. A Conservative government will have to rely on policy tools such as appointments, orders-in-council, control of the administration, strategic litigation and budgeting, while pursuing more modest goals.

But modest does not mean unimportant. Current events will give a Conservative government a chance to reorient policy toward greater independence and prosperity for First Nations. The beginning, but not the end, of the reorientation should be the Trans Mountain pipeline. 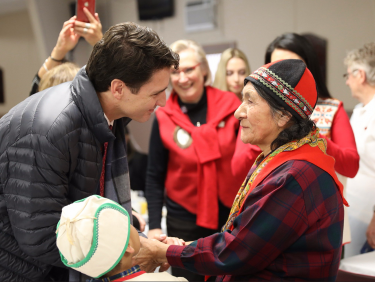 After Trans Mountain became trapped in a quagmire of opposition from a number of quarters – the government of British Columbia, environmentalists opposed in principle to the use of oil, coastal First Nations with other opportunities for economic development – the federal government bought the existing pipeline as well as the expansion proposal from Kinder-Morgan. It is now redoing one phase of the consultation process according to directives from the Federal Court of Canada in the Tsleil-Waututh decision. But if the new consultation leads to a recommendation to proceed with Trans Mountain, the result is likely to be challenged in court again by the same coastal First Nations who litigated the first time. Hence a Conservative government will inherit this mess – wherein lies opportunity.

On the political front, the Conservatives should go forward with the current government’s proposal to sell Trans Mountain to a consortium with majority Indigenous participation. This will highlight the reality that most First Nations want to take part in natural resource development. Forty-three First Nations accepted the Mutual Benefit Agreements offered by Trans Mountain, as against 12 that were opposed. And behind these 43 supportive First Nations located along the Trans Mountain route lie the approximately 200 members of the Indian Resource Council, who produce oil and gas, transport these products in pipelines and sell services to other players in the industry. The Trans Mountain pipeline furnishes a unique opportunity to demonstrate that most First Nations are not opposed to resource development; indeed, those not favoured with an urban location see it as their best opportunity to achieve prosperity and independence.

But to sell the pipeline, the Conservatives will also have to proceed on the legal front, for no consortium, Indigenous or otherwise, will buy it until construction is assured. The jurisprudence surrounding the “duty to consult” was mainly developed around individual development projects – mines, oil wells, forestry clearcuts and ski resorts – that affected the traditional territory of only one First Nation. In these cases, the courts often ruled that consultation had been inadequate, but also insisted that the right to be consulted was not a veto. Once consultation had been carried out adequately, said the courts, development could proceed, even if the First Nation remained opposed to the project.

However, things get more complicated with long, linear projects such as pipelines, which affect dozens of First Nations. So far the courts have ruled that consultation was inadequate in the Northern Gateway and Trans Mountain cases, but have not yet had to face the more difficult question of what to do when consultation has been ruled adequate but the dozens of First Nations affected by the project remain divided. Advocates for the coastal First Nations opposed to Trans Mountain are in effect claiming an individual First Nation veto. But if that position is allowed to prevail, corridor projects over any extensive span of territory will become virtually impossible to build in Canada.

In the wider economy, such issues are resolved by governments’ power of expropriation, with compensation being negotiated for easements or outright takings, but existing provincial legislation does not apply to the rather nebulously defined concept of Indigenous traditional territory. Federal legislation would be desirable, but a Conservative minority government will not be able to pass legislation in this area, especially without a majority in the Senate. The government will have to apply the Supreme Court’s theory of infringement of Aboriginal title and defend it in court. If it does not have the stomach for that battle, it probably cannot build the Trans Mountain pipeline, no matter how many First Nations support it and want to acquire a share of ownership.

Trans Mountain is the current issue, but the implications go far beyond that one project. The same questions could arise in relation to a revival of Northern Gateway, Calvin Helin’s Eagle Spirit proposal for an energy corridor in northern British Columbia and the additional pipelines that will be necessary to feed liquefied natural gas exports from the west coast.

It is impossible to exaggerate the importance of making progress on this file. Canada’s oil industry, previously our largest export earner, is now under virtual quarantine impeding future growth. International investors have been selling Canadian assets and running for the exits. Talk of separation is once again fashionable in Alberta. For now it is just talk, but it could become much more dangerous if nothing is done to lift the pipeline embargo. The best way to break the blockade is through a new grand alliance of energy producers and development-oriented First Nations. That alliance has been growing on the ground in western Canada through a long series of meetings and conferences, but it needs buy-in from the federal government to become effective. A Conservative government will have a historic opportunity to drive that alliance forward, and in doing so shift the policy matrix of Indigenous issues in the direction of economic development and self-sufficiency.

While moving on that front, a Conservative government should also trim back the federal apology-and-compensation agenda, which has spiralled out of control under this Liberal government. Compensation is being offered to those who were adopted out as children (the “Sixties Scoop”) as well as to the “survivors” of Indian hospitals set up to deal with endemic tuberculosis. The most expensive reparations concern schooling. First it was the residential schools apology announced by Stephen Harper, costing an estimated $5 to $6 billion for compensation payments to anyone who ever attended a residential school. Now the government has announced a similar compensation program for all who attended day schools on reserve. The price tag for reserve day schools may be even higher than for residential schools because more claimants are involved. In view of this development, a demand is sure to follow to compensate those who attended public day schools off reserve.

Think a minute about the implications. Residential schools were said to be uniquely horrible because they destroyed Indigenous languages and cultures while permitting physical and sexual abuse. But now we are moving to compensate all First Nations people who ever attended a school of any type. What is the message here? That their children should never have gone to school at all? Someone in government needs to call a halt to this policy of piecemeal reparations under the guise of reconciliation.

Ironically, our contemporary policies for the education of First Nations children will probably also be condemned by future historians as a failure, in view of the dismal statistics for achievement and graduation. Prime Minister Harper, working mainly through former Indian Affairs Minister Chuck Strahl, tried to strike a new funding deal with the Assembly of First Nations, but it fell apart when National Chief Shawn Atleo could not deliver the support of the more radical chiefs. Since then the Liberal government has delivered increased funding without the accountability measures that Mr. Harper demanded.

It is probably too late for a Conservative government to revisit fundamental legislative reform strengthening First Nation reserve schools, but it could perhaps undertake worthwhile initiatives off reserve, where more than half of Indigenous people now live. Big public systems always have difficulty accommodating small, culturally distinct minorities. Alberta’s successful experiment with charter schools might provide a model for combining public funding with Indigenous parental control and cultural distinctiveness. Publicly funded vouchers for attendance at private schools with an Indigenous flavour might be another model worth pursuing.

The extensive American experience with vouchers and charter schools for racial minorities might provide some guidance. It’s an area where conservatives and libertarians mistrustful of state-run education might find common ground with liberals and social democrats concerned about outcomes for minority populations. Of course, rent-seeking teachers’ unions will be opposed, but they will oppose a Conservative government in any case. Why not fight over something worthwhile?

Tom Flanagan is Professor Emeritus of Political Science at the University of Calgary and a former Conservative campaign manager. Read More