In 1983, Israeli novelist Amos Oz interviewed militant settler Pinchas Wallerstein. “There are 25,000 Jews, net, in Judea and Samaria today, not counting greater Jerusalem,” said Wallerstein. “Five years from now, if you go by the home construction starts, there will be fifty to one hundred thousand … That’s a number it will be impossible for any government to uproot. Just give us five more years of peace and quiet and the question of the land of Israel will be sewn up for good.”

Mr. Wallerstein got his “peace and quiet” – no Israeli withdrawal, no moratorium on settlement construction – and, two decades later, there are more than 200,000 settlers in the West Bank, the land is ripped through by miles of security fence and Israeli-only roads, checkpoints multiply, Palestinians’ living conditions go from bad to appalling, and Palestinians and Israelis kill each other by the hundreds. It’s a chaos that only Mr. Wallerstein and his fanatic friends, and Ariel Sharon, and the militants of Hamas and Jihad could enjoy. 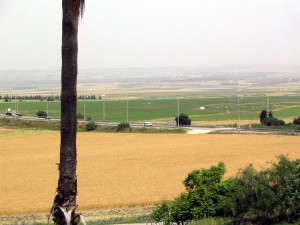 There has always been a strain of Zionism which has held that if Israelis were just tough enough, Palestinians and the Arab world would come to accept Israel’s presence. That view now seems dominant in Israel, and has been rewarded with the explicit acceptance of “limited” settlement expansion in the West Bank by the Bush administration in the United States. Outside of North America, the view is quite different. According to U.S. historian Tony Judt, “The Jewish state today is widely regarded as a – the – leading threat to world peace.” And in Canada, as we go to press, the Globe and Mail’s John Ibbitson reports that “senior government officials” are concerned that the Liberal government “is moving away from a balanced approach toward the Middle East in favour of explicit and virtually unqualified support for Israel” (Oct. 15, 2004).

Before we officially tilt toward Israel, Canadians need to think harder about the Middle East. To that end, we devote much of this issue of Inroads to the Israel-Palestine conflict. In the following pages, you will find voices from both sides of the divide, as well as aspects of the situation that don’t receive enough attention: Israeli language policy, European diplomacy in the Middle East, the influence of Christian fundamentalists on U.S. support for Israel. In addition, in the reviews section, our writers look at recent histories of the Israel-Palestine conflict and the failure of the Oslo peace process, a biography of Ariel Sharon, and books about the Islamic world and U.S. foreign policy that place the conflict in a broader context.

We invite your comments. 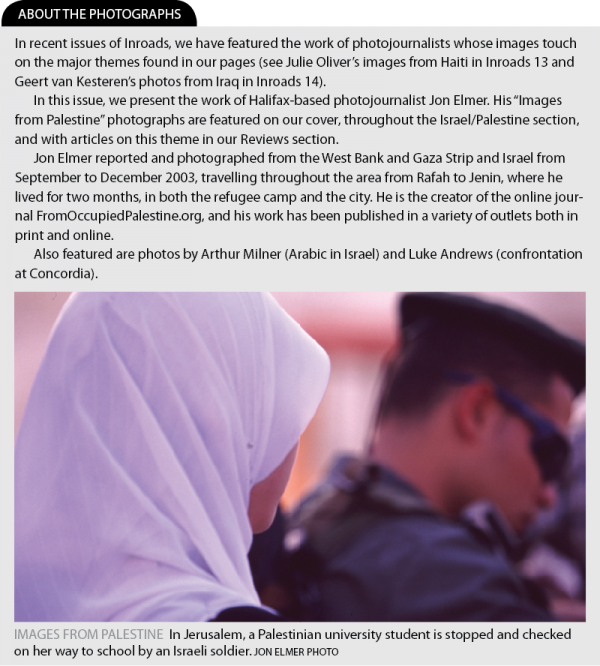