There was a great flutter early this year over A Million Little Pieces, the largely faked autobiography by James Frey. Faking an autobiography amounts to taking people into your confidence only to lie in their faces. Frey’s downfall was assured when the truth came out and one of those faces belonged to Oprah Winfrey. While we cannot require an autobiographer to get everything right, we expect him or her not to intentionally get things wrong. Two important books came out in paper last year which, in quite different ways, raise intriguing questions about the use and misuse of autobiography. I did not especially like either, but each provides important, if sometimes unintended, insights into a major American cultural figure of our era. 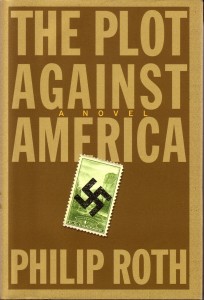 Philip Roth’s The Plot against America and Bob Dylan’s Chronicles: Volume One, though they could not be more different in conception, can both be described as non-autobiographical autobiographies. Dylan’s book has no discernible structure at all. It might be titled “snippets” rather than “chronicles,” jumping back and forth among events, reflections and characters with scant regard for making connections – even chronological ones – between them. Roth’s book, in contrast, is carefully structured, though even more unconventional as autobiography. He describes in detail his own life from the age of eight to ten in Newark, New Jersey – only not as it was but as it would have been had the regime in America been a pro-Nazi one with Charles Lindbergh instead of Franklin Roosevelt as president.

First Dylan. I was in my late teens during the early sixties, the period that Dylan tells about in his Chronicles; relatively few of the many scores of people who turn up mean anything to me. Yet Dylan seldom tells me enough to make them interesting: what matters is that they influenced him. Moreover, while he repeatedly tells us that these various passing characters changed his perceptions and often his sense of himself and his art, he never tells us how those influences found their way into the songs that were etched into a generation. Despite this, reading the book is in itself enjoyable since, as in his music, Dylan has a way with words. Here the words give us a nice feel for New York’s Village in the heady early days of the folk music scene.

Moreover, in what it says, and especially in what it does not say, Dylan’s non-autobiography is useful in helping us understand why he became a kind of tragic antihero. He still does not understand why he was regarded by so many as “the conscience of a generation.” He never claimed to be a protest singer – a term he has little regard for, he tells us. Naturally he was offended and enraged by the insistent demands of fans that he lead them to their political destiny. Had I not read this book and continued to know Dylan only by his songs, I would dismiss this claim as disingenuous, but now I am inclined to take him at his word. There is no ideology, no coherent framework of any kind in which he placed the various ideas and events that caught his fancy, whether in a book someone tells him to read or in a Woody Guthrie or Pete Seeger song. 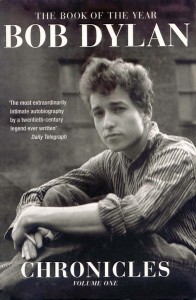 In some unexplained, indeed unexamined, way these ideas and events spoke to him and he was able to find just the right combination of words and melody to give them expression. But that is as far as it goes. There is no effort to fit them together in something consistent and coherent. So it is perfectly natural for him to end a chapter about folksingers who influenced him with a passing reference to how impressed he was by Barry Goldwater.

In an extraordinary paragraph toward the end of the book Dylan writes, “In a few years time I’d write songs like ‘It’s Alright Ma (I’m Only Bleeding)’, ‘Mr. Tambourine Man’, ‘Lonesome Death of Hattie Carroll’, ‘Who Killed Davey Moore’, ‘Only a Pawn in Their Game’, ‘A Hard Rain’s a Gonna Fall’ and some others like that.” These songs are among his greatest, and his most “political.” In this passage, he reflects on the simple fact that if he hadn’t gone to wait for his girlfriend who was working for a theatre group putting on a performance of Brecht-Weill songs and happened to hear the song “Pirate Jenny”, “it might not have dawned on me to write them, that songs like these could be written.” “Pirate Jenny” is a remarkably powerful, evocative song about class hatred, a maid looking forward to the death of the “gentlemen” she serves at the hands of the crew of the “black freighter” in the harbour. Yet if Dylan knew anything about the sociopolitical context of Brecht’s writing he never mentions it or takes it into consideration. The influence begins and ends with the evocation of a feeling through words and music.

In the end we are left with many impressions but little that is solid. If nothing else, Dylan’s subsequent fame constrained him from engaging in any gross distortions in this book, since any such distortions would no doubt have been caught by any number of critical reviewers. Still, he expresses no ethical qualms as he tells us how when first meeting certain people he reinvented his own background to project the image he sought as he developed his reputation on the New York scene.

And so, if there are no evident sins of commission, the very form of the book ensures that there will be many sins of omission. While Dylan admits to growing up in Hibbing, Minnesota – as opposed to some of the more exotic western and southern hometowns he claimed for himself in the early days – he tells us little of his family life. Indeed, one needs to read between the lines in these brief passages about life before his arrival in New York to discover that his family was Jewish. Revealing this aspect of himself would have undermined the American everyman image that he sought to convey.

Was being Jewish so much less important in Hibbing, Minnesota, after the war than it was in Newark, New Jersey? In Roth’s Newark, the efforts of family and community to conform to expectations of being good Jewish Americans are omnipresent. This is not a new theme for Roth, but he makes it absolutely central in The Plot against America by fabricating a set of circumstances which transform it from the maudlin to the exalted. By using this remarkable contrivance, being Jewish in America is turned into something potentially dramatic and noble, a setting for heroic acts in everyday life.

We certainly cannot criticize Roth for lack of ambition in tackling this enterprise. Unfortunately, however, as literature this non-autobiography is destined to fail. His portrayal of the world from a nine-year old boy’s perspective, though sometimes poignant, doesn’t always ring true since it is forced into an unconvincing political context.

Why did Roth write this idiosyncratic book in the twilight of his years? One popular interpretation is that it was political satire (a genre Roth had previously visited with Our Gang, his merciless attack on Nixon in 1971), a disguised critique of the fascist tendencies in the contemporary radical right in the United States. I do not share this interpretation: for one thing, Roth does not try very hard to make his political satire (sic) particularly effective.

No. It is the story of his family that is at the centre of this book, a story Roth clearly needed to tell. And the best parts are surely autobiographical – such as eight-year old Philip’s experiences taking the bus after school with ten-year old Earl Axman to find out where and how the Christian men who worked in Newark lived. But Roth has written about episodes from his youth in earlier books, except that the protagonists generally had different names: Portnoy, Kepesh, Zuckerman. Why, this time, is it the story of Philip Roth and his mother Bess and his father Herman?

He was, I am certain, trying to right while there was still time what he had come to perceive as a wrong to his parents – even if an unavoidable wrong for the writer he was. The political story is a device, a convenient framework to turn his parents into heroes, to turn upside down the portrait that had emerged from the fictionalized versions, the parents of the various protagonists of his 27 books. In these books, mother and father typically come across as anything but heroes. But now, in this context, everything changes. The prototypical Jewish housewife that was his mother is turned into the resourceful and brave defender of the family against the external threat; the beaten-down insurance salesman and provider that was his father is turned into the honest and fearless witness, scourge of the Lindbergh apologists in his own community.

In this sense the contrivance is brilliant. That which is stifling becomes uplifting; that which is fearful becomes courageous; that which is narrow becomes prescient. Unfortunately, for it to be believable we need to believe in the political setup. And for that to happen Roth would have had to invest so much more into the political story that it would have overshadowed the story of his family, something he obviously was not about to do. An unsatisfactory result was thus inevitable.

Had this book lived up to the promise of Roth’s recent novels, he would have been, in my view, an almost unavoidable choice – clearly superior to Harold Pinter – for the Swedish Academy’s Nobel Prize in literature when they came around to choosing an English-language writer last year. His 2000 book The Human Stain, though not his best, is still a work by a fine writer in good form. The Human Stain followed upon I Married a Communist, a powerful and at times searing portrait of the world of American left-wing intellectuals and media personalities of the 1940s. I Married a Communist followed upon American Pastoral, a masterpiece. In this book, among the finest of American novels, the narrator takes up the story a decade later. Nowhere is the generational conflict, the profound tension between the values, indeed the essence, of postwar Americans and their children’s generation better portrayed. Set against the story of the innocent 1950s New Jersey world of “Swede” Lebov and how it was shattered in the 1960s by the actions of his daughter, the contrived story of the Roth family of 1940s Newark in The Plot against America pales in comparison.

Philip Roth chose to write this doomed anti-autobiography late in his life for his own reasons, but literature was surely the loser. Roth at his best could have captured the post-9/11 rift in the United States better than anyone else. Instead of Rabbi Bengelsdorf, the rather pastily drawn Jew in the Lindberghs’ social circle and target of Herman Roth’s outrage, Roth could have created an antagonist of substance and power, a key player in neoconservative circles. But perhaps it is not too late; perhaps he will.

What about Bob Dylan? What if he had tried to write a real autobiography, to tell his own story, not as a series of selected and selective snippets but as a genuine effort at weaving these threads into something meaningful about his generation? From what we see of him in this book, it is very likely that he would have failed. It wouldn’t have sounded like the Dylan we all know, and hence it would have come out as inauthentic. Still, I would have liked to see him try.