This has been called the post-truth age. Science, reason, logic, facts have been losing their substance, fading into ideology, myth, conspiracy and paranoia.

Now, thanks to some 63 million Americans minimally literate enough to cast a ballot, we have Donald Trump. Con man, egomaniac, pathological liar, sexual predator, manifestly unfit by character for high public office. Yet here he is, alleged “leader of the free world” with his finger on the nuclear trigger. He has suddenly driven America to the brink of destroying the liberal international order painstakingly built up over the past seven decades; of reversing the hopeful efforts to deal with threats to the global environment; of returning race hatred, misogyny, bigotry and intolerance to the very centre of American values. And all the while, together with his glitzy family and grisly entourage, he schemes to make as much money as he can from his latest, greatest scam.

I would call what I have just written “facts” backed by a plenitude of evidence. Others would denounce these words as “fake news,” or “alternative facts.” Half of America agrees that Trump is a monster. The other half thinks he is a messiah – and perhaps the caudillo who will enforce their will and their values on a hostile world. Trump and his followers live in an alternative looking-glass universe from which communication comes in Orwellian Newspeak: black is white; love is hate; peace is war; Barack Obama is an alien; Vladimir Putin is a good guy. 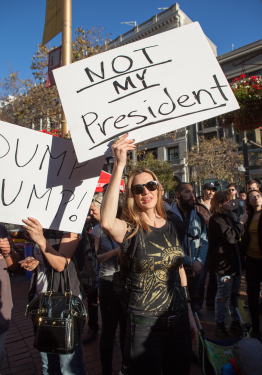 There are commentators who seek to normalize the abnormal, to legitimate the illegitimate. Trump, they assert, will be housetrained by the experience of office; his adult appointees will civilize him. Such illusions have a long history. When the conservative fool Franz von Papen brought Adolf Hitler to the German Chancellery in 1933, he assured his anxious associates that “within two months, we will have pushed Hitler so far into a corner that he’ll squeak.”

While Trump has in his first few months backtracked on some of his more egregious foreign policy stands, this represents less a civilizing process than recognition of the alarming ignorance of his earlier understanding of the world. But it in no way diminishes his narcissistic confidence in himself. He has got where he is by regularly ignoring the experts and party elders who sought to moderate him. Why would he suddenly change course now?

All his adult life he has run a private company, surrounded by yes men and trophy wives who fawningly stroke his ego and reassure him of his brilliance and invincibility. The only thing that has changed is that he has just accomplished the biggest hostile takeover in corporate history and is basking in a CEO office like no other on earth. But this is an office that attracts opposition and criticism, lots and lots of it. And Trump can neither abide nor handle criticism.

The other side of narcissism is deep insecurity. Criticism, especially if comes in the form of derision, is fuel to the flame of his vanity. Nothing drives him to greater fury than being the object of laughter. This is a volatile combination of combustibles that flares in predawn Twitter tantrums against Saturday Night Live; or in darker hints of authoritarian intolerance when he attacks the “lying” media as the “enemies of the people.”

Media critical of Trump are enemies of the people because, as Trump assured his followers in his acceptance speech at the Republican convention, “I am your voice!” In the populist narrative, he is the tribune of the masses, the articulation of their seething anger, their strong arm – and their boot.

Populism posits the people as a monolith with a unified will, needing only the right leader to voice and enforce that will. The paradox is that populist political movements are called into being by the division of the people. The people must struggle against the elites, the power bloc, the Establishment. These sinister forces claim to represent the people, but to populists they subvert the unity of the people, hence must be denied membership in the people. Trump populists refer to themselves as the only “real” Americans; the 66 million who voted for Hillary Clinton are fake Americans, like the fake news that supports their un-American views. Worse, this bears an undeniable racial charge: “real” Americans are white. Hence the Birther movement (which Trump himself led) that insisted that an African-American Democratic president could not, literally, be a “real” American but must be an alien Muslim imposter. Hence also the insistence that mass voter fraud exists and that minorities (“illegal aliens”) must have their votes suppressed.

Now that a populist tribune is in the White House, the possibility of authoritarian rule is imminent. Checks and balances have always been at the heart of the American system of government. Already some of these seem to be working to contain Trump. His flagrant Muslim-ban executive orders have been stymied by the courts. His promise to repeal and replace Obamacare initially failed in the House of Representatives when his own Republican majority splintered in two directions. But a string of such defeats might well be the trigger that sets off open authoritarianism. One scenario would see the Big Man overriding those very “elitist” mechanisms of restraint he condemned on the campaign trail, claiming draconian measures are necessary to “drain the swamp,” and rousing his followers to form intimidating street mobs in support. Perhaps another terrorist attack could be Trump’s Reichstag fire.

In this scenario, the institutional response should come from Congress, which has the power to impeach and remove a president for “treason, bribery, or other high crimes and misdemeanors.” A compelling case might be made for removing Trump (even short of future authoritarian abuse of his constitutional powers, the questions of foreign “emoluments” from his business interests abroad, or of smoking guns being found in his sinister Russian connections, could figure in articles of impeachment). However, this almost certainly will not happen given the Republican stranglehold on the House and the fierce, remorseless partisanship of that party. Only in the event that the Democrats regain control of the House in 2018 could impeachment become a possibility, but ruthless gerrymandering by the Republicans along with minority vote suppression makes the prospect of a Democratic seat majority unlikely even with a popular vote majority.

What makes the next four years truly threatening is that a legitimacy crisis has become general. Since at least the late 1990s, Republicans have regularly painted Democrats, especially liberal Democrats, as illegitimate. In 2016 populism dovetailed with partisanship to deliver the mass of regular Republican voters to Trump, despite his aggressive assault on the party mainstream during the primaries.

But Trump carries little or no legitimacy among Democrats or independents on the left. Three million more Americans voted for Clinton, a democratic mandate denied by the 18th-century relic that chooses the president, the Electoral College. The story of Russian covert interference in the election on Trump’s behalf is already a scandal that may yet grow worse. Then there is FBI Director James Comey’s ill-considered but fateful intervention in the flimsy Clinton email matter. Finally, there is Trump’s arrogant and reckless disregard for decency, leading a campaign that featured calls for his opponent to be locked up or even assassinated.

The result of all this: the widespread slogan “Not My President!” During the George W. Bush years, many hated his war in Iraq but nonetheless acknowledged that he was still their President, like it or not. No more. Blue-state America is joining red-state America in seceding from democratic trust. Not since the Civil War era has the fabric of democracy been stretched so thin.

Against this turbulent backdrop, perhaps the single most bizarre feature of the Trump ascendancy looms like a huge question mark: the open hostilities that have broken out between Trump and the intelligence agencies. Some in the White House have begun warning of the “deep state,” with dark intimations of plots to overthrow the people’s tribune. During the Cold War there was speculation that a left-wing party coming to office in the West might fall victim to a coup orchestrated by the secret state in the name of defending capitalism against Communism. Now we have fallen down a rabbit hole into a weird world in which a Republican President is being investigated by the FBI for evidence that he is a Manchurian candidate of the Russians, while Democrats howl “subversion” in tones that they once would have labelled McCarthyite.

The “deep state” might be an appropriate analysis of Turkey, Egypt, Pakistan or Thailand, but it is a doubtful concept to apply to America. Power in the American system tends to be fragmented and diffuse and this goes for the intelligence agencies as well. They could never agree to get a coup together to take out a president, however much some may despise him. What they can do, however, and are doing, is to leak damaging classified information that keeps an already chaotic White House continually wrong-footed. It has been said that the United States has become less a democracy than a “vetocracy.” In his stumbling approach to governing, Trump has contrived to add one more set of influential forces ready to veto his initiatives.

Getting rid of Trump during his term may be a pipedream, but we can at least hope that he will continue to be his own worst enemy.