I became aware of historian Timothy Snyder with the release in2010 ofsuffered most from Soviet and Nazi tyranny during the 1930s and 1940s. Snyder followed up with 2015’sBloodlands, an excellent history of the territories thatBlack Earth, an account of the Holocaust that explores the impact of different Nazi occupation governments on German behaviour. These works solidifid Snyder as a fine historian. His most recent effort, The Road to Unfreedom, marks an uncomfortable shift from historian to historian-cum-polemicist, and the transition ultimately disappoints.

Snyder’s book is divided into three big themes. The fist examines the rise of Vladimir Putin and his brand of post-Soviet politics. Snyder introduces the idea around which his book revolves: The “politics of inevitability” versus the “politics of eternity.” The politics of inevitability envisions history as running on rails toward a predestined and obviously positive end point. Post–Cold War American liberal capitalism, post-1945 European integration and the fist half of the USSR’s existence are his examples of the politics of inevitability in action. The politics of eternity is history as the almost timeless struggle of an innocent nation or polity against a series of repeating and never-ceasing forces determined to destroy it. This is a worldview that uses history not as a gauge against which one situates oneself or assesses change, but as a Möbius loop of threats and challenges to overcome. Snyder argues that Putin’s Russia embraces the politics of eternity, building on ideas of an eternally threatening West hatched under Brezhnev in the 1970s and fusing them with the writings of interwar Russian fascist Ivan Ilyin. Putin promotes the notion of an aggressive, decadent and morally corrupt West set on destroying innocent and pure Russia. 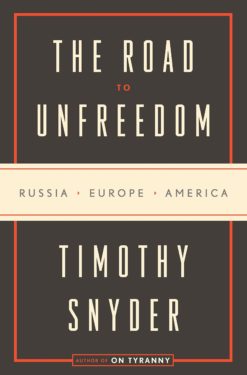 The second theme is an extremely detailed account of the Russian war against Ukraine in 2014, informed in part by theories posited earlier in the book. This is impressive. The myriad shreds of news from that period are placed into a coherent and convincing narrative, making one realize the degree to which events in 2014 Ukraine marked the start of a genuine war. It is overlong at times and feels ill-fited with the book’s broader narrative. Surprisingly, Snyder does not reprise a theme from his superb late-2014 lecture about Russia’s geopolitical goals in invading and annexing pieces of Ukraine.1 There he referred to Russian propaganda as “applied post-modernism”: Russia’s use of the West’s embrace of relativism and loss of faith in ultimate truth to bombard populations with competing and often contradictory narratives, engendering confusion and delaying political reactions to Kremlin aggression.

The book’s third theme attempts to explain the rise of Donald Trump to the American presidency, casting him as Moscow’s Manchurian Candidate and as the outcome of America’s failing politics of inevitability. Snyder explores Trump’s business dealings with Russian mobsters and oligarchs beginning in the late 1980s and implies, but never states, that Trump was somehow enticed or induced to become a perhaps unwitting agent of Russian geopolitical efforts directed at the United States. This effort veers toward the conspiratorial and feels forced, an attempt to make history meet the expectations of Snyder’s thesis. You don’t doubt the information Snyder provides, just the slapdash way it is presented and the tangential personal links.

Often, the reader is left feeling that the book is an effort by Snyder to explain his shock at Trump’s victory. Russian bots, trolls and online campaigns did spread false information during the 2016 American campaign, but Snyder suggests that, if not for these efforts, Trump would not have been President, or even the Republican nominee. He barely addresses the fact that for the Russian campaign to have gained traction, it had to build on preexisting sentiments among U.S. voters, and hardly touches on the rise of conspiracy theories across broader Western culture and how this laid the groundwork for successful foreign propaganda.

Snyder’s attempts to explain Trump’s as a bot-driven Trojan horse in the service of Russia is further muddied by other explanations he then offers. He points out that areas hit hardest by the opioid epidemic – “localities where the American dream had died,” and where Trump’s call “for a return to the past, to a time when America was great” had appeal – swung most strongly toward Trump in both the primaries and the general election. These are persuasive and fact-based assertions. Synder then casts the rise of Trump as a consequence of increasing economic and income inequality. These explanations are not invalid, but they lay waste to his broader thesis, and are jarring in the context of the Russian plot that is supposed to explain Trump’s rise.

Snyder fails to address myriad other factors that contributed to the political milieu that created a candidate like Trump, from competing brands of identity politics to the loss of midwestern manufacturing jobs as a result of automation. Any attempt to attribute Trump’s election to a single phenomenon, whatever it may be, is simplistic and is undermined by Snyder’s own more nuanced evidence.

The Road to Unfreedom is disappointing as a book and would have been better presented as a series of articles. The history of Russian thought, the evolution from the optimism of the October Revolution to the defensiveness created by the Second World War, and the inflence of fascist thinkers on Soviet and Putin-era Russian politics and society are fascinating and will be unfamiliar to many readers. As noted, the dissection of Russian behaviour around the 2014 invasion of Ukraine is superb. For those still looking for reasons to be appalled by Donald Trump, the stories here are entertaining if disjointed. Equally, Snyder offers useful observations about developments in Western democracies, democracies that risk entrenching their own brand of unfreedom.

In the context of a specific scandal within a now-defeated Polish government, Snyder observes that “public life cannot be sustained without private life,” and that “by accepting the private lives of public fiures are the same thing as politics, citizens cooperate in the destruction of the public sphere.” These observations have wider application, and can inform our take on, among other things, the rise of “cancel culture” in the West, where citizens, the media and government increasingly blur the lines of public and private life and where irony, humour and divergent behaviour are paved over by an earnest “woke totalitarianism” that punishes alleged blasphemers. This is not a society where you are being watched by Big Brother, but rather by millions of little brothers.

Near the end of the book Snyder says, “To make of American politics an eternity of racial conflct is to allow economic inequality to worsen. To address widening disparities of opportunity, to restore a possibility of social advance and thus a sense of the future, requires seeing Americans as a citizenry rather than as groups in conflct.” A valid observation, though one whose lesson needs to be heard as much by the intersectional left as by Trumpian populists. Perhaps these observations reveal there is not so much a single road to unfreedom, but myriad roads to that terrible destination.