A friend of mine once said (in relation to Rupert Brooke, the early-20th-century British poet, and his Letters from America) that poets are the only political scientists who should be allowed to practise. I think of that remark often when I’m reading the work of Philip Resnick. As attentive readers of Inroads well know, his poems express the well-honed insights of the astute political scientist, with the discipline, focus and precision that are the mark of the poet.

We learn in Itineraries, Resnick’s memoir of his “intellectual odyssey,” that when he was in Grade 10 he stomped on a Bible and was told to leave Herzliah High School, the Hebrew day school in Montreal he was then attending. I also did my secondary studies in a Hebrew day school in Montreal (a different one) so it’s not hard for me to picture the consternation this gesture must have caused. 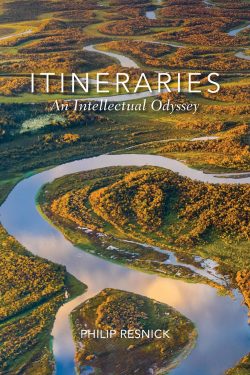 Resnick’s departure from Herzliah marked his abandonment of organized religion, but he notes a number of ways in which he has been marked by his Jewish upbringing. Perhaps the most significant is his consistently serious engagement with ideas, strongly suggested in his list of Jewish “cultural heroes,” from Spinoza to Einstein, Freud, Kafka and Arthur Koestler – none of them conventionally religious. At Herzliah he also would have had his love of language nurtured by his English teacher, Irving Layton, one of the leading Canadian poets of his time and mentor to Leonard Cohen.

Resnick would travel widely, both geographically and intellectually. His Jewish influences blended with many others. Itineraries contains vignettes from Belgium, Spain, the Soviet Union (as it was then), Australia and Japan, among other places, along with a more extended engagement with France. But the place that affected him most deeply and became his “second home” was Greece – an adopted homeland through his wife Andromache, to whom he was married for 45 years until her untimely death in 2016. Greece, of course, is home to one of the world’s great intellectual traditions, and the frequency of Greek references in Resnick’s poems testifies to how thoroughly that tradition became part of his thought.

Much of Itineraries is taken up with reflections on the issues and concerns that have engaged Resnick as a political scientist, including socialism, democracy and academic freedom. Questions of Canadian identity and Canada-Quebec relations figure prominently. Coming of age in Quebec at the time of the Quiet Revolution of the early 1960s, he carried a sympathetic view of progressive Quebec nationalism with him to his new home in Vancouver, and favoured the Yes side in Quebec’s first sovereignty referendum in 1980. That sympathy was severely strained by the widespread support among Quebec nationalists for the Canada-U.S. free trade deal in 1988 – a deal he and most other people in English Canada who shared his political leanings strongly opposed. During the Meech-Charlottetown imbroglio of the late 1980s and early 1990s, he became a leading commentator in English Canada on what was at stake and the possible future of the country. His observations on all these matters in Itineraries are lucid and judicious, if short of groundbreaking.

But it was the more personal chapters, the ones (even if written in prose) where Resnick the poet is allowed to come to the fore, that I found most compelling. A memoir such as this is at its best when it presents to the reader not just a mind confronting a series of problems but a sensibility – what Resnick’s teachers at Herzliah might have called a soul. Itineraries comes close enough for it to be a satisfying journey.

A book-length collection of Resnick’s “pandemic poems,” of which Inroads has published a substantial selection in the last two issues, is due out in the spring.