At the end of September, the NDP stayed the execution of the latest Harper government. Soon after, polls started showing the Liberals in free fall – triggered mainly by Michael Ignatieff’s insistence on forcing an election almost no one wanted.

It is possible that Ignatieff, in trying to topple the government for no apparent reason, turned away so many voters as to make a Conservative majority possible. But not likely. In the cold light of day, even under our electoral system, which gives a bonus of extra seats to the party that comes in first, there are not enough voters ready to be governed by a Harper majority responsible only to itself.

Political science undergraduates used to learn about Italy as the model of dysfunctional political institutions, characterized by frequent elections and constant uncertainty under minority governments at the mercy of shifting political alliances. Italy transformed its electoral institutions in the 1990s, and while hardly perfect now – as the antics of Signor Berlusconi demonstrate – it has lost its place as model of dysfunctionality among stable democracies to, of all countries, Canada.

Apart from us Canadians, political scientists used to pay little attention to Canada. It was, after all, rather predictable: it typically returned (Liberal) majority governments, and when it didn’t, the situation was temporary. But Canada also changed in the 1990s, as the advent of the Bloc Québécois upset the old balance, and then it changed again in 2003 with the merger of Reform/Canadian Alliance with the Tories. I wrote in the Summer/Fall 2008 issue of Inroads,

And that was before the 2008 election which, despite the weakest Liberal showing anyone can remember, delivered no majority government. It seems, finally, to have become a matter of conventional wisdom that we are stuck with minority governments and the instability that goes along with them.

One reaction has been to “blame Quebec.” In his postelection column, Jeffrey Simpson denounced Quebecers for voting for the Bloc, in effect telling Quebecers that now that they have been recognized as a nation, they should stop acting like one. A more practical reaction would have been to note that since more than half of Quebec francophones voted for federalist candidates, under a proportional system of representation the Bloc would have won 28 rather than 50 seats.

At a deeper level, the blame-Quebec reaction has most recently been articulated by Brian Crowley in his book Fearful Symmetry. As Crowley put it in his September 26 op-ed in the Globe and Mail, Canada is held back by a Quebec “that cannot pay its own way or reproduce itself, that is highly dependent on transfers from the rest of the country, and that is losing its political influence.”

Whatever the merit of such views, they are beside the point when it comes to dealing with Minority Government. Short of waiting for Quebecers to die out or jettison Quebec nationalism, the remedy for the chronic uncertainty of Minority Government lies in the reform of political institutions. At the core of such a reform is the adoption of an electoral system based on a form of proportional representation (PR) – not the extreme dysfunctional version of the old Italian system, but one modelled on effective versions in Scandinavia, Germany, New Zealand and Scotland that I have been writing about for many years.

It is possible to debate the overall merits of PR, but there can be no question that it is better suited to minority government than our current system. I can illustrate this with some recent election results. In Norway’s mid-September election: the centre-left coalition won narrowly (the first time in 16 years that an incumbent government was returned to power since now oil-rich Norwegians are always disappointed by their governments). It won because it effectively exploited the differences within the centre-right alternative coalition over the role the populists would play if they formed the government.

This parallels what happened in Sweden three years ago, except on the other side. For the first time, Sweden’s non-socialist coalition had a clear common program and steadfastly held to it during the campaign, rendering moot the usual Social Democratic attack on the incoherent bourgeois alternative.

In Germany, at the end of September, Angela Merkel’s CDU-CSU together with the Free Democrats won a majority. One reason for this is that there was no alternative on the centre-left, as a result of the inability of the Social Democrats to come to any arrangement with both the Greens and the Left party. In the case of Germany, the population’s insistence on stable government’s would have meant a renewal of the grand CDU–Social Democratic coalition if the centre-right hadn’t won more than half the seats. 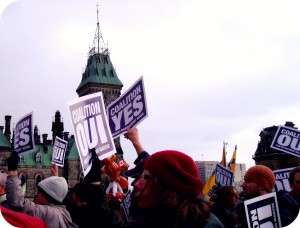 What all these examples show is that, unlike our system, a well-designed PR system not only provides a fair representation in the legislature of the strength of popular support for the different party positions, but is also responsive to the people’s yearning for stability. This is because it has built-in incentives for creating and maintaining effective coalitions. Canada’s politicians are no worse than those in Germany or Scandinavia, but our institutions turn them into narrow, short-term, partisan political actors.

To see this, we need only reflect on what happened after the 2008 election. Though not a word had been mentioned during the campaign of a possible Liberal-NDP coalition supported by the Bloc as an alternative to the Tories, the special circumstances in the weeks following the election gave rise to the possibility. Hurrah, applauded Canadians left of centre: finally a real alternative to the Tories.

Yet once the Harper government saved its skin, with the help of the Governor General and the fact that the coalition had little support outside of Quebec and urban Ontario, talk of a centre-left coalition ceased. And now that we are again in pre-electoral gear, the very idea is off the table. Why is this so? If it was a good idea in November 2008, how can a centre-left coalition be a bad idea in November 2009?

The answer is simple. Under our system, the closer two parties are in their programs, the more they fight for the same voters in the same constituencies and the less capable they are of cooperating before an election. The problem, to paraphrase Shakespeare, lies not in our stars, but in our institutions.