Bill Bishop
The Big Sort: Why the Clustering of Like-Minded America is Tearing Us Apart
Boston: Houghton Mifflin, 2008
370 pages.

Feelings about American cities have always been mixed: some seek the centre, others flee from it. Edward Glaeser (like Richard Florida) celebrates city centres as magnets for ambitious people who seek richer and happier lives. “The enduring strength of cities,” Glaeser writes, “reflects the profoundly social nature of humanity.”

Nonetheless, we can see that many people prefer to express their social nature in suburbs or other kinds of decentralized living. Joel Garreau, for example, has argued that the real action has shifted to the urban margin, in the “edge cities” that have mushroomed up at freeway intersections 30 or 40 kilometres out. Going farther yet, John Kasarda locates the future in the “Aerotropolis.” New airports come first, on the outskirts of Bangkok, Dubai or Seoul, then a new kind of agglomeration follows them. Grandiose terminal buildings, built to the scale of 50 million passengers a year, are the cathedrals of the 21st century. Centrality yields to accessibility: Bangkok’s new airport at Suvarnabhumi is within three and a half hours’ flight time for one third of the world’s population. 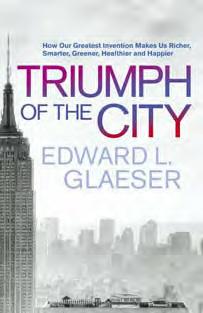 These rival visions also divide those who look to the past and want to revitalize the traditional kind of city from those who look to the future and see old-style cities as obsolete. In the United States, this division pits Democrats against Republicans, the centre against the suburbs, the public against the private, the subway against the freeway. Edward Glaeser has lived most of his life in Manhattan and Boston, and he makes a vigorous case for the central city. But in Triumph of the City he slides over the fact that many U.S. cities have been experiencing more trouble than triumph.

Of the 16 largest U.S. central cities in 1950, six have now lost more than half their population. Detroit, probably the sickest of them all, has lost 58 per cent. Many of these declining cities have suffered from the hollowing out of U.S. manufacturing. But there are two broader and more powerful reasons for decline: the attraction of suburban living, and self-segregation by whites as many city centres have become predominantly black. American urbanization, like American politics generally, is still haunted by the legacy of race.

In recent years these population movements have taken on a more complex form, which Bill Bishop has called The Big Sort. Glaeser does not mention this book, but it gives a more convincing picture of where the United States is going. More and more Americans are choosing to live in “like-minded clusters” – often inside walls and gates – that are both politically and economically homogeneous.

There are now “Blue” towns and “Red” towns; on a larger scale, the liberal dwellers on the east and west coasts inhabit a different world from conservatives living in the midwest and south. 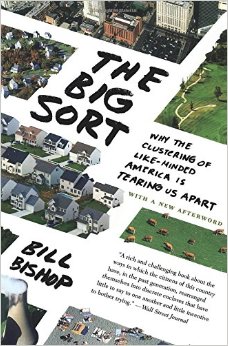 Bishop focuses on the massive increase in “landslide counties,” where more than 60 per cent of voters favoured one or the other presidential candidate. These areas, he argues, are becoming the geographical bases for rival tribes, where political allegiance is only part of an interlocking set of lifestyle choices. In Republican landslide counties, people have guns in their houses and oppose abortion; 45 per cent of the adult population belongs to a Bible study or prayer group. In Democratic landslide counties they fear global warming, favour gay marriage, drive Volvos and call their dog “Che.”

Counties voting for Bush in 2004 averaged 110 people per square mile; for Kerry, 836. As Karl Marx spins in his grave, Democratic landslide counties have higher levels of income and education than Republican ones. Instead of clustering around the political centre, opinions are polarizing, and this process expresses itself spatially as people move to be with their own kind.

Bishop does not consider the intellectual roots of American urbanism, but what is going on now resembles the kind of Puritan revivalism that has recurred throughout American history. John Winthrop’s “City Upon a Hill” defined American exceptionalism by proclaiming the ideal of a likeminded “godly” community. In Gore Vidal’s quip, the Mayflower colonists did not sail for New England because they were being persecuted, but because they were not allowed to persecute others. They had settled in Holland, the only country in the world that had established religious tolerance; but they feared that their children were absorbing the pluralist values of Dutch society. Once in New England, the Puritans could enforce conformity and drive heretics into exile. Quakers and witches could be hanged. When cities later became more secular and diverse, the alternative was the Frontier, an area of radical freedom and black-and-white values.

If most Americans are now living by “the Big Sort,” then the “creative city” touted by Glaeser or Richard Florida may be the exception that proves the rule. A dominant tendency in American culture has been the pursuit of mobility and outward expansion, a search for the “great good place.” Only a few cities formed dense pedestrianized European-style centres, usually because they were founded on peninsulas or islands: Boston, New York, San Francisco, Seattle.

These cities do indeed thrive, thanks to their financial or intellectual resources. But there can also be vitality in different models. Sprawling, doughnut-shaped cities like Phoenix, Houston or Dallas manage well enough without a residential downtown. There are also decentred creative regions, like Silicon Valley or the periphery of Washington, D.C. College towns or corporate campuses give a third model: Stanford University (familiarly known as “The Farm”) has become preeminent thanks to its 3,000 hectares of land. (Canadian universities are more likely to be in city centres, though it is not clear how much advantage they have gained from this.)

Greenwich Village and North Beach, as bohemian neighbourhoods, have certainly contributed to the success of New York and San Francisco. But Richard Florida’s idea that such areas are now central to economic development probably puts the causative arrow the wrong way round. Those two cities became the financial centres for the east and west coasts long before they became bohemian meccas for recent college grads. Bright ideas do not come to fruition in college dorms or trendy bars. As the movie The Social Network shows, their practical success is driven by networks of venture capital, a system that has little to do with bohemianism.

Dense city centres still have their uses, of course, even in the United States. As Glaeser notes, they have a lighter ecological footprint than sprawl cities like Los Angeles or Phoenix. The inhabitants of Dallas use more than three times as much energy per capita as those of New York City. Nonetheless, the United States will not easily give up its culture of McMansions, cheap gas and likeminded suburbs. Republicans will fight doggedly against government subsidies to mass transit, or zoning that promotes densification. Michele Bachmann has promised that if she is elected president, gas will sell for less than two dollars a gallon. On the other side, liberals and environmentalists are often the most rabid NIMBYites; they do their bit to ensure that housing in desirable cities will remain scarce and expensive.

Where do Canadian cities fit into Glaeser’s scheme? He has nothing to say about Toronto or Montreal. Vancouver he calls a success story as a “consumer city,” thanks to Asian immigration and a positive attitude to densification. What has been built on Vancouver’s downtown peninsula is certainly impressive, and its formula of residential towers, transit and public space is highly efficient. As Glaeser notes, a 1,200-square-foot apartment in a 40-storey building takes up 30 square feet of land – the size of a grave. In Vancouver, that apartment uses about $30 worth of electricity a month, including heating. Yet the low running cost of such compact space is dwarfed by the purchase cost – currently at least five times as much as similar space in a Sunbelt suburb.

Glaeser’s praise of Vancouver omits the awkward fact that it now has some of the most expensive housing in the world. This might not matter if incomes were equally high. New York and London have very high incomes because they are global financial capitals, and much of their wealth ends up in bricks and mortar. Incomes in Vancouver sit at precisely the Canadian average; in Calgary, incomes are one third higher and housing costs half as much. How long can this go on? Glaeser argues in a circle on this issue: when housing is expensive relative to income, he says, that just gives us a measure of how much people are willing to pay for “quality of life.”

Vancouver housing prices have become stratospheric because the city is relatively small, has geographical limits and is an international safe haven – the Zürich or Geneva of North America. But Switzerland has a closed door to immigration, Canada an open one. On the west side of Vancouver, about 600 houses are listed for sale at a given moment, and the only way to build a new house is to demolish an old one. China alone now has more than 500,000 people with a million dollars to invest, so a real estate bubble in Vancouver is probably unavoidable.

The weakness of the local economic base may be obscured by the flood of money coming in from the nouveaux riches of developing countries. But in the long run Vancouver needs to gear up its indigenous economy, and it’s not clear how that can be done. Glaeser suggests that manufacturing cities are in decline and “idea cities” on the rise. If so, what is Vancouver’s “idea,” beyond its natural beauty and agreeable lifestyle? Where are its “idea businesses,” on the scale of Microsoft or Amazon in Seattle, Intel or Nike in Portland?

The “Vancouverism” model is a huge bet on two propositions: that the expansive development of post–World War II North America can be reversed, and that a vibrant centre is bound to generate sustainable economic and cultural wealth. Glaeser largely takes such a “triumph of the city” for granted.

It makes for a good story, but urban history has followed a more erratic course. The white middle class has been fleeing American cities for decades out of dislike for one of the things cities do: force people of different races or incomes into proximity with each other. If oil rose above $200 a barrel, Vancouver could manage while U.S. sprawl cities would be in crisis; even so, politicians might respond by reducing gasoline taxes even further.

In any case, how quickly can they change their urban model? Vancouver’s dense centre has taken more than 50 years to build, since the West End was up-zoned in 1956, and it still accommodates only 5 per cent of the Lower Mainland population. Cities like Florence or Amsterdam have historic density, but have succumbed to the monoculture of tourism. Detroit and Dubai, in their different ways, are now facing collapse. Public transit may bring 100,000 people a day into the centre of Vancouver, but wealth and happiness are not guaranteed by their presence. As we have seen here and in London, the creative crowd can quickly turn into the destructive mob. Cities do demonstrate “the social nature of humanity,” but the better side of that nature does not always triumph.