Why pay when you can get stuff free? The Internet has not only fuelled the desire to get something for nothing but has allowed people to believe that only the stupid pay for music, movies, video games – or news.

There’s a certain reckless, albeit anonymous, bravado in this stick-it-to-the-man-and-the-big-corporations attitude. But it’s a chimera that defies the most basic principles of economics. While everybody seems to accept that it takes millions of dollars to make movies, people either don’t realize or don’t care that it also costs millions of dollars to produce daily newspapers, which even in these troubled times remain the primary source of investigative reporting.

Perhaps people don’t care because, traditionally, advertising produced so much revenue that the owners were able to sell their product at far below cost. Even in markets where the subscriber base is stable, a dollar a copy for a metro paper doesn’t come close to covering production costs. But for almost everyone under 35, paying anything is too much. And why would they pay? In newspapers’ rush to embrace the Internet, publishers have been giving away more and better information free online than they provide to their loyal paying subscribers. Check almost any North American newspaper on any given day and there will be at least one story that you would really like to read, but can’t unless you go to the website. 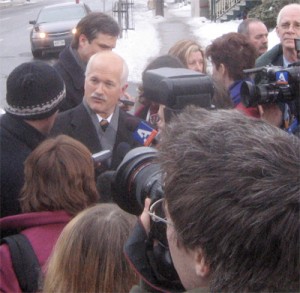 Social cohesion may survive without the shared experience of blockbuster movies or everyone knowing the latest about Britney Spears. But can our democracy survive without news – without shared knowledge of what is happening in the local community, the province, the country or the world? What happens if there is nobody at City Hall or the courthouse to report on what happens? What if there are no journalists filing freedom of information requests, asking difficult questions or ferreting out the stories that corporate and political spin-doctors try to hide? How are you going to know about a polluting industry in your community, a neighbour who has discovered an amazing cure, how your MP voted or what the Canadian troops are doing in Afghanistan? How will you decide how to vote? Will you even care?

The Pew Foundation’s Project for Excellence in Journalism recently surveyed 145 citizen and 218 newspaper sites (labelled “legacy news” as if newspapers were already dead). On citizen sites, it found, “the range of topics is narrower and the sourcing somewhat thinner than on legacy news sites, and the content is generally not updated even on a daily basis.”

“That isn’t surprising,” wrote columnist Stephen Hume, my colleague at the Vancouver Sun. “Lack of revenue seriously limits news-gathering resources. Enthusiasm only carries one so far.”

The Pew study also found that newspaper websites carried 89 per cent news, compared to only 56 per cent on citizen sites and 27 per cent in blogs. Despite the perception that new media are bolder when it comes to covering controversial subjects, the Pew study found that the Iraq war, for example, has almost disappeared from citizen sites, but not from newspaper sites. What’s missing from the citizen sites and blogs is investigative reporting. Even these days with anorexic staffing levels, newspapers still break most of the stories that provide the fodder for successful online publications like the Huffington Post.

Even among online journalists, a majority (54 per cent) of the 300 interviewed by the Pew Foundation said they believe journalism is headed in the wrong direction. According to the study, released in March, the majority also believe that the Web is changing the fundamental values of journalism for the worse. In particular, online journalists worry about declining accuracy, due in part to the emphasis on speed and being first with the news.

Increased Web competition is only a part of the story of the big media corporations’ struggle to survive. Like most entrepreneurs this past decade, newspaper owners longed to be monopolists and, urged on by their pals on Wall Street and Bay Street, plunged their companies so deeply into debt that it will take a miracle for some of them to survive intact – even if they succeed in retooling to compete on the Web.

Extraordinary cost-cutting measures have been imposed. There is scarcely a newspaper in North America that hasn’t cut staff substantially while imposing increased productivity demands. It’s a rare journalist these days who isn’t asked to blog, twitter, do podcasts and even shoot video in addition to their “regular” work. Coverage – even of election campaigns – has been curtailed. Out-of-town trips are increasingly rare. At some papers, staff have been told to limit the amount of photocopying they do, and then it must be on both sides of the paper. Buses have replaced taxis as the way to get to in-town assignments. Skype and 1-800 numbers are recommended for reporters placing long-distance phone calls.

In the United States, 33 newspapers or more are in bankruptcy protection. The Seattle Post-Intelligencer and Denver’s Rocky Mountain News have folded. As I write this, the debt of the company I work for, CanWest Global Communications Corp. (owner of Canada’s largest chain of newspapers and the Global Television Network as well as newspapers and television stations in Australia), is close to $4 billion. CanWest Global has suffered a $1.44 billion net loss in the first quarter of 2009, including a $1.2 billion writedown of “goodwill, intangible assets, property and equipment” in its publishing operations. That followed a $1 billion writedown of TV holdings in late 2008. In late April, it was given yet another two-week extension by its lenders and noteholders to try to avoid having to file for bankruptcy protection.

Nor has anyone yet figured out how to make money from websites – a crucial step since advertising revenue in traditional news media dropped 23 per cent in the United States in the last two years, and that’s before the recession was full blown. Canadian numbers mirror that.

Delivering the keynote speech at the Newspaper Association of America’s recent annual conference, Google’s chief executive, Eric Schmidt, recommended that newspapers move beyond being “trust content providers” to being “content aggregators and marketers.” But he didn’t provide any real specifics, nor did he offer to share with publishers the $22 billion Google News earns annually from advertising on its site that aggregates news from newspaper and other mainly mainstream media sites. Among the new financial models suggested by Canadian media owners is revenue-sharing: a fee built into Internet service providers’ subscription rates, similar to the fee collected by cable companies and passed on to television stations and networks.

Even online publications are struggling to make ends meet. The cost of covering British Columbia’s May provincial election was out of reach for the online Tyee (www.thetyee.ca), so its editor, David Beers, made an unusual plea for money while asking readers what issues they wanted covered. In his April 10 article, Beers said he and the staff “are paying close attention to the specifics donors mention when they make their contributions. For example in the environment category many have instructed us to focus on run-of-river energy projects and transportation.” Further on, Beers wrote, “See an issue you’d like to bump up a little higher? Want to put something different on the Tyee’s agenda – and in the minds of B.C. voters?” The gambit raised close to $20,000, but it also raised the ethical question of whether special-interest groups could buy favourable coverage.

Another Pew Foundation study, released in February, found rather surprisingly that the number of journalists in the Washington, D.C., press gallery hasn’t declined along with the number of newspapers. But newspaper journalists have been replaced by niche reporters writing for specialized elite audiences, with narrowly targeted financial, lobbying and political interests, who are willing to pay high subscription fees. Among the special-interest buyers are defence contractors, oil companies and mobile phone alliances. As the study says, “For those who participate in the American democracy, the ‘balance of information’ has been tilted away from voters along Main Streets … to issue-based groups that jostle for influence daily in the corridors of power.”

I confess to more than a passing interest in the health and survival of newspapers. I can’t help getting angry when I read media analysts who blithely dismiss economic concerns as something that someone else should think creatively about and then go on to say that media transformation is not endangering citizenship or democracy.

There is a reason that modern, liberal democracies provide special recognition and status for the fourth estate. There is a reason why one of the institutions that needs to be built in new democracies is a free – as in unfettered – press. The reason is that democracies thrive only if they have well-informed, educated and engaged citizens. For centuries, newspapers and their journalists have been committed to doing that. Somehow, some way, they need to be given the chance – whether in hard copy or electronically – to do it in the future as well.

Daphne Bramham writes a social affairs column for Inroads and is a columnist for the Vancouver Sun. Read More