What lessons can be drawn from the electoral earthquake of April 7? Before we construct political hypotheses, we need to look at the figures (table 1). They are eloquent.

There was a move from the PQ to the Liberals among francophones.

The second major fact is the CAQ’s inability to attract a single new voter. On the contrary, the CAQ lost 17 per cent of its 2012 vote. This reality was masked by the CAQ’s decline before the campaign and then its partial recovery during the campaign. But it signifies that the CAQ, like the PQ, appears to be structurally condemned to a stretch in opposition.

The third major fact is the absence of a shift from the PQ to Québec Solidaire, despite the arrival of Pierre Karl Péladeau. There was no hemorrhage of left-wing Péquistes. This reality was masked by QS’s gain of one seat (for a total of three), won narrowly in east-end Montreal.

How the campaign progressed

To understand the reasons for this shift of the PQ’s francophone vote toward the Liberals, we need to look back at the progression of the campaign, as can be seen in the trend lines in figure 1, compiled by Claire Durand. These trend lines were taken from an aggregate of all the polls, adjusted for a correct division of the undecideds. 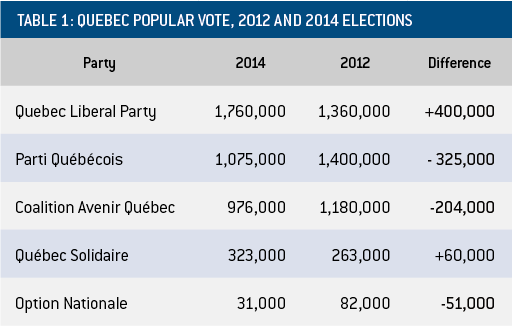 The first vertical line represents the arrival of PKP. You can see that the rise of the Liberals began before his arrival and continued afterwards, until the first debate (second vertical line).

The PKP effect, then, contributed to maximizing the Liberal vote.

After the first debate, the PQ’s francophone vote drifted to the CAQ, which regained some of its 2012 votes.

What political conclusions can be drawn?

Here are my hypotheses. There were many factors in play, and I don’t claim to describe all of reality. But I don’t think I’m wrong in drawing out these prinicipal elements:

1. The PKP effect: Pierre Karl’s arrival had a major effect. Until then, Quebecers perceived the Marois team as capable of governing as a sovereigntist government, but undoubtedly incapable of acting on its intention of holding a referendum.

When a business titan such as Pierre Karl announced that he was joining the PQ, that changed everything. Sovereigntists (and who can blame them?) enthusiastically greeted his arrival as providential, saying that it would calm people’s fears. Amplified by this chorus of applause, the PQ + PKP combination gave new credibility to the hypothesis of sovereignty. 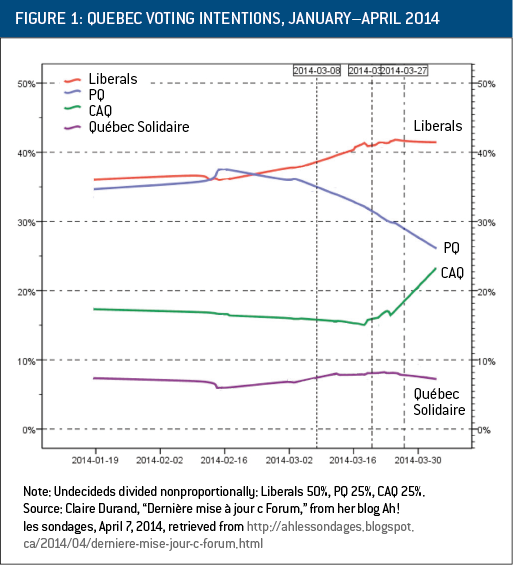 And for half a million francophone Quebecers, this credibility reawakened a strong aversion to embarking once again on the adventure of a referendum. I’ve written extensively in the past on Quebecers’ legitimate fear of failure. It showed up in the last phase of the 1998 election campaign. Polls were showing Lucien Bouchard way ahead. However, this anticipated victory had the effect of reawakening the fear of a referendum. In the end, enough voters switched from the PQ that M. Bouchard obtained only a truncated mandate: he won more seats than the Liberals, but lost the popular vote. It was a strong anti-referendum signal. This was three years after the 1995 referendum.

Now two decades have passed since that event, and the same anti-referendum reflex has made itself felt, even more strongly …

2. The integrity issue: From the first debate on, integrity became a major theme. The Liberals’ rise ended at this point, so it would seem that the blow hit its target. Philippe Couillard’s palpable discomfort in the second debate, where he was on the defensive, no doubt continued to disqualify the Liberals in the minds of some voters, who at the same time were seeking to avoid a referendum.

However, the counter-accusations levelled against Mme Marois’s husband (even if they were nowhere near being commensurate with the criminal investigations involving the Liberal Party) contributed to muddying the waters. It’s reasonable to conclude that, overall, the Liberals plateaued as a result of the integrity theme, but at the same time, PQ voters who were resistant to a referendum now had an additional reason to check out the CAQ, which was essentially spared by the allegations …

3. The Charter effect: Before the campaign, polls indicated that a majority of Quebecers supported the Charter as it was proposed by the PQ, and in particular the ban on government employees wearing conspicuous religious symbols.

Voters were offered a choice among three options: the PQ’s strong stance, in tune with public opinion; the softer stance taken by the CAQ and Québec Solidaire; and the Liberals’ refusal to act in, shall we say, a conspicuous manner.

These figures were considerably lower than voters’ desire to prevent a referendum, at 27 per cent, or to have one, at 13 per cent.

Was this avoidable?: It’s possible to imagine a campaign in which identity questions, such as the Charter and language, would have played a more central role. This could have had the effect of increasing the weight of these questions relative to other election issues …

The introduction of substantial proposals to improve the way Quebec welcomes immigrants, which unfortunately passed unnoticed, could have been better planned. This would have placed the proposed Charter in the context of a coherent and more attractive whole for Liberal, CAQ and Québec Solidaire supporters who were in favour of the Charter. Better management, from the beginning, of the question of people losing their jobs because of the Charter wouldn’t have hurt either.

But no matter what clever strategies had been employed, their impact would have been marginal. The PKP effect, and the anti-referendum wave it provoked, would have swept away all these plans. It would have taken much more to avoid the electoral drubbing of April 7.

Of course, you can replay the match from beginning to end. You can critique strategies and tactics, preparations and communications. There is much to chew on.

But the elephant in the room is now clearly visible. For the foreseeable future, a significant share of the electorate is resistant to the idea of a referendum. So resistant that they would prefer to plunge Quebec back into years of Liberal rule rather than taking another look at the choice of a country.

This elephant is a tough creature. There are undoubtedly a number of ways of living with it – because it’s not going away soon. But, in the discussion that’s now beginning, we need to acknowledge that the elephant is among us.