A review by John Richards 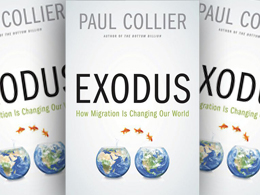 Paul Collier begins this book with a précis of his family history. Prior to the First World War, his grandfather, Karl Hellenschmidt, migrated from an impoverished German village to Bradford, at the time a prosperous city in northern England. Come the war, a “gutter rag” newspaper labelled Hellenschmidt a traitor and a mob ransacked his shop. Hellenschmidt was interned; Paul’s grandmother sank into terminal depression. His father, age 12, left school to run the shop. A quarter century later, the threat of European war reemerged and Paul’s father decided to change his name and his identity and become English.

Given this prologue, you might expect Collier to have written a book denouncing “host country” nationalism and accompanying xenophobia towards immigrants. You would be wrong: the prologue is there to disarm critics tempted to dismiss Collier as a bigoted “little Englander.”

Collier’s opening gambit is a critique of conventional wisdom among Western elites. Too many favour open immigration and multicultural policies, and refuse to admit the potential costs of immigration and its distributional consequences among citizens of the host country. This political correctness has, he argues, blocked rational discussion of the pragmatic and ethical implications of large-scale immigration. Collier advocates fairly tight immigration restrictions, particularly on ethnic groups with cultures dramatically divergent from Western liberal norms, and active policies to integrate ethnic-minority diasporas into the cultural mainstream of the host country.

Collier is an economist, currently at the University of Oxford. However, he spent much of his career working in sub-Saharan Africa analyzing why sub-Saharan countries are mired in poverty. He belongs in a major school of academics who attribute escape from poverty into industrial prosperity primarily to institutional factors that, for random reasons, first coalesced in Renaissance Europe.

Niall Ferguson, prolific historian and public intellectual, is another prominent academic in the institutional school. Somewhat glibly, Ferguson has summarized institutional analysis through the image of “killer apps” – institutional arrangements first developed by Europeans but now being successfully downloaded by many countries in east and southeast Asia. These “apps” include Lockean ideas legitimizing private property, the common law (an institution to defend property rights from the executive arm of the state), respect for universal education and scientific inquiry, and an Aristotelean sense of a state strong enough to contain the excesses of class and religious conflict but not strong enough to control civil society.

Britain became the first European country to industrialize because of a set of fortuitous events. Queen Elizabeth I worked out a compromise between Catholics and Protestants, which spared England the religious-inspired civil wars that ravaged continental Europe in the 16th and 17th centuries. A freak storm wrecked the Spanish Armada in 1588. A century later, English parliamentarians successfully pulled off a constitutional coup with minimum violence. They obliged the Catholic King James II, who was intent on reestablishing a Catholic monarchy, to abdicate, and they enacted a bill of rights, the basis for a constitutional monarchy.

At the heart of the institutional argument is the role of social trust, between individuals and between organization leaders. In a society of high social trust individuals and organizations respect the rules of the game, not always but most of the time. In such societies complex long-term contracting between strangers in the world of commerce is by and large feasible, and the state can undertake ambitious spending with the confidence that civil servants will by and large perform their assigned tasks and citizens will by and large pay their taxes.

Institutional economics is implicit throughout Exodus. Europe and the European settler societies are prosperous primarily because of high trust and the “killer apps.” Understandably, would-be migrants from poor societies want access to high-trust societies where their skills can, even in menial work, generate a large premium over earnings in their country of origin. In sum, migrants unambiguously benefit from migration.

What about members of the host society?

There may be complementarities of immigrant skills with those of indigenous workers. There may also be net benefits in the sense that immigrants’ tax payments exceed the cost of the public services they consume – if immigration is limited to working-age adults with few dependents. These aggregate benefits, however, may be unevenly distributed. High-income members of the host society may obtain better services at lower cost than otherwise, while low-income host society workers experience stagnant wages. Ultimately, Collier concludes, the economic benefits to the host society are likely to be marginal.

The answer to the question must go beyond simple economic calculations. The central problem Collier emphasizes is that posed by Harvard political scientist Robert Putnam. Putnam is one of the leading academics to have advanced the thesis that trust is a kind of capital asset in any society, along with physical plant and equipment, public infrastructure and a well-educated work force – all of which are necessary for industrial prosperity.

Migration enters the story through the impact of ethnic diversity on social trust. In a controversial article to which Collier refers, Putnam concluded that, at least in the short run, higher ethnic diversity means lower intergroup trust:

In the short run … immigration and ethnic diversity tend to reduce social solidarity and social capital. New evidence from the US suggests that in ethnically diverse neighbourhoods residents of all races tend to “hunker down.” Trust (even of one’s own race) is lower, altruism and community cooperation rarer, friends fewer. In the long run, however, successful immigrant societies have overcome such fragmentation by creating new, cross-cutting forms of social solidarity and more encompassing identities.

Collier discusses a multitude of empirical studies on immigration from which he draws three fundamental conclusions:

Not surprisingly, the probability of immigrants seeking to leave their country of origin for a high-income host country depends on the average per capita income gap between the two. In the case of France and England, this means a large share of migrants are from ex-colonies – from the Maghreb and francophone west Africa for France, from South Asia and the Caribbean for England.

The probability of migration is higher if there exists, in the host country, a large diaspora into which the immigrant can readily fit.

If Putnam is right – and Collier thinks he is – large-scale immigration from societies culturally far removed from that of the host society, living in a diaspora with few “cross-cutting forms of social solidarity,” leads to a significant overall lowering of social trust in the host society, which in turn endangers political compromise and encourages political extremism.

The examples that motivate Collier include the large diasporas of Pakistani and Bangladeshi origin in England. (The four Pakistani-origin young men who killed nearly 60 Londoners in a suicide mission in 2005 were, coincidentally, from Bradford.) Another is the Caribbean-origin diaspora, which erupted in violence in 2012, riots in which white Britons also took part. He discusses analogous events in France, such as mass incineration of automobiles in banlieues dominated by poorly educated, poorly integrated second- and third-generation Maghrébins.

The political upshot of relatively open immigration has been, in Europe, the growth of conservative populist parties hostile to immigration: the Front National in France, the United Kingdom Independence Party in Britain, and comparable parties in Holland, Sweden and elsewhere. At the time of writing, in April, polls indicate that a third of the seats in the European Parliament elections scheduled for May will be won by such parties.

So much for the economics and politics. What about the ethical implications of mass migration?

Liberal elites are typically drawn to a version of universal utilitarianism. In this view, that policy is best which maximizes the sum of benefits accruing to all concerned: members of the host society, migrants and those left behind in the country of origin. The elites acknowledge the need for quotas but they have no basis on which to assess how high they should be.

The immigrants clearly benefit from immigration. The benefits to members of the host society are ambiguous and often unevenly distributed. Those left behind in the country of origin may benefit from emigration via several routes, starting with remittances, which are an order of magnitude more important than official foreign aid. They also benefit to the extent that emigrants return to their country of origin, bringing with them enhanced human capital (due to education) or financial savings accumulated while working in a host country. However, if the state of governance is very low, emigration of the most capable may well be at a level that serves to entrench dysfunction. Collier cites Haiti: most decently educated Haitians are living in New York and Montreal. Were they living in Port-au-Prince, they would be less prosperous but their political weight would improve prospects for decent governance.

Collier’s best-known book, The Bottom Billion, is about those living in countries – primarily in sub-Saharan Africa and central and south Asia – whose societies have not adopted the killer apps. These societies are riven by tribal conflicts, religious wars and complex interconnected networks of extreme political corruption and instability. The elites in control of these states have been unable (or unwilling) to organize decent schools and primary health care for the majority. For those with the misfortune to live in one of these countries who have the means, emigration – whether it be legal or illegal – is an immensely attractive option. Extended families may choose a young family member to send abroad, with the expectation that he will settle in a high-income country, enjoy the massive increase in earnings emigration enables and remit a sizeable fraction to his family still in the bottom-billion country.

Canada is a particularly privileged country when it comes to immigration. Unlike the United States it shares no border with a low-income country; unlike western Europe it is an ocean removed from countries of the bottom billion. Canada has been able to impose strict immigration requirements in terms of education and knowledge of one of our two official languages. On the other hand, Spain, Italy and Australia have in common the fact that they are a relatively short boat trip from countries of the bottom billion. Free movement within Europe means that northern European countries often become the ultimate destination for immigrants from the African continent.

Collier admits to many moral quandaries. How generous should the offer of asylum be to refugees from the most dysfunctional of countries – Somalia or Syria for example? Is Australia legitimate in refusing access to the mainland for illegal immigrants captured at sea?

Collier does not offer precise answers to any of these quandaries. The ultimate value of Exodus is to free debate from both the guilt of host country liberal elites and elites’ blinkered perspective as beneficiaries of the high-quality, low-cost services immigrants provide.

John Richards is co-publisher of Inroads