One can be forgiven, upon looking at the final seat tally in the 2021 federal election, for wondering whether an election occurred at all.

Every party ended up with a seat total that changed by no more than two from the 2019 election, and only 23 seats out of 338 changed hands. Atlantic Canada broadly returned the same sort of Parliamentary cohort as it did in 2019, though with some noteworthy changes that are outsized for this relatively small region. Indeed, of those 23 seats that changed hands, six were in the Atlantic region. What the results from Atlantic Canada reveal is an ambivalent attitude toward the Trudeau Liberals, an uptick in Conservative fortunes that was a national outlier, and a shaking up of third-party fortunes that one finds upon scratching the surface of raw seat totals.

The dented but resilient Liberals

Atlantic Canada is still the strongest region for the Liberals, and the four Atlantic provinces delivered the party’s four highest vote shares. Overall, the Liberals won just under 44 per cent of the vote regionwide (table 1) and increased their support in every Atlantic province (table 2).¹ Nevertheless, their regional seat total of 24 (out of 32) was down from 26 in 2019, while the Conservatives won the remaining eight seats. The Liberals lost four seats to the Conservatives, while they gained St. John’s East from the NDP and – through the defection of Jenica Atwin earlier in 2021 – Fredericton from the Greens.

What explains the resilient, albeit dented, appeal of the Liberals in Atlantic Canada? A poll conducted by Leger Marketing a week before election day found that exactly the same proportion of Atlantic Canadians (46 per cent) were to some degree satisfied and dissatisfied with the Trudeau government.² While hardly a glowing sign of warmth toward Trudeau by Atlantic Canadians, they were notably less hostile towards the incumbent
government than other Canadians (table 3).

Perhaps a more telling sign of the state of mind of Atlantic Canadians is the decline in voter turnout (table 4). More than 100,000 fewer votes were cast in the region in 2021 than in 2019, and voter turnout dropped in every Atlantic province, with only PEI maintaining voter turnout above 70 per cent.

In 2015 the Conservatives in Atlantic Canada were annihilated by “Trudeaumania 2.0,” losing every seat and collapsing to only 19 per cent of the vote. The 2019 election saw a muted comeback, with the Conservatives winning just under 29 per cent of the vote and four seats, three of them in rural Anglo New Brunswick. They continued and broadened this rebuilding effort in 2021. Their vote share rose in every Atlantic province (to 31.5 per cent regionwide) and they managed to win an additional four seats. Two of these were the traditional Nova Scotia Tory bastions of Cumberland–Colchester and South Shore–St. Margaret’s, while the party also won Miramichi–Grand Lake in New Brunswick and Coast of Bays–Central–Notre Dame in Newfoundland. The latter win represented in first time the new Conservative Party managed to win a seat on the Rock beyond the Avalon Peninsula. Of the seven seats that the Conservatives managed to take from the Liberals in all of Canada, four were in the Atlantic region. 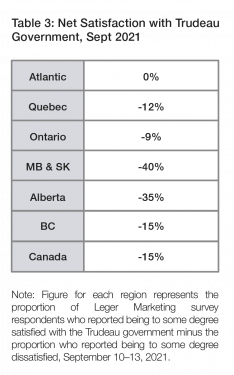 These pickups, however, can be deceptive. Across the region the Tories gained only 1,600 votes compared to 2019, and there remain few Atlantic ridings where the Conservatives can hope to knock off the Liberals without a major shift in support (only Fredericton and Sydney–Victoria saw a Conservative challenger come within 5 per cent of toppling a Liberal). The less socially conservative and more economically interventionist brand of Conservatism promoted by Erin O’Toole likely helped expand the Conservatives’ appeal in this more Red Tory of regions. While this expansion was only moderate, it was still a positive development for the Tories when compared to places such as the 905 Belt in Ontario, Edmonton or suburban Vancouver.

The challenges for the Conservative Party go far beyond questions of who the leader is or what coalition of tax credit recipients can best win seats in Mississauga. The party suffers from a general lack of intellectual depth and philosophical drive, with little resembling an articulated vision of what conservatism in Canada is about. These more fundamental questions must be addressed before the more wonky matters of policy and presentation can be tackled. Whether the modest rise in Conservative fortunes in Atlantic Canada can offer insights into either of these tasks remains to be seen.

The 2019 campaign saw the NDP and Greens challenge each other for the status of the region’s dominant third party and dominant left-wing force, and the outcome was a draw. Both parties secured a single seat, and only in Newfoundland did a Green surge fail to materialize. The Greens managed to beat out the NDP for third place in New Brunswick and PEI. 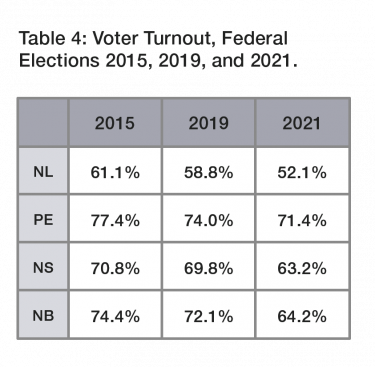 Already at the beginning of 2021, it looked as though the NDP was gaining the upper hand in Atlantic Canada, polling at twice the level of the Greens.³ Then, in June, whatever hope the Greens had of building on their 2019 success faded when Jenica Atwin, the Green victor in Fredericton in 2019, flipped to the Liberals.⁴ The defection sparked a Canada-wide airing of dirty laundry by the Greens, revealing long-brewing tensions within the party that effectively destroyed its credibility. As it entered the 2021 campaign, a party that often claimed to be the only one with the knowhow to deal with the climate change issue regarded as the greatest existential threat facing humanity was revealed to be little more than a petty circular firing squad.

The Green collapse in Atlantic Canada was spectacular. The party failed to nominate a single candidate in Newfoundland and was absent in two Nova Scotia ridings. Having won over 20 per cent of the vote in four ridings in Atlantic Canada in 2019, the Greens only managed to crack the 10 per cent mark in two ridings in 2021. In neither of these did it win more than 15 per cent. The Greens came in third place or better in 15 ridings in 2019; that figure was down to three in 2021. Moreover, the Green collapse was only slightly less severe in PEI and New Brunswick, both of which have strong provincial Green parties, suggesting that provincial Green coattails were rather frayed. Will the federal Green collapse affect the fortunes of the strong Atlantic provincial Green parties? In both New Brunswick and PEI the Greens are the undisputed left-wing force, with their rival NDP sections effectively nonexistent. This dynamic may be the sole factor that keeps the New Brunswick and PEI Greens in operation.

While the New Democrats easily secured the dominant third party title in the region, it was something of an empty victory. The NDP lost their one seat in St. John’s East with the retirement of incumbent Jack Harris and failed to make up for the loss elsewhere. Only in Halifax did the party come within striking distance of a win, with former NDP MLA Lisa Roberts falling short of defeating the incumbent Liberal by 1,558 votes. The NDP is now very much a force confined to the two largest urban centres of the region; of the seven seats where the NDP secured more than 20 per cent of the vote, all but one were in greater Halifax or St. John’s.

The most improved player

In the Atlantic region as elsewhere in Canada, the “most improved player” award went to the People’s Party of Canada (PPC), which more than tripled its regional vote share and gained more than 36,000 votes over 2019, in part because the party fielded 12 more Atlantic candidates than in 2019 (29 as opposed to 17). This is not to say that the PPC did very well by any stretch of the imagination, for “most improved” is a relative designation. Only one PPC candidate won more than 10 per cent of the vote (this being in Dartmouth–Cole Harbour, where the Conservative candidate dropped out just before the nomination deadline).⁵ That being said, the PPC’s rise in New Brunswick, where the party won 6 per cent of the vote, came ahead of the Greens overall and beat out the Green candidate in every riding it contested, does merit examination.

There is a long tradition of protest-fuelled populism in Anglophone New Brunswick, most evident at the provincial political level in the rise and fall of the Confederation of Regions party in the late 1980s and early 1990s and the emergence of the People’s Alliance as a political force to be reckoned with in the late 2010s. In part, then, the PPC’s showing in New Brunswick is merely a continuation of this phenomenon. However, the unique circumstances in which the 2021 election was conducted, in the midst of the ongoing COVID-19 pandemic, cannot be ignored. As commentator Matt Gurney wrote in early September,

Millions of Canadians are frustrated and angry – furious, even – about the public-safety measures taken to combat COVID-19. There is widespread consensus (with modest variation) for those policies across almost every mainstream party and leader in the land, leaving these millions of people with nowhere to go. The spike in the PPC’s polling numbers almost certainly do not reflect any kind of organizational coherence from the party; and they probably are not the result of any newfound public opposition to immigration or corporate subsidies – nor any kind of Max Mania! Rather, it is likely the inevitable consequence of a large number of people needing to park their anger about things like vaccine mandates, passports, and lockdowns somewhere.⁶

It is difficult to imagine the PPC doing as well as it did anywhere in Canada without the motivating trigger of the pandemic and government responses to it. There just aren’t that many voters out there who are interested in more established PPC talking points like ending supply management or eliminating foreign aid. Especially noteworthy about the pandemic-fuelled fatigue and anger and conspiracy-informed anti-vaxxer sentiment that propelled the PPC in New Brunswick is that for the first time in the province’s history protest populist politics crossed the linguistic divide. Past instances were almost entirely confined to New Brunswick’s anglophone population, in part because tension over language issues was one of the forces driving populist sentiment. This time the PPC did almost as well in primarily francophone ridings, coming in third in Madawaska–Restigouche.

That the PPC hit on a protest populist message that transcended the language divide in New Brunswick points to the possible emergence of a populist politics that is more universal and resilient. Indeed, the People’s Alliance of New Brunswick, long associated with anti-bilingualism stances that have made it toxic in French New Brunswick, may already be taking notes, given the party’s recent statements in opposition to vaccine passports.⁷ Whether the PPC can sustain its newfound support and grow further after the pandemic and the measures to combat it fade into history remains to be seen. But in an election that changed next to nothing overall, the PPC’s success at drawing attention to its populist message uniformly across New Brunswick is a development worth noting.

For more on the 2021 Canadian election, click to read ‘Mad Max’ and the Election in Which Everyone Lost, by Reg Whitaker. And for the rest of our Inroads 50 elections coverage, check out Elections Bring Change (Except in Canada).

¹ All references to federal election results and statistics, from 2021 or earlier, are taken or calculated from Elections Canada data.

³ During January 2021, the CBC Poll Tracker put NDP support in Atlantic Canada at between 16 and 20 per cent and Green support at between 7 and 9 per cent.