A personality at a distance profile

Stephen Harper presents a serious puzzle to students of Canadian politics. Often portrayed as a radically conservative ideologue, his policies on both the domestic and international fronts have been less dogmatic than most observers expected. In his column in the Winter/Spring 2008 issue of Inroads, Reg Whitaker referred to Harper as an “enigma” of “hidden depths, concealed agendas, complex contradictions” and listed several contradictory practices and policies.

A good part of the problem lies in his tight control over his organization and, especially, over what gets into the media. In such cases, more indirect methods can prove useful. One such method is the “personality at a distance profile” based on the work of political psychologist Margaret G. Hermann of Syracuse University. I here offer such a profile of Stephen Harper. The technique is used to compare leaders across seven key leadership traits, and is based on a content analysis of accessible data such as transcribed interviews (see box on p. 28). Its main application has been to anticipate how certain leaders are likely to act on the international stage.

Using the data, the analyst develops a profile based on seven traits: self-confidence, conceptual complexity, belief in one’s own ability to control events, need for power, task or affiliation focus, in-group bias and distrust of others. These are then compared with normed data from profiles previously constructed to rank the individual from high to low in a particular trait.

In Harper’s case, the findings (summarized in Table 1) suggest that – to use Whitaker’s terms – the liberal pragmatist has prevailed over the neocon ideologue, at least since 2001. 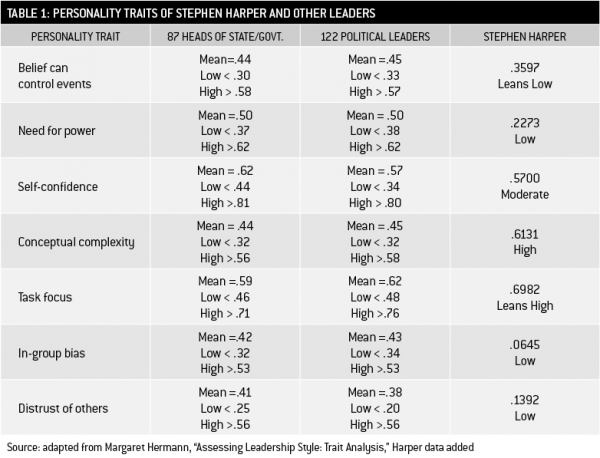 In comparison with 87 heads of state or government and 122 other political leaders in data aggregated by Hermann, Stephen Harper places as low-to-moderate in his belief in his own ability to control events. We would thus expect him to be somewhat cautious about the issues on which to focus, but willing to take the initiative when an issue is very important to him. Moreover, he should be willing to allow other members of his government to carry out the responsibilities of their portfolios with a moderate amount of interference or supervision. This is complemented by his somewhat surprising low rank in need for power. Leaders low in need for power are likely to try to empower others, accept being one among several having influence, and focus on developing a sense of team spirit, shared responsibility and clear goals.

Harper falls in the moderate range for self-confidence. Those in the moderate range will make some use of suggestions based on information, but are not likely to be blown hither and thither by every passing breeze of public opinion. Moreover, he scores high on conceptual complexity. Those high in this trait tend to see many shades of grey, seek out multiple sources of information and perspectives, and mistrust their first response. This may at times make him appear to be indecisive or to agree with individuals expressing contradictory opinions.

Harper is moderate to high on task focus, being somewhat more likely to stress the accomplishment of goals over building in-group loyalty and contentment. He is likely to discount some discontent, but is unlikely to be oblivious to problems that could disrupt his control of the group. Also somewhat surprising, given the general portrayals of Harper, is his very low score for in-group bias, which means that (comparatively speaking) he is less likely to view the world in zero-sum, us-versus-them terms. Those low in this category tend to take into consideration the context in which interactions occur and to adjust in-group and out-group categories accordingly. The tendency to be fairly even-handed when dealing with out-group members has served him well as head of a minority government and in his determination to maintain a strong, friendly relationship with the United States regardless of personal opinions about its leadership. 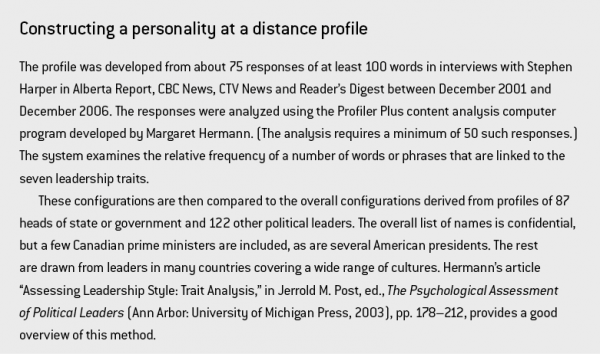 Finally, Harper also scores low on distrust of others. Those low in distrust tend to withhold judgement and allow a pattern of interaction to develop, basing their attitude on the accumulated experience. As a result, Harper is likely to have a fairly optimistic view of the political world and to be generally willing to cooperate rather than see the world in dog-eat-dog terms.

Hermann’s method then goes on to combine these basic traits to produce profiles of an overall leadership style. If we apply this method to what we have surmised of Stephen Harper, we get what she calls the reactive style of leadership. We should thus expect him to be opportunistic, picking and choosing his battles. Sensitive to constituencies and the various political players, he should either respect constraints or be direct and open in his use of power. Seeing the world in terms of opportunities, he will tend to focus on building relationships to take advantage of them. Since he is less prone to see the world in zero-sum terms than many of his counterparts, he will tend to maximize his flexibility of response and to look for institutions where cooperation can garner gains. The softwood lumber dispute and recognition of Quebec’s status as a nation come to mind as manifestations of this.

In sum, a content analysis of interview responses using Profiler Plus generates a profile of Stephen Harper as a crafty, context-savvy leader concerned with being informed about the relevant facts and the attitudes, beliefs and capacities of other players, seeking out situations where cooperation can lead to mutual gains. This is not to say that he is unlikely to make enemies: his ideological views and his reaction to constraints may make him susceptible to too blunt a use of power and lack of subtlety in dealing with others.

Nevertheless, forced to choose, he is likely to place defending a particular set of identity-based principles second to addressing and solving particular problems. And he is capable of switching to the accommodative style when he feels the need to build consensus and empower others.

Overall, the profile is more compatible with Harper as liberal pragmatist than as neocon ideologue. One caveat: it is not possible to specify the extent to which the traits studied here are context-driven, as opposed to deep-set features of the leader’s personality. In Harper’s case, most of the interviews took place in the context of minority government or the establishment of leadership in a divided party, tasks requiring complex negotiations and balancing demands from different factions. Would Harper’s scores change if his party had either no chance of influencing the government or was in solid control of Parliament? Finally, one cannot help speculating that it is just possible that many of these traits are typical of Canadians generally, so that if the comparison were drawn with only Canadian political leaders, his profile might be quite different. But that is for another day.

Neal Carter is Associate Professor of Political Science at St. Bonaventure University in Olean, NY. The author would like to thank Social Science Automation, Peg Hermann and Azimat Sakiev for their help with Profiler... Read More