When a Conservative-dominated parliamentary committee examining so-called antiterrorism legislation refused to hear Privacy Commissioner Daniel Thouin this winter, it surprised no one. In the memorandum he made public, Thouin warned that government operatives would gain ”the potential to know virtually everything about everyone” as they sought to identify suspected new threats. “The loss of privacy is clearly excessive … All Canadians will be caught in this web,” he wrote.

This was not the kind of message the Harper government wanted to hear, so denying Thouin a public platform made sense to the “boys in short pants,” as the message manipulators in the Prime Minister’s entourage are known. It was yet another assault on the flow of important information under Stephen Harper, nothing less than a campaign to ensure that the message Canadians get matches the values inherent in the legislation the Conservatives adopt.

The antiterrorism legislation, Bill C-51, came too late to be included in recent books assessing Harper’s government, but it fits the pattern of the carefully planned and bluntly imposed measures described in Mark Bourrie’s aptly titled Kill the Messengers. Bourrie’s exhaustively researched exposé documents the Conservatives’ success in silencing the government’s own experts and limiting debate on major issues as they reorient policy in radical new directions.

Some of what Bourrie discusses, including the strict and centralized control of the information flow and the adoption of U.S.-style negative advertising, is included in journalist Michael Harris’s excellent and passionately written Party of One,1 which offers a complete and detailed discussion of the robocalls scandal and the Senator Mike Duffy saga. Bourrie restricted his discussion of Duffy because they were friends and press gallery colleagues in Ottawa. Duffy hired him in 2009 to carry out some research on how to deal with troll posts – online harassment – on the internet. He never expected to be paid, but did cash a cheque from Duffy’s company for the work, Bourrie says.

Nevertheless, Bourrie offers a slightly more restrained yet more analytical approach than Harris’s. Bourrie states that Harper’s feared “hidden agenda” when he first took power has stayed hidden and few outside the Ottawa bubble will have noticed that “to a frightening degree, the prime minister has tried to muzzle and delegitimize criticism.” Writing before C-51 was tabled and debate began, Bourrie denounces Harper’s moves to restrict access to information as “the biggest assault on liberty and democracy since Pierre Trudeau imposed the War Measures Act” in October 1970.

Bourrie posits that the restrictions and systems introduced under Harper are designed “to permanently change the way the country is governed and will keep Canadians very far removed from the government that they supposedly own.” Harper’s “new Canada” is an “energy and resource superpower” rather than a country of factories and businesses, a “warrior nation,” instead of a peacekeeper, an Arctic nation instead of urban clusters along the U.S. border, a country of “self-reliant entrepreneurs” rather than one that shares among its people and regions. To achieve these goals, Bourrie writes, Harper set out along a set of pathways to:

If Harper wins the next election and continues along the same trajectory – “killing the messengers” so only his message is heard – the government and the country “will belong to a clique of political insiders who serve at Stephen Harper’s pleasure, and to their friends in the business world.”

On the government side, muzzling of information is not the result of any shortage of staff. A report by the Canadian Taxpayers Federation last summer, based on an Access to Information request, revealed that the government is spending $263 million for communications staff for the core public service – $48 million more than under the Liberals.

As Bourrie explains, they are part and parcel of an “information” system in which government scientists and all experts are “gagged by strict rules laid down at the centre” – the Prime Minister’s Office. Whereas until 2007 a reporter could just call up a scientist, no one in government now speaks without permission. Conservative politicians and public servants are barred from media interviews unless the PMO approves a “Message Event Proposal.” It lays out the context of the interview, the length and visuals that may be used.

The result, when it comes to government scientists, amounts to a gag. A 2013 survey of 4,000 government scientists, cited in the book, found that only 14 per cent felt they could share a concern about public health and safety or an environmental threat without fear of managerial retaliation or censure. From muzzling scientists, the battleground has shifted to preventing the federal government’s librarians and archivists from visiting classrooms or attending conferences and speaking at public meetings, even on their own time.

Bourrie explains some Canadians’ approval of the Conservative record by noting that Harper seems to offer national pride and strong leadership in a dangerous world, with simple answers to complex questions. “It’s an illusion,” Bourrie warns, as he urges concerned Canadians to vote for a party that will reverse antidemocratic trends, and calls on those concerned to become active in groups and on social media. Above all, he counsels, “Don’t wait for a savior.” 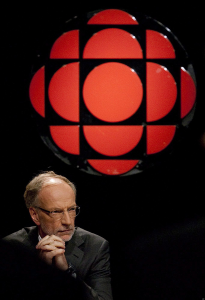 A thriller with no winners

Alain Saulnier learned the hard way about Harper’s war on the messengers when he was fired in 2012 as director of radio and television news at Radio-Canada, the French service of the CBC. He wrote a book about the decline of the CBC and its French-language networks. Ici ÉTAIT Radio-Canada reads like a thriller, except that there are no winners. The victims include Saulnier, who now teaches journalism at Université de Montréal, and other employees who have lost their jobs at Canada’s most important multimedia source for news, information, current affairs and entertainment programming – and, even more so, the Canadian public.

Saulnier begins his narrative by recalling the dark days of Duplessis-era Quebec, when the CBC’s French network did play something of a savior’s role in developing and deepening cultural awareness, shared values and opening to a wider world beyond parish confines. The arrival of French-language television in 1952 offered a positive window for French-Canadian society in Quebec, gave exposure to emerging public personalities in the arts and politics, and propelled the winds of change that led to the defeat of Maurice Duplessis’s Union Nationale, the Liberal victory in June 1960 and the start of the Quiet Revolution.

Saulnier emphasizes that as an employee he was always committed to the principle that the government must maintain an “arm’s-length” relationship with the public broadcaster. But since the CBC is a creature of the federal government, which has ultimate control over its mandate and the bulk of its budget, this is more easily declared than followed. How to cover a burgeoning independence movement in Quebec in the 1960s and 1970s posed a particular challenge. In 1968, the CBC’s mandate was rewritten to include contributing to the development of national unity. In 1991, while Progressive Conservative Marcel Masse was communications minister, this was changed, and the broadcaster was “to contribute to shared national consciousness and identity.”

Prime Minister Trudeau was so upset with coverage of the headline-making separatists that in October 1969, in a speech to Liberal Party members, he threatened to “put a lock on the door” of the French network offices. The arm’s-length distance appeared to narrow following the 1980 referendum on Quebec sovereignty: in 1981 Trudeau’s former press secretary, Pierre O’Neil, was named to the key post of director of news, replacing the much admired Marc Thibault. O’Neil held the job for ten years. Other well-known Liberals followed suit.

Saulnier makes the point that under Prime Minister Jean Chrétien, following the 1995 referendum, CBC and Radio-Canada suffered their worst-ever financial cutback. According to a Friends of Canadian Broadcasting compilation cited in the book, the parliamentary allocation to the CBC was cut to to $1.19 billion in 1998 from $1.64 billion in 1994–95.

The pace of the book picks up shortly after Stephen Harper began his first mandate in 2006 and Saulnier was appointed Radio-Canada’s news chief, determined to promote investigative journalism. He learned that the Conservatives have a different view of “arm’s-length.” Saulnier did not expect Harper to react after he suspended and reassigned then-reporter Christine St-Pierre (now Quebec’s Minister of International Relations) from the Ottawa bureau when she publicly declared her support for continuing Canada’s controversial military role in Afghanistan. Harper blasted the move, saying journalists who support the mission should be allowed to say so. “Patriotism before journalism: it wasn’t my style, but I was discovering that of the Prime Minister,” Saulnier observes.

The next run-in was over coverage of a 2007 speech by then–Natural Resources Minister Gary Lunn, who said nuclear energy could be used in the tar sands extraction process as a less polluting option than natural gas. A furious Sandra Buckler, then Harper’s director of communications, complained and, in a retaliatory move, ordered Conservative MPs to refuse Radio-Canada any interviews for several days. The problem for the PMO, Saulnier suggests, was that the Conservatives did not control the message.

When the network launched a series called L’épreuve des faits (We look at the facts) during the 2008 election, Harper’s abrasive press attaché, Dmitri Soudas, alleged that several of the items were “very critical” of government programs, without being equally critical of the other parties’ responses.

Things got worse at Radio-Canada after the departure of Robert Rabinovitch – a president Saulnier admired – and his replacement by the current office-holder, Hubert Lacroix. One of the most telling anecdotes is a chance meeting between Lacroix and Alain Gravel, Radio-Canada chief investigative reporter with the newsmagazine show Enquête, whose work on widespread corruption in the construction industry led to the appointment of Quebec’s Charbonneau commission of inquiry and its explosive and corrosive testimony. Gravel proudly told Lacroix, “Boss, we have a heck of a show on Enquête tonight.” Lacroix’s deadpan response: “When are you going to come up with some positive investigations?”

Following the 2011 election, when the Conservatives gained a majority while winning a paltry five seats in Quebec, the CBC board – composed according to Saulnier entirely of Conservative Party supporters – summoned him and then–vice-president Sylvain Lafrance to Ottawa to discuss election coverage. Saulnier and Lafrance presented an interim report by an independent third party, Laval University’s Centre d’Études sur les Médias, which compared coverage in other media and among the various Radio-Canada programs and concluded that “there is probably no bias in the attention paid to the various competing parties by Radio-Canada.” Still, he remembers being “cut to pieces” by two Quebec board members and left the meeting feeling the writing was on the wall. Saulnier soon was offered a new job as network ombudsman, which he had previously refused. He preferred to resign.

He ends with concern for the future and the new focus under Harper. In 2010–15, the CBC mission was “to express Canadian culture and enrich the democratic life of this country, we strive to be a socially minded organization in everything we do.” A more restrictive mission for 2015–20 says merely that the CBC “expresses Canadian culture and enriches the life of all Canadians through a wide range of content that informs, enlightens and entertains.”

This book’s short history of Radio-Canada’s role in shaping and recording Quebec history and contributing to its cultural development comes at an important time in the evolution of the network. Saulnier’s personal story is a warning about how far this government is prepared to go to control CBC/Radio-Canada – one of the country’s most successful cultural institutions and, as a reliable provider of balanced news, documentaries and investigative journalism, a pillar of Canadian democracy.

With these two important books, it becomes clear that the Conservative assault on the integrity, autonomy and public funding of CBC/Radio-Canada dovetails with its clampdown on the free flow of information and unprecedented speech controls on scientists and experts. It amounts to Harper silencing the independent voices that may challenge his political vision for Canada.

Irwin Block covered provincial and municipal politics for many years for the Montreal Star and the Montreal Gazette and is now a journalist with the Senior Times in Montreal. Read More