In the following pages we present three extraordinary observations by Canadians abroad. The primary focus is Africa, although Don Cayo’s travels took him to Cambodia and Poland as well as Rwanda.

Robert Cohen tells the most hopeful of the three stories. His expertise in housing has taken him to South Africa, where for five years he has worked in Johannesburg as a consultant with national, provincial and local governments under the auspices of Rooftops Canada, the international development program of Canada’s cooperative and social housing organizations. In that capacity he has been a witness to South Africa’s post-apartheid transformation. He has lived its frustrations and disappointments, but also its achievements, such as the more than two million houses built and given free to the people. Despite its failings, most poignantly the human toll of the government’s inadequate response to the HIV-AIDS pandemic, Cohen remains inspired by the story he tells.

Click to read A Work in Progress by Robert Cohen.

Dave Klassen has lived more than half his life in Africa, including seven years as the Mennonite Central Committee’s country representative in Uganda. While there, he became intimately familiar with the war in northern Uganda, a devastating conflict that has received relatively little attention in the world at large. Klassen is also a talented photographer and filmmaker, and after his return to Canada in 2004 sought to document on film the impact of the war and – even more significantly – the remarkable efforts toward reconciliation that are taking place.

He and his frequent collaborator, journalist Rick Gamble, spent three weeks in Uganda and Sudan in the summer of 2007 interviewing former child soldiers and others affected by the conflict. Some held nothing back in recounting the atrocities they had participated in and witnessed, and their stories are disturbing. At the same time, Klassen and Gamble also documented the determination of many former child soldiers to get past their experiences, create new lives for themselves and restore the fabric of the community. 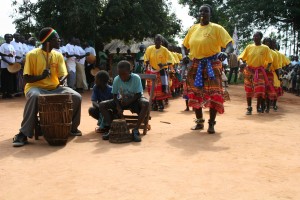 Their film Bending Spears premieres in Waterloo, Ontario, on June 19. Some of the stories that are at the heart of the film are presented here in text and photographs.

Don Cayo is a senior Vancouver Sun columnist. His usual haunt is the paper’s business section where, on any particular day, he may write about Money Mart’s dubious cheque-cashing practices or the implications of municipal tax policies for urban land use. On occasion, he turns up in an entirely different venue. In recent years, he has headed a CIDA/Jack Webster Foundation project to provide short-term fellowships to young British Columbia journalists interested in practising their craft in developing countries. Betsy Trumpener was among them. Inroads published her article on HIV-positive mothers in Malawi, along with Cayo’s on the impact of free education in eastern Africa, in the Summer/Fall 2006 issue.

In 2007, he accompanied the fellowship winners to Cambodia, where he visited Tuol Sleng, the large colonial-era lycée in the heart of Phnom Penh that the Khmer Rouge transformed into a prison for cadres who deviated from the party line, and the Killing Field, where cadres killed and buried their former comrades in mass graves. In early 2008, Cayo and another group of fellows travelled to Rwanda. Outside Kigali, he visited two churches in which Tutsis had sought refuge against machete-wielding Hutus. In Cambodia, a place of learning became a place of torture and death; in Rwanda, places of worship became sites of hysteria and slaughter. En route to Rwanda, he took a side trip to Auschwitz, the iconic monument to European inhumanity in the 20th century. Neither Europeans nor Africans nor Asians are innocent.

Cayo wrote an initial article on these horrors in the Vancouver Sun. We invited him to reflect further on the implications. He came up with more questions than answers – bringing to mind the statement of Raul Hilberg, the great historian of the mechanisms of the Holocaust, that he did not ask the big questions for fear that the answers would be too little.

Indeed, all three of these articles leave us with questions, and we owe their authors a debt of gratitude for raising them.