A response to Luc Allaire from John Richards

While Inroads is delighted to publish Luc Allaire’s case for Quebec’s universal childcare program, there are doubts about the program that should be aired. As Inroads co-publisher, I take the liberty of airing them.

To summarize Allaire’s case in his own words: “Parents appreciate both for the good educational environment they provide for their children and for their affordability, and their existence has made it easier for a large number of mothers of young children return to work.”

The cost of this program to the provincial government is high: about $2 billion annually, $9,000 per subsidized space. Fees paid by parents (initially $5 and now $7 per child per day) cover the remaining costs of about $400 million annually.

Quebec introduced its universal childcare program in 1997. Both before and after 1997 – in Quebec and the rest of Canada – the provinces and Ottawa have provided extensive childcare subsidies to low-income families. Quebec’s universal program is primarily of benefit to families that are not poor.

Among families with children “at risk” of perpetuating an intergenerational cycle of poverty, there is a strong case for fiscal incentives to induce the parents to engage in employment and not rely on welfare. The most important “at risk” group is single-parent families. By increasing the probability that children complete secondary studies and avoid teenage pregnancy, the role model of a working parent provides a benefit that more than offsets the cost of reduced parenting time.

Across Canada, social policy over the last 15 years has combined “tough love” reforms intended to reduce reliance on welfare and “soft love” reforms to increase nonwelfare income for low-income families, subsidize childcare costs and increase in-work benefits of low-wage jobs via earnings supplements. And the evidence from “head start” childcare programs in the United States demonstrates conclusively that children of “at risk” families achieve better outcomes in early primary grades if they participate in childcare programs of reasonable quality. (Early childcare education is not a panacea: without additional interventions, the educational benefits tend to fade in higher grades.)

Among middle-class two-parent families, it is not clear that the government should induce parents of young children – via a subsidy of $9,000 per childcare space in this case – to enter the labour force and rely on paid childcare. In making the choice between “stay at home” parenting and reliance on childcare, parents should be assessing the benefits (monetary and psychological) from participation in the labour force against the costs (which include childcare). Provided childcare costs can be deducted from taxable income – which is the case in Canada – the personal income tax does not distort this decision.

Whether or not it is desirable to do so, Quebec’s universal childcare program has undeniably increased labour force participation among parents of young children. In the years before introduction of the program, labour force participation among Quebec mothers of children aged one to four was well below the comparable statistic in the rest of Canada. A decade later, in 2006, the Quebec rate was well above the Canadian average.1

The basic conclusion to draw from all this is that over the last generation a social transformation has taken place across Canada – and other wealthy industrial countries – as women have opted to combine family and work outside the home. In a modest way, Quebec’s universal childcare program has contributed to its convergence to the female employment rate in the rest of Canada.

What about the “good educational environment”?

Every two years since 1994, Statistics Canada has organized large random surveys of young children (age five and under) living across Canada. These surveys have made possible several rigorous analyses of the impact of Quebec’s universal childcare program – comparing Quebec children pre- and post-1997, and comparing Quebec children relative to children living in the nine other provinces.

Thus, it is these surveys that provide the evidence that labour force participation among Quebec mothers of young children has surpassed that of mothers of young children in the rest of Canada. The surveys also provide evidence on children’s psychological development and preschool cognitive learning. (Since the surveys have not followed children into ages above five, they do not provide evidence on school performance.) After adjusting for a series of socioeconomic characteristics of the children’s families, the studies reveal no evidence that children in Quebec have improved their average score on the developmental measures available. In fact, there is evidence that after 1997 the cognitive achievement of five-year-old children in Quebec declined slightly, while that of children in the rest of Canada increased slightly.2

Christa Japel, Richard Tremblay and Sylvana Côté strongly favour Quebec’s universal program but argue that the quality of centres is not good enough.3 Perhaps if Quebec spent $3 billion as opposed to $2 billion annually on this program, there would be evidence of improved psychological and cognitive development. But …

Were Quebec Alberta, with no provincial debt and low tax levels, concern about spending $3 billion annually on universal childcare would matter less. But Quebec is not Alberta. Quebec has high debt and imposes high taxes. Rather than expand this program’s budget, perhaps the Quebec government should do the opposite: scale back the subsidy and consider other options that probably do yield cognitive benefits for young children – options such as childcare targeted to Aboriginal communities and age-four kindergarten. 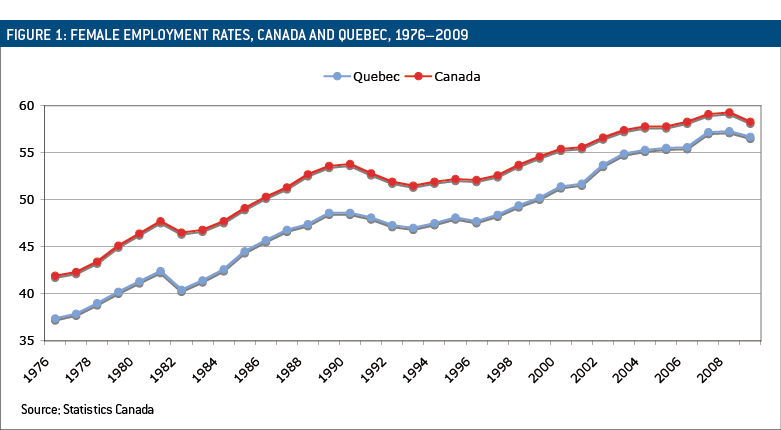