There is less poverty and less inequality in Quebec

In the Winter/Spring 2009 issue of Inroads, I reported that Quebec and Ontario are just about on a par in standard of living. Quebec’s real income per capita is 92 per cent of Ontario’s. But Quebecers enjoy more free time, much of it by free choice: they work fewer hours per week, fewer weeks per year and fewer years in their careers. Incorporating the value of the increased leisure time together with cash income into an overall estimate of “true” standard of living leads to one basic conclusion: the average standard of living is now about the same in Quebec as in Ontario.

This result comes with a second surprise: among regions of Canada, Quebec is a leader in the fight against poverty and inequality. In this article, I elaborate on this fact and suggest a few explanations.

Poverty and inequality are not the same thing. Poverty refers to the lack of resources of people who live at or near the bottom of the income scale. The poverty rate is the percentage of the population living below some low-income threshold. A popular choice of threshold is a disposable income level equal to, say, 50 per cent of median disposable household income. The resulting measure of poverty is a relative poverty rate. Whether a household is poor or not is determined by how large its income is relative to the median.

An alternative choice of threshold is a disposable income level equal to the cost of a fixed basket of goods and services thought to be necessary to sustain some minimum standard of living. This time, the poverty threshold does not move up or down with median income, but simply tracks the cost of the fixed minimum basket. Most people would consider a below-the-line income as indicative of absolute poverty. Both relative and absolute poverty rates are useful, depending on exactly what concern is being addressed. In industrial countries, measured poverty rates usually range from 5 to 20 per cent of total population.

Income inequality, on the other hand, refers to how unequally income is distributed among members of society above as well as below the median. A standard measure of income inequality is a decimal called the Gini coefficient. For disposable household income, this takes on values that usually range from 0.20 (very little inequality) to 0.50 (very pronounced inequality). Even though inequality and poverty are different concepts, it is nevertheless true that countries where inequality is greater also usually have greater poverty. 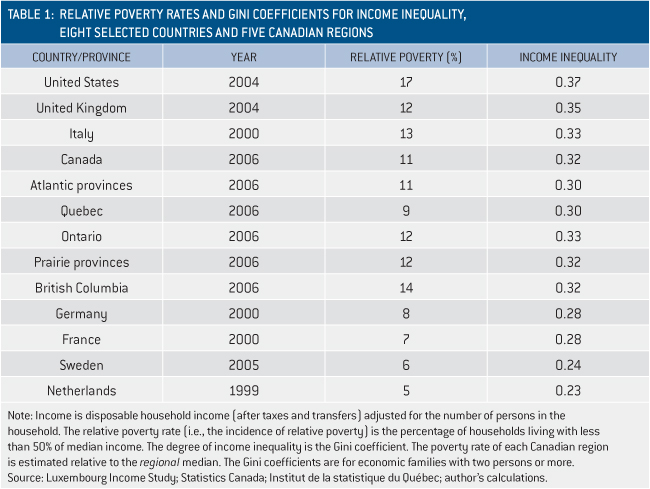 Table 1 compares the statistics on relative poverty and income inequality produced by the Luxembourg Income Study (LIS) for eight selected countries. (No comparisons of absolute poverty between countries are available.) Provincial data for five Canadian regions are added to the list. The highest poverty rates and Gini coefficients for inequality are found in Anglo-Saxon countries, with the United States in the lead. Measures of relative poverty and inequality in southern European countries such as Italy are similar to the Anglo-Saxon figures. The lowest poverty rates and Gini coefficients worldwide are found in western Europe and Scandinavia.

Internationally, Canada ranks in the middle. Table 1 shows that the country as a whole does better than the United States, Britain and Italy, but worse than France, Germany, Sweden and the Netherlands. Perhaps more surprisingly, it also reveals that, within Canada, Quebec has a better record on relative poverty and income inequality than any other region. It is this result that I will now discuss. I will first focus on poverty – relative and absolute – and then on broader income inequality.

The level of government transfers could be expected to decline as market income increases. This is not the case here: average transfers (net of taxes) were the same in Quebec as in Atlantic Canada ($7,500) in 2006 even though average market income was $1,100 higher in Quebec. Given that the same federal transfer programs apply in every region, this can be taken as evidence that provincial transfers do make a difference in Quebec.

And they do. There have been important developments in Quebec social policy since the mid-1990s: the continued expansion of social spending, universal drug insurance, low-cost public daycare, increased provincial family allowances, the addition of a working income tax credit on top of the federal program and the decision to stabilize the minimum wage at around 45 per cent of the provincial average hourly wage all come to mind. Some of these measures have benefited all families, but they have had a larger favourable impact on low-income families. To underline the importance of fighting poverty, the National Assembly unanimously adopted an Act to Combat Poverty and Social Exclusion in 2002.

Turning to the question of income inequality, Figure 2 gives the broad picture by tracing the Quebec/Canada comparison of Gini coefficients for disposable household income back to 1987.3 Three observations can be made. First, income inequality has been less in Quebec than in the country as a whole for at least two decades. Second, in the second half of the 1990s inequality increased everywhere in Canada, including Quebec, before stabilizing at a higher level in the 2000s. Third, this increase has been more moderate in Quebec than in any other region, so that the difference in inequality between Quebec and the rest of the country is now wider than ever.

It is also worth noting that before-tax earnings inequality by quintile is less pronounced in Quebec than in the rest of the country. This conclusion can be drawn directly from Figure 3 (on page 64). Quebecers in the first earnings quintile earn more, and those in the second and higher quintiles earn less, than other Canadians. Moreover, and crucially, the higher the position you occupy in the Quebec wage hierarchy, the more your earnings fall short of the earnings of Canadians of similar ranking in other regions. The reasons for this are not yet clear. What we know is that for many years the provincial policy environment in Quebec has been supportive of low-wage earners through the minimum wage and other labour standards, pro-union legislation, public sector wage agreements, social transfers, etc. But noneconomic factors such as the particular way in which a climate of trust and fairness is established in business and government organizations could also be at play.

The sudden persistent increase in family market income inequality in the early 1990s and the decline in the equalizing impact of the tax-and-transfer system since then – throughout Canada – have been the subject of intense research in recent years. Several causal factors have been singled out, such as the growing gap between the top and the middle of market income distribution, changes in family life and cuts in taxes on higher incomes and in social assistance.5 The fact that the increase in disposable income inequality has been more moderate in Quebec certainly owes something to the fact that top earnings have not been as exuberant as elsewhere, and that provincial income taxes and social spending have not declined by as much.

My main purpose in this short essay has been to establish the fact that, among Canadian regions, Quebec is a leader in the fight against poverty and inequality. I also wanted to make clear that the province has not achieved this position by chance. Over the last few decades, it has shown consistency and persistence in this endeavour by adopting a sequence of determined and purposeful laws and measures, including the 2002 Act to Combat Poverty and Social Exclusion. Quebec, in other words, has passed the stage of yes we can and can claim that yes it works.

Furthermore, the Quebec experience demonstrates that fighting poverty and inequality can be effective and successful without impairing the growth and employment creation process. It offers another counterexample – a North American one – to Arthur Okun’s pessimistic assertion that there is an insuperable tradeoff between “equality and efficiency.”6 It is all the opposite: in the long run, a less unequal society will by definition allow more of its members to enjoy prosperity and freedom and will not be cursed by widespread envy.

1 Based on a broader indicator defined as the product of incidence and depth, absolute poverty is unambiguously lower in Quebec than in any other province or region.

2 In fact, given that the cost of living was about 7 per cent lower in the province than in Canada as a whole, the purchasing power of this disposable income in Quebec was 9 per cent higher than the national average. See Statistics Canada, The Consumer Price Index, Cat. No. 62-001, Table 15.

3 In contrast to Table 1, the inequality coefficients in Figure 2 are for all economic families, which include unattached individuals as well as families with two persons or more.

5 For a summary and further references, see John Myles, “Precarious Families, New Inequalities and the Welfare State: Are There Alternatives to Robin Hood?”, John Curtis Memorial Lecture, Annual Meetings of the Canadian Sociological Society, Vancouver, 2008. A revised version of this lecture can be found on pp. 66–73 of this issue of Inroads.