With its Liberal bandwagon and organized strategic voting, this was an election like few others. Among other things it gave the Liberals the first-past the-post winner’s bonus, which brought them a majority of seats, even in Quebec. Some newly elected Liberal MPs who had been encouraging NDP supporters to help elect a minority Liberal government were apologetic: “I was expecting a minority government.” A vast number of voters were left frustrated at having to vote against something on October 19, saying, “Never again – next time I want to vote for my first choice.”A voter’s anguished letter to Justin Trudeau went viral: “I did not vote for you. I voted against the alternative … Change the electoral system.”

Never again should we face a one-party, one-man government elected by a minority of voters. We urge you to work with all Parties and enact voting rules for a true and modern representative democracy in time for the next election …We are calling on you to design a voting system for Canada in which every ballot delivers equal representation.

Specifically, the Liberal platform promised to study electoral reform, including both proportional representation and preferential ballots in single-member districts, and implement one of these options in time for the next election. Preferential ballots, not coincidentally, help centrist parties, which hope to be everyone else’s second choice. In 2013, Stéphane Dion noted that “preferential voting … does nothing to correct the distortion between votes and seats and the under-representation of national parties compared to regional ones.”

Hopefully, few in the Liberal Party expect such a partisan quick fix to be acceptable. As Dennis Pilon showed in the last issue of Inroads, only proportional representation will make every vote count.1

The 2015 election under proportional representation: A simulation

It is tempting to speculate about the impact proportional representation would have had on voters’ decisions, but that is wishful thinking. We do know that changing electoral systems changes the incentives that affect the kinds of decisions that voters (and parties) make. Hence, not insignificant number of voters would have voted differently under PR, but we cannot know just how. What we can do – as a starting point to demonstrate how PR in Canada would work – is look at what the votes cast on October 19 would have produced under a proportional voting system.

Note that no one is proposing a classic “list-PR” system, where all legislators are chosen from party lists. The consensus of supporters of PR in Canada is in favour of a Mixed Member Proportional (MMP) system like in the ones used in Germany, New Zealand and Scotland. Here I’ve used the MMP model designed by the Law Commission of Canada (see box), which was supported by the NDP and Green MPs and half the Liberal caucus in a vote in the House of Commons on December 3, 2014.

It was also supported by former Conservative Brent Rathgeber, then sitting as an independent. Rathgeber was persuaded by the fact that, with two votes, you can vote both for the party you want in government and for the local candidate you like best regardless of party. You don’t have to worry about hurting your party, since it’s the second (regional) ballot that determines the party makeup of the legislature. (In New Zealand, about 32 per cent of voters split their ballots in this way.) MPs can thus win support from constituents of all political stripes on the basis of their efforts in the riding, support they bring with them into the House of Commons, enabling them to act more independently.

The Law Commission’s 2004 report Voting Counts: Electoral Reform for Canada recommended, “Within the context of a mixed member proportional system, Parliament should adopt a flexible list system that provides voters with the option of either endorsing the party ‘slate’ or ‘ticket,’ or of indicating a preference for a candidate within the list.”2

Similarly, Fair Vote Canada’s 2015 campaign supported only models which respected the need for all MPs to face the voters. And leading Liberal MP Dominic Leblanc told Fair Vote Canada, “I support reforms to add elements of proportional representation that also ensure that Members of Parliament remain directly accountable to their constituents first and foremost.”

Such regions have an effective threshold of at least 5 per cent. The 2015 Green vote dropped to only 3.5 per cent across Canada, while in 2008 it was 6.8 per cent. So no regional PR model would have given most 2015 Green voters full representation. Still, a 5 per cent threshold would have given them four MPs, all from their British Columbia base. We can be confident that without the need for strategic “anybody but Harper” votes, the Greens would have topped 5 per cent in many other regions, gaining official party status and overtaking the Bloc Québécois.

Any PR model for Canada will start by looking at votes province by province, since the Constitution gives each province specified numbers of MPs. As we can see in table 1, perfect provincewide proportionality would have resulted in 137 Liberal MPs, 109 Conservatives, 67 New Democrats, 10 Greens, and 15 Bloc Quebecois MPs. That’s assuming a threshold no higher than the 2 per cent used by Jean Chrétien for his great campaign finance legacy, the per-vote subsidy. 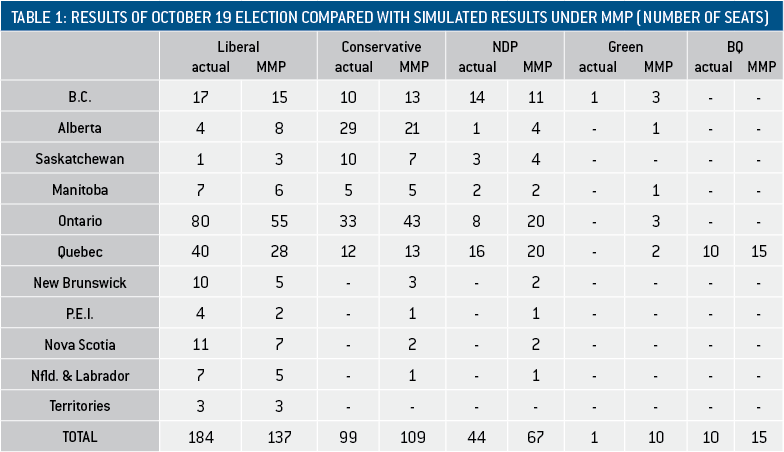 In Alberta, the 25 per cent of the voters who voted Liberal deserved to elect eight of the province’s 34 MPs, yet elected only four, all men. A proportional system would have let voters in Alberta elect eight Liberal MPs, 21 Conservative MPs, four NDP MPs and one Green.

Moreover, the preferential ballot, suggested by Justin Trudeau and other senior Liberals, would not have helped the Liberal Party in the west. Only two ridings in Saskatchewan elected Conservative MPs by less than 50 per cent of the vote, and the NDP was second in both. In Alberta as well, I see no riding where the preferential ballot would have helped Liberals. In central Canada, it would likely have padded the Liberal majority.

Turning to Ontario, once we consider regions, we can see how electoral reform will improve representation. In the 15 ridings of west central Ontario, Liberal voters cast 42 per cent of the ballots, while Conservative voters cast 41 per cent. Yet the region’s 15 MPs are ten Conservatives and only five Liberals. In the 11 ridings of southwestern Ontario, NDP voters elected four MPs with 27 per cent of the vote, yet the 33 per cent who voted Liberal elected only two MPs.

Another advantage of the system is that highly popular and effective MPs are likely to be elected under MMP even when their party’s candidate does not come from first in the district they have represented. For the NDP, this could include Megan Leslie, Peter Stoffer, Jack Harris, Françoise Boivin, Nycole Turmel, Paul Dewar, Craig Scott, Peggy Nash and Jinny Sims.

It is true that a regional MMP model risks local sweeps creating “overhangs.” Those are results too disproportionate for the compensatory (“top-up”) MPs to correct. That’s the tradeoff in the system design, to keep local ridings from being almost double their present size. Overhangs would have happened on October 19 with the never-before-seen Liberal sweep of New Brunswick and with the sweep of Toronto. If we simulate the 2015 votes cast with regions averaging only 12 MPs, this results in a bonus of three MPs for the Liberals.

Taking this into account as well as the failure of the Greens to meet the effective threshold almost everywhere east of B.C., the final count in my regional simulation changes marginally to Liberals 143, Conservatives 105, New Democrats 69, Bloc 15, and Greens six. But we need to keep in mind that with a real MMP election where voters do not need to cast strategic votes, the result will be even more proportional.

In conclusion, apart from assuring fair overall representation, an appropriate form of PR would allow every Canadian to cast a straightforward vote in favour of his or her preferred candidate and party – something many voters in 2015 were unable to do. 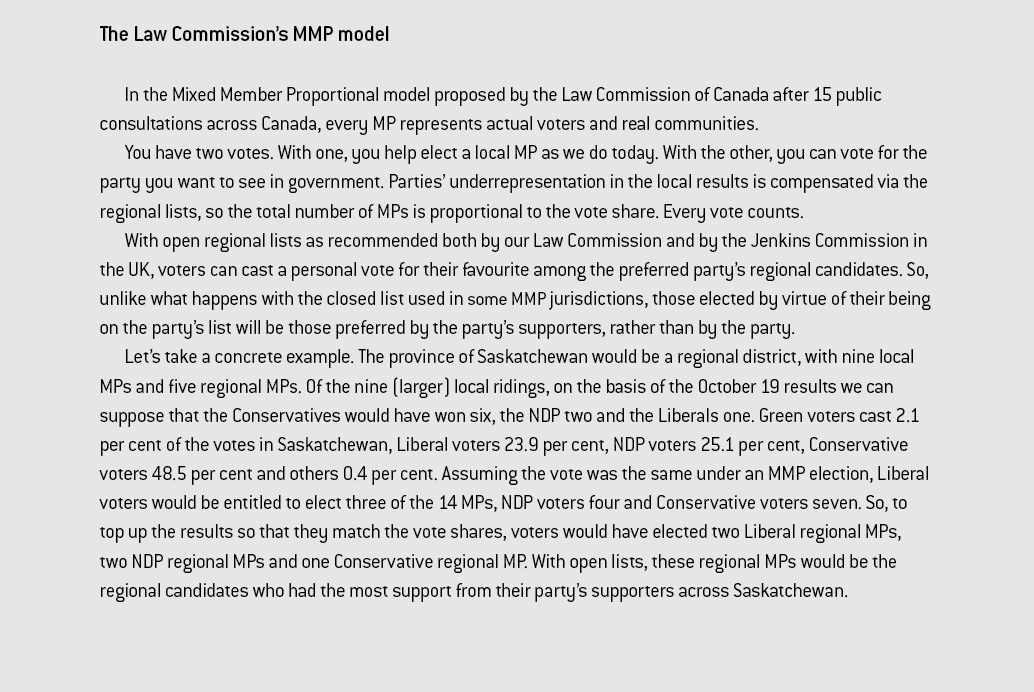 Wilf Day is a lawyer in Port Hope, Ontario, and Secretary of the National Council of Fair Vote Canada. The views expressed in this article are his own and not those of Fair Vote... Read More