When Thomas Piketty’s Capital in the 21st Century appeared in 2014, it became a publishing sensation. Its key argument was that capital had been growing at a far higher rate than other factors of production in Western societies in recent centuries, with the singular exception of the period between 1914 and the 1960s when labour was successful in securing a more equitable share of economic wealth. The book, a densely packed study of over 600 pages, replete with tables and well-honed literary references, caught the attention of the mainstream media and financial press and went on to become an international best-seller – quite exceptional for a serious work in economics.

Since then, Piketty has not been sitting on his laurels. As a professor in the Paris School of Economics, he has helped form a whole generation of graduate students working on issues of equality, inequality and social justice. He has also been a frequent intervenor in public debates within France and the European Union. And in 2020 he released a new volume entitled Capital and Ideology – this one exceeding 1,000 pages, footnotes included.

While his latest book has not received the lavish attention showered on his first, it is no less worthy of attention. For it extends his analysis of the rise of capitalism and of some of its contradictions and limitations by working on a broader canvas than before.

He goes back to the Middle Ages in his discussion of a trifunctional order of society based on the nobility, the clergy and a third estate. He then goes on to map the emergence of a proprietarian order in Europe and in much of the world which it came to colonize. What is new is the key place he now gives to ideology, no less than capital, in coming to terms with the broad sweep of historical development.
In comparison with his 2014 book, his geographical horizons have broadened too, as he embraces Russia, India and Japan and pays attention to Africa and Latin America, thus engaging in a version of global economic history. In doing so, he was clearly aided by an army of research assistants, his own graduate students, a full hundred of whom are acknowledged in the preface to the book. The scope of many of the chapters reminds me of the great French economic historian of a previous generation, Fernand Braudel, and his multitome study of Civilization and Capitalism. 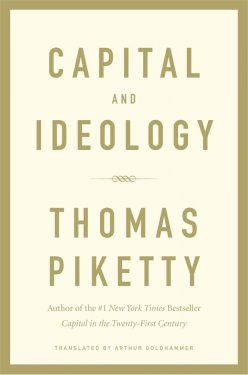 However, it is Piketty’s analysis of recent developments that is likely of most interest to readers of Inroads. He examines the course of social democracy but emphasizes its ultimate failure, despite important contributions to improved social welfare, to address structural problems of inequality. He is sharply critical of Communist societies for their political as well as economic failures, which in turn help explain the revival of nationalism in the post-Communist societies of eastern Europe. And he sees the current phase of globalization as one of hypercapitalism, with the financial wing of capitalism in the ascendant.

Among his most pertinent observations is his analysis of the conflict between what he calls the “Brahmin left” and the “merchant right” – that is, between the highly educated, urban-based professionals and middle class of first-world societies and the plutocratic element in capitalist society. The Brahmin left has paid much less attention to the concerns of the lower 50 per cent of society than an earlier left. Identity politics has come to displace a more class-based politics. Combined with disparities based on unequal access to education, the upshot has been large sections of the traditional working class gravitating to the populist politics of the right. Voting patterns in recent elections have largely reflected this.

Piketty maintains that we should be thinking about economic, fiscal and political initiatives to help create a just society. This leads him, in perhaps the most arresting chapter in the book, to propose what he calls a participatory socialism. He calls for a progressive wealth tax, a Capital Endowment Fund for the young, increased power sharing within firms, a progressive inheritance tax, progressive taxation of carbon emissions and increased allocations for the least advantaged primary and secondary schools.

Given the strongly market-infused era in which we live – and this despite the depredations and rethinking of priorities that COVID-19 has entailed – Piketty’s proposals would strike many as dreaming in Technicolor. They are certainly not about to be introduced holus-bolus into society as we know it. Yet one is struck by survey after survey of young people in Western societies who are disillusioned with capitalism. The cost of housing is prohibitive for many living in major urban agglomerations. Dead-end jobs that can follow years of higher education don’t help. The climate crisis bearing down with ever greater severity leaves little room for rose-tinged illusions.
Piketty may not be where the zeitgeist seems centred at the moment. But 25 or 50 years from now, he may turn out to have been a true prophet of the failures of hypercapitalism.