Years ago – maybe 40 years ago – I attended an all-candidates meeting for the leadership of the federal New Democratic Party. I happened to be sitting next to a visiting Swede and after the debate I asked his reaction. As I remember, he was surprised at how “middle-class” the party was. I asked him to elaborate. He said the party seemed geared toward the middle class and not toward the poor.

That story has come to mind several times recently – as I was writing a column for the Winter/Spring 2015 issue of Inroads (“The left’s greatest gift to the political right”); as I’ve watched the militant and growing support for Donald Trump; during the celebration of Rob Ford’s life and mayoralty; as I witness Thomas Mulcair’s fall and the Leap Manifesto’s rise; and as I read the following in Paul Krugman’s generally positive assessment of Barack Obama’s presidency: “There are still some areas of disappointment – low labor force participation, weak wage growth.”1

Low labour force participation likely hits the same people most affected by weak wage growth: the bottom third of income earners, people who have given up looking for work and people who are working harder and longer for less money.

These are the people who make up a good part of Trump’s base of support. They also made up a good part of Rob Ford’s base. They seem particularly resentful of (1) refugees and immigrants, (2) people on welfare and (3) public sector employees. They see the left (in Canada) and liberals (in the United States) as overly sympathetic to those groups, and therefore they support the right.

Here’s a third-hand story. An American woman goes into a shop that sells devices for people with disabilities. There’s a basic wheelchair, which is free to people on social security, and a fancy wheelchair which is not. And she says, “This is how the poor get ripped off by government crooks. That’s why I’m voting for Trump.”

It’s pretty clear that she’s misinformed. A right-wing party is more likely to cut funding even for the basic wheelchair, and a left-wing party – despite its support for refugees, welfare recipients and public servants – is more likely to add coverage for the fancy wheelchair. The poor, in general, are likely to get better treatment from the left. In Canada, the NDP has led in raising minimum wages; in Saskatchewan, it brought in Canada’s first income support for low-wage workers.

So why aren’t the poor loyal to the left? Why do they seem increasingly to support right-wing populists like Ford and Trump? Perhaps they actually yearn for the freedom from oppressive government programs that neoconservatives and libertarians promise, but not likely.

Here’s a typical headline from the NDP website: “Tom Mulcair will invest in the middle class by asking corporations to pay their fair share.”2 The poor could be forgiven for not knowing that for the NDP “middle class” includes the poor because it’s a euphemism for “everyone except the very rich.” If they read the fine print, they’ll learn that the NDP promises low-cost child care and a national drug plan. But they might be forgiven for thinking these are just more goodies for the latte-drinking elites.

It doesn’t help that the left has largely shifted its focus from class to identity politics: from the poor and relatively poor to women’s and LGBT issues, people of colour and Aboriginals. The poor – especially poor white males, of course – will see this as another indication that society and elites have turned against them. They see themselves as outsiders and give their support to outsiders. And if latte drinkers are appalled by the Fords and Trumps, that’s just more evidence that outsiders have made the right choice.

Representing the poor and integrating them into society – through decent housing, transit, health care, income support, drug and alcohol treatment, care for the aged and especially education and work that is secure, healthy and fairly remunerated – is more than the ethical thing to do. We should now understand that if we fail, they will support Rob Ford or Donald Trump – or worse. 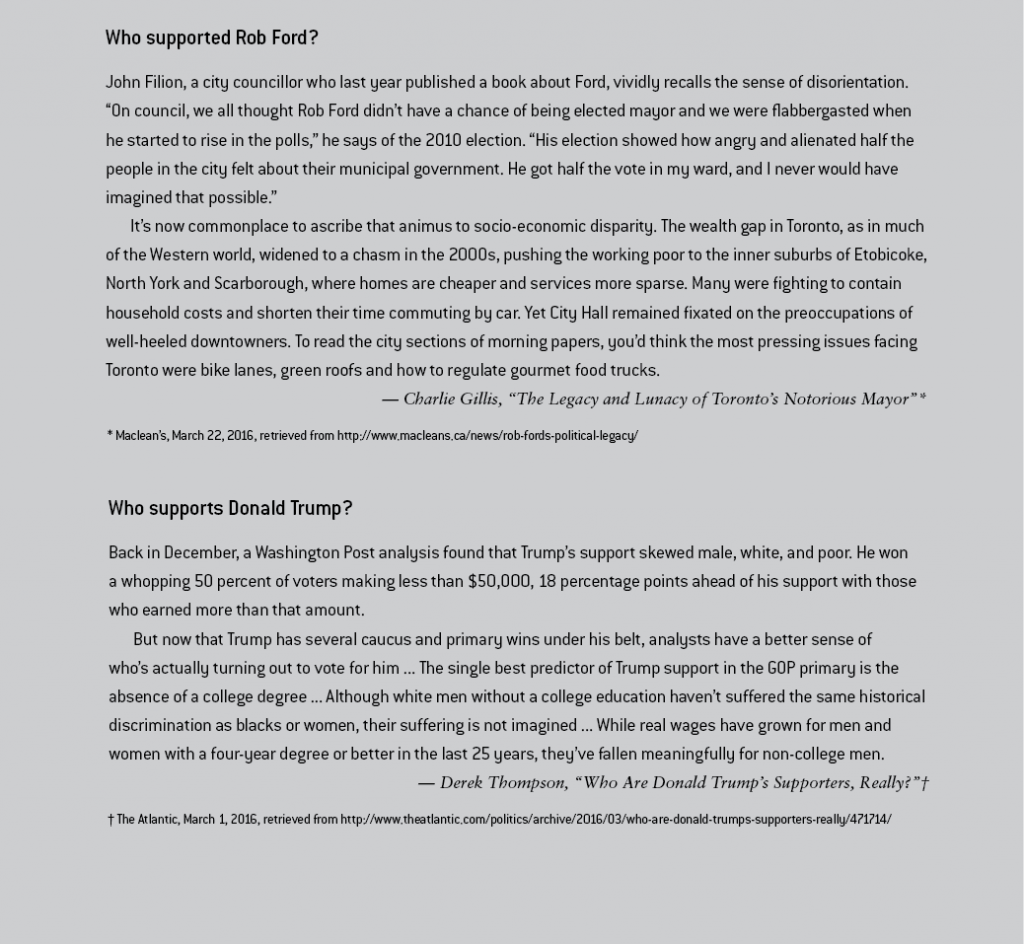