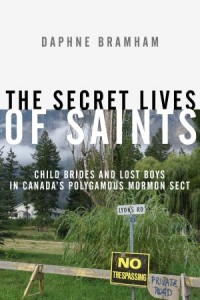 This article inaugurates a new social affairs column by Daphne Bramham, columnist for the Vancouver Sun and author of The Secret Lives of Saints: Child Brides and Lost Boys in Canada’s Polygamous Mormon Sect.

Polygamy has been illegal in Canada since 1890. It was criminalized soon after Charles O. Card, a fugitive escaping prosecution in Utah for having more than one wife, settled in Alberta.

Card and several senior members of the Church of Jesus Christ of Latter-day Saints went to Ottawa to ask Sir John A. Macdonald to allow them to practise polygamy. The Prime Minister said no. Parliament approved the anti-polygamy law the same year that Utah outlawed plural marriage in both its constitution and law and the Mormon Church issued its manifesto suspending the earthly practice of polygamy and warning members that they would be excommunicated if they entered into celestial or plural marriages.

In the intervening years, polygamy has rarely been prosecuted in either Canada or the United States. But since the 1990s, a breakaway sect of polygamous Mormons in British Columbia has acted with impunity. The reason? The B.C. government received a couple of legal opinions in the late 1980s saying that the anti-polygamy law is contrary to the guarantee of religious freedom in the Charter of Rights and Freedoms. Opinions in hand, NDP Attorney-General Colin Gabelmann, who had no legal training, rejected the RCMP’s recommendation to prosecute two leaders of the fundamentalist Mormon community in Bountiful.

Since 1990, Bountiful has tripled in size to 1,200 or more people. There are nearly 500 children in the two government-funded independent schools, which only go up to Grade 10. Winston Blackmore, the community’s bishop, has framed a copy of the Charter and hung it in his office. By his own admission, he has also consummated “celestial marriages” with “several very young girls.” In league with American fundamentalist Mormons, Blackmore has participated in the forced marriages of dozens of underaged girls. He is also complicit in the trafficking of young girls and women between Canada and the United States into what one author called “God’s brothel.” Now 51, Blackmore has had 26 wives and, by last count, has 116 children.

The United Nations Human Rights Committee has repeatedly said that polygamy is “incompatible with equality of treatment with regard to the right to marry.” To make the skewed arithmetic of polygamy work, women and children must be chattels. As a result, men – usually in God’s name – trample the freedoms of everyone who has the misfortune to fall under their power.

Fundamentalist Mormons in Bountiful (as well as those in the Texas compound raided in April by child protection authorities) are taught that boys are to treat girls as snakes. They’re disciplined if they do something as innocent as flirt with girls their own age, watch videos or listen to rock music. Some are excommunicated and told to leave the community at ages as young as 12 and 13. Their mothers are told to tear up or burn photos of them. But the boys are useful for something. It is on the backs of their labour that the leaders support their multiple wives and dozens of children. The patriarchs send the boys to work at companies they control, either as unpaid labourers or for little more than slave wages.

Men who run afoul of Warren Jeffs, the prophet of the Fundamentalist Church of Jesus Christ of Latter Day Saints, are excommunicated. For their part, women and girls are told that their highest and best use is to produce children. Most expect to have eight, ten or more. Birth control is not allowed. They are taught to be subservient to the prophet, their fathers, their husbands and sometimes even their sons. “Keep sweet” and “perfect obedience leads to perfect faith” are two mantras they are encouraged to repeat.

It is a rare polygamous family where all of the wives and mothers are treated equally. As a result, plural wives must constantly compete for affection, attention and money with other women and the children. If a woman’s children are sickly or if she collapses under the strain of too many pregnancies, too many children or too many sister-wives, it is her fault. She is told she is rebellious and out of harmony with God, the prophet and her husband.

Canada’s polygamous community flourishes because B.C. politicians have been led to believe the Charter will stymie them. They look south to the United States where an estimated 38,000 fundamentalist Mormons practise polygamy with near-impunity as well. But this is Canada where – unlike the United States – the constitution guarantees equality as well as freedom of religion.

The Supreme Court of Canada has been very clear that freedom of religion is not an unfettered right. In a landmark decision in 1985, Mr. Justice Brian Dickson wrote, “Freedom can primarily be characterized by the absence of coercion or constraint. If a person is compelled by the state or the will of another to a course of action or inaction, which he would not otherwise have chosen, he is not acting of his own volition and he cannot be said to be truly free. One of the major purposes of the Charter is to protect, within reason, from compulsion or restraint.”

Dickson defined coercion not only as blatant forms such as direct commands: “Coercion includes indirect forms of control which determine or limit alternative courses of conduct available to others … Freedom means that subject to such limitations as are necessary to protect public safety, order, health, or morals or the fundamental rights and freedoms of others, no one is to be forced to act in a way contrary to his own beliefs or conscience.”

All of which suggests that, even in 1990, the B.C. government had a fighting chance of convincing the courts that polygamy is not protected by the Charter’s provisions for religious freedom. Yet even though the federal Justice Minister of the day – Kim Campbell, another British Columbian – believed that the law was constitutional and offered to share the cost of taking a case all the way to the Supreme Court, the B.C. government dropped it like a hot potato. There was no tsunami of public opinion against the polygamists.

But the courts have continued to clarify the limits to religious practice (as opposed to belief). In 2005, the Supreme Court of Canada legalized so-called swingers’ clubs on the basis of the right of consenting adults to do what they wanted if there is no harm to others. In a dissenting opinion, two justices, Michel Bastarache and Louis LeBel, had this to say about harm:

According to contemporary Canadian social morality, acts such as child pornography, incest, polygamy and bestiality are unacceptable regardless of whether or not they cause social harm. The community considers these acts to be harmful in themselves. Parliament enforces this social morality by enacting statutory norms in legislation such as the Criminal Code.

In short, they said that in most cases evidence must be heard to establish harm. But some acts are unacceptable by their very nature because they lead to “societal dysfunction or to the creation of a predisposition to anti-social conduct.” Polygamy, they said, is one of those.

The federal government, supported by the Federal Court and the Federal Court of Appeal, has aggressively upheld the anti-polygamy law by denying Muslim polygamists’ immigration applications. It has also instituted a policy of granting refugee status to foreign women fleeing polygamy and forced marriages.

What it has failed to do up until recently is apply the same standards to the fair-skinned fundamentalist Mormons. Until recently, fundamentalist Mormon plural wives who entered the country illegally have been allowed to stay on “humanitarian and compassionate grounds,” which they applied for only after they had six, seven, eight or more children.

Though it has accepted as refugees women fleeing forced and polygamous marriages in Africa, the Canadian government has never extended a helping hand to either Canadian- or American-born fundamentalist Mormons escaping the same treatment. There is no money to help them in relocating. No money for legal aid to secure the custody of their children. No money to upgrade their woefully poor education. There is no money for counselling, for them or their children, to overcome the years of emotional and mental abuse or brainwashing. No safe houses. No transition houses capable of handling a woman with eight or more children.

In British Columbia, the government has had no qualms about testing the religious freedoms of Jehovah’s Witnesses. In the spring of 2005, the Ministry of Children and Family Development got a court order forcing a 14-year-old Jehovah’s Witness to have a blood transfusion deemed necessary to treat her life-threatening cancer. It did it again in 2007 to force transfusions on sextuplets born to Jehovah’s Witnesses. B.C. Supreme Court Justice Mary Boyd ruled that people can’t be denied their right to hold their beliefs, but religious beliefs cannot override a person’s Charter-guaranteed right to life and security of person: “The preservation of the life of a child … is foremost. All children are entitled to be protected from abuse and harm.” Except, it seems, if those children live in Bountiful.

The federal government has commissioned a series of studies on polygamy over the last couple of years. All but one has concluded that polygamy should remain a criminal offence and be prosecuted. In its Separate and Unequal: The Women and Children of Polygamy, the Alberta Civil Liberties Association described Bountiful as

an authoritarian, theocratic culture where many individual rights are so limited that they have little or no meaning when measured against the bundle of rights and liberties that other Canadians enjoy … Polygamy as practised in Bountiful is harmful to children, women and society because it perpetuates a value system premised on the idea that women have no place in a community as fully equal citizens.

In late 2006, Canada’s justice department released a study written by Rebecca Cook, faculty chair in international human rights and co-director of the University of Toronto’s international reproductive and sexual health law program. She concluded that polygamy offends the dignity of all women and denies their protection and the protection of their children. It undermines women’s and children’s rights to be safe and secure as well as their ability to exercise their full rights and privileges as citizens of this country.

She also warned that the failure to prosecute polygamy not only was contrary to the constitution and Charter but also contravenes the Universal Declaration of Human Rights – written by a Canadian and ratified by Canada in 1948. That’s not all. Failing to prosecute, she concluded, contravenes other international conventions that Canada has ratified, including the Convention on the Elimination of All Forms of Racial Discrimination, the International Covenant on Economic, Social and Cultural Rights, the Declaration on the Elimination of Violence against Women and the Convention on the Rights of the Child.

To nonlawyers like me, the logic seems simple. Religious freedom ends with harm or coercion. Polygamy is harmful to women and children. Therefore, religion ought not to provide shield or shelter for polygamists, and the men who perpetrate it ought to be prosecuted. It seems blindingly obvious that Canadians and our governments have failed the children of Bountiful. We have allowed them to be degraded, humiliated, abused, exploited and violated.

All the while we’ve congratulated ourselves on being among the world’s most compassionate and caring people. We care so much about human rights that we put our sons and daughters in harm’s way in countries like Afghanistan. Yet if we refuse to uphold the human rights of our own citizens and fail to bring our homegrown zealots and petty tyrants to heel, we have no moral authority to tell others what to do.

Daphne Bramham writes a social affairs column for Inroads and is a columnist for the Vancouver Sun. Read More