When a ballot is cast in a provincial election, citizens expect any one vote to carry the same weight as any other. After all, the democratic system is based on the premise of “one person, one vote.”

However, as urbanization continues in British Columbia, this principle is increasingly being violated. The gap between the proportions of voters in urban constituencies and rural constituencies has risen dramatically. In B.C., a rural vote can carry as much as three times as much clout as an urban vote in electing a member of the Legislative Assembly. For example, in B.C.’s 2009 provincial election, the MLA for Stikine was elected with 4,050 votes (50.4 per cent of votes cast), whereas the MLA for Vancouver-Fairview garnered 11,034 votes (47.1 per cent of votes cast).1

Several electoral boundaries commissions have made recommendations to remedy the erosion of voter parity, but a lack of political will and outdated provincial legislation inhibit any resolution. While this issue has garnered little attention among the urban public, it promises to become more prominent in the future.

Urbanization is a global trend and within Canada it is most pronounced in B.C., the country’s most urbanized province. The growth of cities can be attributed to internal rural-to-urban migration and foreign migrants choosing to settle primarily in cities. As of 1941, the shares of urban and rural populations in B.C. were relatively equal: 54 and 46 per cent respectively. However, as illustrated in figure 1, the urban share of B.C.’s population has steadily increased since 1941, reaching 85 per cent in 2006.2 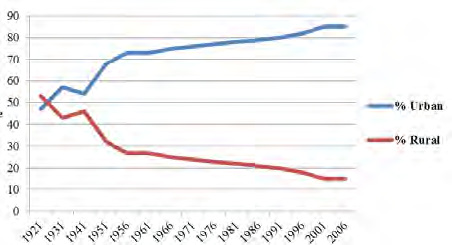 Projections suggest that this trend will continue over the next 25 years.3 Some rural areas – including the Kootenay, Nechako, the Cariboo and North Coast – will experience less than 12 per cent growth over 25 years. Other rural areas such as the Northeast, Thompson-Okanagan and Coastal Vancouver will experience growth of roughly 30 per cent. In contrast, the urban population is projected to grow by 45 per cent.4

While B.C. is not the only province that faces rural overrepresentation in its legislature, it lags behind in addressing the issue. Most provinces, particularly in western Canada, have legislated that, under specific conditions, a few ridings in remote areas may exceed their respective provincial deviation limit. However, B.C. has not been effective in enforcing legislation to limit rural overrepresentation. As illustrated in table 1, the share of nonconforming “exceptional” ridings in B.C. is far higher than in other western provinces.5

Legal precedents allow for provinces to set these deviation limits. In a 1991 decision, the Supreme Court found that the Saskatchewan government was reasonable in allowing variances of up to 25 per cent of electoral district population relative to the provincial average.6 In particular the decision stated, “Discrepancies between particular ridings appear to be justified on the basis of factors such as geography, community interests and population growth patterns.”

An obvious political problem here is that rural voters care about preserving existing electoral boundaries, while most urban voters are unaware of their underrepresentation. In comparison with urban voters, rural voters rely more heavily on access to an MLA to resolve their concerns. Hence, MLAs are reluctant to risk losing rural support for their political party by addressing an issue that most urban voters don’t even know exists.

Urban voting power will continue to erode if B.C.’s electoral boundaries process is not reformed. The dilemma is unlikely to be addressed until urban voters take notice, and to date they have not. Perhaps a catalyst is required for reform – something that triggers an outcry from urban citizens. One potential catalyst could be a Charter challenge undertaken by the B.C. Civil Liberties Association on the grounds that urban underrepresentation is so severe that it violates section 3: “Every citizen of Canada has the right to vote in an election of members of the House of Commons or of a legislative assembly and to be qualified for membership therein.” Until this happens, the issue of rural overrepresentation seems destined to remain at the level of a philosophical debate about the essence of democracy.

3 BC Stats, Overview of the B.C. and regional population projections, August 2010. Retrieved from here