For a time, it appeared that Canada had avoided the worst recent experiences of democracy elsewhere, but with the Doug Ford bozo eruption in Ontario, Canadian exceptionalism suddenly seemed less clear. The federal election this fall begins to appear as a gathering storm. Prime Minister Justin Trudeau may have begun his tenure in office with high hopes of new ways of doing politics. His term is ending in vituperative partisan squabbling, rancid regional recriminations and a bizarre spectacle in which two of his former ministers, promoted to purported sainthood status by the opposition, carried on a guerrilla war against the Prime Minister from within his Liberal caucus until they were finally expelled.

A common theme of both opposition and media is “Liberal arrogance,” paging back to the Liberal Party of the Prime Minister’s father. Liberals think they are the “natural governing party.” Out of touch with ordinary Canadians and alienated westerners, tied closely to the Ottawa bureaucracy and the central Canadian corporate elite, the Liberals run roughshod over opposition and even the rule of law to get their way.

Hang on a minute. This is not your parents’ Liberal Party.

The Liberals of the era from Mackenzie King to Pierre Trudeau constituted the Government Party, a big-tent catch-all centrist grouping that won most elections and was embedded deeply within the state and the corporate sector. It had no firm ideological anchor, but tacked to the right or left depending upon the prevailing electoral winds. The Government Party model actually reached its culmination not with the Liberals but with the Brian Mulroney Conservatives, who in 1984 won a commanding majority based on pluralities in all provinces and regions and governed mainly from the centre.

Yet by 1993 the Progressive Conservative Party had imploded, its two main pillars of support, Quebec and the west, kicked away, replaced by two new ideologically driven parties, the Bloc Québécois and Reform. A decade later the remnants of the old PC Party were the subjects of a hostile takeover by Reform, as the harder-line Conservative Party of Canada (CPC) took shape under Stephen Harper. With the breakaway on the far right by Maxime Bernier with his People’s Party and the rightward pressures coming from Ford in Ontario and Jason Kenney in Alberta, Andrew Scheer has bowed to the forces of the right on climate policy, immigration and the whole culture-war framing of political discourse by “alt-right” populism.

This is not your parents’ Conservative Party.

National politics have taken on a more sharply divisive shape, with the CPC firmly occupying the right while the centre-left is shared – or split – by the Liberals, NDP and Greens. Common ground in the centre is rapidly shrinking. How did Trudeau’s promise of “sunny ways” get overtaken so quickly by dark storm clouds of division? Personalities and personal failings are no doubt part of the story, but it is more revealing to look at deeper structural forces at work. 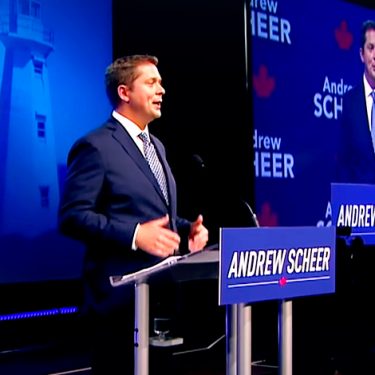 Perhaps the most dramatic changes have been in the transformation of the media by the new information technologies, which in turn have led to dramatic changes in political marketing. As early as the 1990s, parties were gaining access to new tools that could identify and target very specific electoral niches. The old catch-all parties of the past made broad-based appeals to voters who were identified only in wide categories. Parties consequently tended to congregate around the centre of the spectrum where the potential for growth seemed greatest. With more precisely targeted appeals now possible – greatly enhanced in the era of “Big Data” and sophisticated marketing algorithms – strategies to build a winning coalition of niche electorates have become more programmatic than in the past.

In the 1990s, the Mike Harris Ontario Tories were among the first to grasp the potential of identifying niche voters who could be won by a narrowly targeted program. This was branded the “Common Sense Revolution”; once in office, they diligently delivered on their specific promises to targeted voters.

A key point is that the new politics rewards divide-and-rule tactics over appeals to common purpose. The new technologies encourage separate social media echo chambers in which particular groups hear and see only what they want to hear and see, rarely engaging directly with those of differing views. Harris Tories saw the partisan advantages of dividing Ontarians against one another. All the groups alienated by their neoliberal austerity policies – welfare recipients; unionized workers; feminists; gays and lesbians; various other minority communities – were spotlighted as enemies of the pocketbooks of Tory supporters (rebranded “taxpayers”).

The Ford Conservatives are a cartoon version of their predecessors. The programmatic breadth of the Common Sense Revolution has been replaced by “buck a beer” and tailgate parties. What persists is aggressive divisiveness and a drift to the further reaches of the right, mirroring perhaps the same movement among their core base. But for all Ford’s populist bluster of being “For the People,” he was elected premier with only 40 per cent of the vote but a legislative majority thanks to first-past-the-post and a split on the centre-left between the defeated Liberals and the NDP. In a clear warning to the federal parties, an Ontario electorate determined to throw out the Kathleen Wynne Liberals paid little attention to what the alternative really was. When it became apparent that the NDP had moved into place as the only viable competitor to Ford, Wynne conceded defeat and astoundingly urged Liberal voters in key contests to back the Tories rather than their hated competitor on the left. The relatively progressive Liberal agenda was thus sacrificed to a Tory bonfire: Wynne’s cap-and-trade carbon reduction program was immediately scrapped and Ford emerged as a leading opponent of the national climate plan.

On the federal scene, after nine years of a CPC government that was in many ways based on the Harris blueprint – although mitigated by many more compromises with the realities of a regionally and culturally disparate country – Justin Trudeau demonstrated his grasp of the new political dynamics in his 2015 victory. He saw no point in seeking votes on the right where the CPC support base is rock-solid. Instead he adroitly outflanked Thomas Mulcair and the NDP on the left by promising deficits, social spending and increased taxes on the highest-bracket earners. In office the Liberals have, by and large, continued to govern from the centre-left. With the national climate plan, they have mounted an ambitious and systematic approach to combating climate change, including a Canada-wide carbon pricing regime.

Yet Liberal prospects in 2019 are clouded. The centre-left vote may be splintered three ways as Liberal support drains off to the NDP and the Greens. There is a very real possibility of a CPC in thrall to the far right coming to power over a fractured centre-left. They do not have to go far beyond their one-in-three core base to do this, so long as the centre-left is deeply split.

If Trudeau has lost leadership of the centre-left, he has himself to blame, at least in part. Among the debit-side entries:

SNC has highlighted the core Liberal problem. Former Attorney General Jody Wilson-Raybould appears to represent a principled ethical stand, while Trudeau appears to represent an old and discredited way of doing politics. In an era when there is widespread revulsion against political elites and an appetite for voting in populist “outsiders” to “drain the swamp,” it is any democratic leader’s nightmare to be caught looking like a deer frozen in the searchlights of the social media avengers – especially when the same leader came into office promising a new way of doing politics.

Without in any way questioning Wilson-Raybould’s probity, the juxtaposition of a principled minister vs. an unprincipled prime minister is not in the end very helpful. Despite populist illusions, governing means making choices, which are inevitably compromises among a “people” always divided over public policy. Making laws is still like making sausages: best judge the end result rather than the process. Every populist movement that has arrived in office has had to either compromise with reality or fail.

Trudeau may not have done himself any favours by overselling how different he would be, but as a leader of a fractious democracy he must follow what Max Weber called the “ethic of consequences” that faces anyone holding power over others. This ethic may often be at odds with the “absolute ethic” that those without power can follow. The Prime Minister’s behaviour over SNC may, as Wilson-Raybould herself has acknowledged, be “inappropriate” without being “illegal.” Despite Andrew Scheer’s claim of “corruption,” there is no evidence of bribery or other corrupt relationship with the company in Trudeau’s advocacy of the alternative remediation agreement route for SNC as being in the public interest.

Those disappointed with the Liberals’ performance might remember Maurice Chevalier’s comment on the discomforts of old age: “Consider the alternative.” The CPC alternative in 2019 is a party committed to a demagogic campaign against the carbon tax founded on an outright lie denying the rebates that will more than compensate people for increased energy costs. This in the face of an alarming report that Canada is warming at twice the global average rate. In the face of the enormity of the challenge, the CPC position may not constitute outright climate change denial, but it certainly constitutes solution denial, which is equally reckless. Carbon pricing is not the sole answer but it is a large part of the solution, and a part that works with the market, not against it. If the CPC is successful in conning its way into office with a shamelessly disingenuous appeal to the lowest common denominator of self-interest at the expense of what is at least a recognition of the existential threat to the planet, Canadian democracy will have truly failed in as unambiguous a fashion as American democracy did when it elected a serial liar and conman to the highest office in 2016.

The NDP and the Greens will argue, not without reason, that the Liberals’ environmental record is poor – the now federally owned Trans Mountain pipeline being an own-goal against their national climate plan. But the potential of vote splitting on the centre-left allowing Scheer into office cannot be dismissed. Of course, if Trudeau had actually followed through on his oft-repeated promise to make the 2015 election the last first-past-the-post contest, we might not be having a conversation about vote splitting. Just one more self-inflicted wound.