In its parliamentary election on September 13, Norway took a clear turn to the left. Of the 3,876,200 eligible voters in the election – held four years after the last one according to Norway’s fixed-date system – 77.2 per cent cast ballots. The ruling minority centre-right coalition went down from 61 seats in 2017 to 47 in 2021, out of a total of 169 in the Storting, the Norwegian parliament. The right-wing populist Progress Party (FrP), which withdrew from the ruling coalition in 2020, also lost six of the 27 seats it held in the last parliament. Thus, whereas overall the centre-right parties had a majority of seats in the outgoing parliament (88 out of 169), they now have only 68 seats.

If we look at the overall pattern of party system change, the main result was political fragmentation. Both of the two largest parties lost seats, with Labour (AP) losing one seat and the Conservatives (Høyre) losing nine. The biggest winner was the centrist Centre Party (SP), which increased its seat total from 19 to 28. A similar gain took place on the far left, as Red (Rødt), a former Marxist-Leninist party, crossed the 4 per cent threshold and increased its number of seats from one to eight.

Domestic issues dominated the election campaign, and there was very little focus on foreign policy. There were flashes of attention to Norway’s relationship with the European Union, the main question being whether the expected change in government would lead to changes in Norway’s EU affiliation, given that the Centre Party is deeply Eurosceptic. The early stages of the election campaign were marked by a “revolt of the periphery,” which was directed against Oslo and other cities and gave a major boost in support to the rurally based, agrarian Centre Party.

The Centre Party could draw on popular opposition to a regional reform which had amalgamated regions and created the geographically awkward region of Viken, which stretches considerably to the north from the southeastern border with Sweden. A similar change took place at the northern tip of the country, where the two northernmost regions, Troms and Finnmark, were amalgamated against the will of the majority in Finnmark (the No side had won a referendum on the issue by a clear margin: 87 per cent against with 58 per cent participation). There was also discontent with the closure of local police stations and hospitals.

With the revolt of the periphery as a major impetus, in early January 2021 it looked as if the Centre Party could overtake Labour in the polls, and Centre Party leader Trygve Slagsvold Vedum declared himself ready to become prime minister. There were thus three candidates for prime minister going into the final stages of the election campaign: the incumbent Conservative Erna Solberg, Jonas Gahr Støre of Labour and the Centre Party’s Vedum. As the campaign unfolded, the centre-periphery and urban-rural conflict subsided somewhat, while inequality and the green transition moved to centre stage. All parties on the centre-left made rising socioeconomic inequality a theme of their campaigns. But there were competing accounts as to which aspect of inequality should be addressed, as the Centre Party stressed its rural-urban dimension.

The green transition issue gave the Greens (MDG) a boost in the polls, but in the election the party fell just short of the 4 per cent threshold and therefore only obtained three seats. The other main environmentally focused party, Venstre (as the Liberal Party is known), which had been part of the governing coalition, managed to hold onto its eight seats. The Socialist Left Party (SV), whose campaign stressed both socioeconomic inequality and the need for a green transition, gained two seats to end up with 13. The Centre Party is somewhat divided on how committed to the green transition Norway should be and for some time even prevaricated over whether it thought Norway should be committed to the Paris Agreement, although it came down in support of it eventually. On the other hand, the Progress Party has long been a petro-populist party and is a staunch supporter of the oil industry. 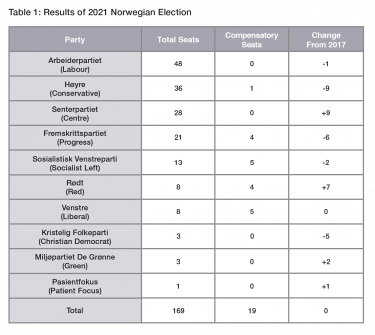 The government’s loss of seats cannot be easily attributed to the COVID-19 pandemic. Norway’s fatality numbers during the COVID-19 period were lower than in a regular influenza year, and the Norwegian government has launched a range of policy programs to buffer people from the pandemic. The negative effects have been far from equally distributed, but it is difficult to pin the responsibility squarely on the government, which as a minority coalition has depended on parliamentary support from opposition parties that at times have dictated government policy.

The election result paved the way for a change in government. Unlike Germany, where the Social Democrats governed together with the Christian Democrats until this fall’s election, Norway has no tradition of grand coalitions, and its coalition governments are aligned along the right-left dimension. The left-right cleavage structure is complex, however, with a significant centre-periphery and urban-rural dimension cutting through it. That means that some parties can change sides, as has been the case with the Centre Party. Minority governments without the two large parties are rare. The norm is either a coalition to the left led by Labour or a coalition to the right led by the Conservatives.

As leader of Labour, the largest party, Jonas Gahr Støre initiated talks with potential coalition partners. He sought to reinvigorate the so-called red-green coalition consisting of Labour, the Centre Party and the Socialist Left Party, which governed between 2005 and 2013. In this coalition, which was led by Jens Stoltenberg (now NATO Secretary General), Støre served as foreign minister until 2012 and then health minister. Støre’s model coalition was weakened by internal divisions within the Socialist Left Party, with a minority often demonstrating against its own government.

The Socialist Left Party wanted to make sure that this time around it would not repeat the same mistake and therefore pulled out of the coalition talks to try to make more of a mark on its own, stating that it did not believe the other two parties were willing to go far enough in tackling socioeconomic inequality and environmental degradation. The upshot was that the two remaining parties, Labour and the Centre Party, were left to reach a deal. The new government is thus a minority coalition, with a total of 76 seats. The Socialist Left seats would have brought it up to 89 and a majority in the Storting. In any case, the minority Støre government will seek Socialist Left support before crossing the ideological left-right divide.

Labour and the Centre Party signed a governing platform declaration, dubbed Hurdalserklæringen from the town of Hurdal north of Oslo where it was negotiated. This 86-page declaration lists the government’s objectives in considerable detail and sets out a left-leaning agenda quite different from that of its centre-right predecessor. Key objectives include: steering a safe economic courseand just distribution; creating jobs and cutting greenhouse gas emissions; a just climate policy; green choices that tie the country together; a safer work environment for everyone; and welfare for all. The platform promises to tackle inequality along both socioeconomic and regional lines, but has been criticized for not doing enough about socioeconomic inequality, especially poverty in the cities. It has also been criticized for not paying enough attention to environmental challenges.

During the campaign the Green Party, in particular, called for a fixed date to end oil exploration, and Labour’s Youth Organization (AUF) took this position as well. The government program instead speaks of developing and not dismantling the petroleum sector. Commentators also note that the government compromised on CO2 emissions, especially given that the Centre Party was against passing on the costs to motorists in the regions. As a result, as was noted, the new government’s budget is less environmentally oriented than was the outgoing government’s alternative budget, but that governrment knew that its budget could never be implemented given the refusal of its partner, the Progress Party, to go along. Some commentators have concluded that Norway is far more willing to fight climate change abroad than at home.

The question of Norway’s EU affiliation has been the most controversial issue in Norwegian politics in the postwar period. Two popular referendums have been held, in 1972 and 1994, and both turned down EU membership by small margins. Nevertheless, Norway’s EU affiliation through the European Economic Area Agreement (EEA) and some 70 other agreements make Norway so closely affiliated with the EU that Norwegian nationals are de facto EU economic citizens (although not political citizens as are citizens of EU member states). Some argue that the No side won the 1994 referendum but has lost ever since.

The text of the new coalition government’s platform position on Norway’s EU relationship is an amalgam of the statements on Europe of one broadly speaking pro-EU party and one very Eurosceptic one. The new government reiterates the “gag rules” meant to keep a lid on the EU membership issue and any serious change to the status quo. The tacit understanding is that if either party actively starts working toward changing the status quo, the coalition will unravel. The present governing configuration therefore falls into an established pattern of governing coalitions “freezing” the status quo, of which the EEA is the centrepiece.

The election campaign reflected the long-established Norwegian cleavage pattern that intertwines left-right with centre-periphery/urban-rural conflicts. The new minority coalition government has pledged to cooperate with the parties to its left. Nevertheless, the coalition reflects the attempt to reconcile left-right and centre-periphery concerns. This places the main governing party, Labour, in a squeeze: between a strengthened Centre Party to its right and a strengthened left flank with the Socialist Left and Red parties. This could be quite a precarious position, with the prospect of hemorrhaging voters either to the right or to the left, depending where it sets its foot. It remains to be seen how well Labour
will keep its balance.

This article was published as part of a larger elections feature for Inroads 50. To check out the rest, go to Elections Bring Change (Except in Canada).

John Erik Fossum is professor at the ARENA Centre for European Studies, University of Oslo, Norway. He holds a PhD in political science from the University of British Columbia (1990). Read More