Image: From Kremlin.ru, CC BY 4.0, via Wikimedia Commons

Vladimir Putin and his admirer Donald Trump have much in common. What has become clear is that both live in worlds of their own. In Ukraine, the destructive effects of this are there for all to see. In the United States, it constitutes a not-so-obvious potential threat to democracy itself.

In late 1949, George Orwell published his bleak dystopian novel 1984. He sensed his impending death from tuberculosis and was deeply pessimistic about the evolution of geopolitics. The optimism following the Allies’ victory over fascism had quickly degenerated into an ideological impasse. In 1946, Churchill introduced the image of an “iron curtain” falling over eastern Europe.

The parallel with present geopolitics is obvious. The geopolitical optimism of the decade following the fall of the Berlin Wall has disintegrated.

In a recent press conference convened by the Russian foreign ministry, Maria Zakharova, a senior Russian diplomat, was asked about 1984. She replied, “Orwell did not write about the USSR, it wasn’t about us. He wrote about the society in which he lived, about the collapse of the ideas of liberalism. And you were made to believe that Orwell wrote it about you.”¹

We are in an ideological hall of mirrors, with no obvious exit. If Zakharova has read the novel – which is doubtful – she is lying about Orwell’s intent. On the other hand, she is telling the truth in asserting a collapse of liberal ideas, now if not in the late 1940s. The liberal Russians who ran Russia in the 1990s created chaos. They presided over a dramatic rise in unemployment, expropriation of public assets by emerging oligarchs and a decline in life expectancy (from 65 to 58 for men and from 75 to 71 for women between 1985 and 1995). Boris Yeltsin yielded power to a KGB colonel who knew how to create an effective dictatorship that would enjoy majority support. Among his tactics has been near-total control of the media. The Economist has published a sample of typical of Russian media reporting on the war in Ukraine (see box).

The U.S. equivalent of Zakharova is Donald Trump’s persistent claim that liberal elites running the Democrats won the 2020 presidential election by electoral fraud. There is no credible evidence about major Democratic fraud that could have affected the results. On the other hand, there is irrefutable evidence that Trump attempted to win reelection by fraud. Perhaps, the most significant evidence is the recorded telephone call between Georgia Secretary of State Brad Raffensperger and Trump.² Over a lengthy conversation, Trump attempted, unsuccessfully, to persuade Raffensperger to shift state vote totals sufficiently for Trump to win Georgia’s electoral votes. 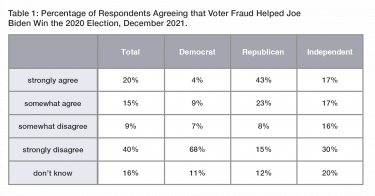 The attempt at fraud is bad enough. More disconcerting is that, a year after the election, more than a third of Americans, including two thirds of Republican supporters, believe Trump’s lie. In December 2021, Ipsos conducted a professional survey on behalf of NPR. Table 1 shows results in response to the question “Do you agree or disagree voter fraud helped Joe Biden win the 2020 election?”

Most Russians will never learn how much they were lied to, though they will surely realize that, however legitimate the invasion, the cost in lives and rubles will have been too high. The effects of Trump’s lies in the United States will be harder to gauge. What if the two thirds of Republican supporters who believe in Biden’s “steal” of the 2020 election conclude that the 2024 election is valid only if their side wins? The future of American democracy is seriously in doubt.

Excerpts from “The Putin Show: How the War in Ukraine Appears to Russians,” published in the Economist on May 17:

You wake in your flat in a new high-rise on the outskirts of Moscow. Your ageing mother has left a copy of Izvestia, a popular conservative daily, on the kitchen table. Scanning the front page, you encounter familiar storylines.

“My ancestors defended the Motherland from Nazism, and I will defend it too”. So says Vladimir Mashkov, a famous actor. You read that “Azov”, a Ukrainian battalion with far-right ties, has left a trail of war crimes and civilian murders in its wake. According to the newspaper, British troops created and trained the group, fostering its Nazi ideology and adherence to neo-pagan cults.

You learn that Russian volunteer medics are hard at work in the Donetsk People’s Republic. Russians are saving lives in Ukraine.

You learn that Russia’s budget surplus reached 800bn roubles, thanks to plentiful oil revenues. So much for Western sanctions.

You scan your phone while at work. The trending news tab on VK, Russia’s most popular social network, points you to a channel on the “situation around Ukraine”. The official explains that it is the will of the people of southern Ukraine to rejoin the motherland, and that Ukrainian rule has only brought repression and suffering.

You see officers of Russia’s security services capturing a Ukrainian Nazi sympathiser who planned a terrorist attack on Victory Day.
Early in the war reporting was triumphalist. Journalists implied the “special operation” would be concluded within days or weeks. Commentators questioned Ukraine’s statehood, warned of Nazis, accused the West of cultivating said Nazis and insisted the Ukrainian people were awaiting liberation. Many repeated one of Mr Putin’s first explanations for the invasion: if Russia had not made a preventive strike, it would have been attacked.

As the conflict has dragged on, the tone has become increasingly hysterical. The fighting is portrayed as but one front in a war with the West. Sanctions are proof of the West’s intention to bring down Russia.

Civilians in Bucha, a town north of Kyiv, were massacred by … Ukrainian soldiers. Western secret services arranged the bodies on the roads for journalists to find. Russian media “tell about a Mariupol where Russian tanks are met with flowers”.

Audiences are told that Russian troops have taken extra care to avoid civilian casualties, which is difficult because Ukrainian Nazis tend to hide in apartment blocks … why the operation is taking so long.

Russia’s existence as a nation, Russian history, Russian culture and the right to be Russian are under assault. Parallels with the Great Patriotic War tap into the memory of a righteous existential struggle against Nazism. Hosts evoke the idea of a holy war, telling viewers that God is on Russia’s side against the evil Western forces that encircle it.

As you drive home, stuck in traffic along the Third Ring Road, you catch the news on the radio. The talk of biolaboratories seems fanciful, like something out of science fiction. But then so much of life since the pandemic began has been. You still aren’t exactly sure who Soros is, but if he is involved, it must be bad.

After dinner, you watch a talk show hosted by Vladimir Solovyov. His monologue, delivered from a sleek studio, has a clear set of messages. The West seeks nothing less than Russia’s complete destruction, Mr Putin has the trust of the Russian people and it is time for you to show your support.

Channel One has replaced entertainment with extra current events … In place of daytime shows are programmes like “Anti-Fake”, where panellists dismantle Western “disinformation”.

Russians can still access unofficial information. Yet the bans have had an effect. Before the war, around 30% of Russians used Instagram each day. The share had fallen to just 10% by late April. Many Russians, especially older ones, do not have the means or skills to use VPNs, and Western sanctions have made paying for them tricky, too.

People tend to believe stories that reinforce their existing beliefs. Mere repetition can also make information seem more believable. In today’s Russia, those mechanisms are reinforced by violence and repression. Challenging or questioning the official narrative moves you out of your comfort zone and into jeopardy.

Of course, Donald Trump does not have Putin’s means of exercising mind control. The situation is rather one of a media environment favourable to his lies. Here we rely on some equally impressive reporting from the New York Times. The first is from a detailed study of the content of all 1,150 episodes of Tucker Carlson Tonight on Fox News published on April 30:

When you enter Mr. Carlson’s world each night, you are among his three million-plus viewers — and part of a Fox News audience that is 92 percent white and overwhelmingly older, according to Nielsen data. They are the “ruling class.” They threaten everything you believe in. They include Democratic (and some Republican) officials, members of the media, Big Tech executives, academics, sports and Hollywood stars, and others. Many … have been attacked in dozens or even hundreds of episodes.

Not only do they want to control you, Mr. Carlson warns, they want to destroy you and your way of life. They have various ways of doing this, he asserts, including importing immigrants from the “third world” to replace you with more “obedient voters.”

Another New York Times article examines the pervasiveness of lies about the 2020 election in state legislatures:

The Times’s analysis exposes how deeply rooted lies and misinformation about former President Donald J. Trump’s defeat have become in state legislatures, which play an integral role in U.S. democracy. In some, the false view that the election was stolen — either by fraud or as a result of pandemic-related changes to the process — is now widely accepted as fact among Republican lawmakers, turning statehouses into hotbeds of conspiratorial thinking and specious legal theories … Election and democracy experts say they see the rise of anti-democratic impulses in statehouses as a clear, new threat to the health of American democracy. State legislatures hold a unique position in the country’s democratic apparatus, wielding a constitutionally mandated power to set the “times, places and manner of holding elections.”

All is far from lost, the article concludes:

In most states, the lawmakers who challenged the 2020 results do not yet have the numbers, or the support of governors, secretaries of state or legislative leaders, to achieve their most audacious aims … It is only a minority of Republican lawmakers who promote the legally dubious view that they – and not the votes of the people – can select the electors who formally cast a ballot for the president in the Electoral College.

¹Pjotr Sauer, Orwell’s Nineteen Eighty-Four was about Liberalism, Not Totalitarianism, Claims Moscow Diplomat, The Guardian, May 23, 2022.