by Jamie Swift and Bob Chodos

It is one of the ironies of recent Quebec history that the same Catholic Church that was the central institution in the old, pre–Quiet Revolution Quebec also nurtured some of the leading figures in the new, more secular society that succeeded it. Two such figures were Claude Ryan and Eric Kierans, both of whom died earlier this year.

Both grew up in struggling but ambitious families in modest neighbourhoods in southwestern Montreal – Kierans in Saint-Henri, Ryan in Ville Émard. Both made it to postsecondary education through their own ability. Ryan, later the most intellectual of politicians, left the University of Montreal after two years because “it wasn’t serious enough and I didn’t really need it.” For Kierans, however, Montreal’s Jesuit-run Loyola College was formative.

Aside from the intense regime of classical studies, the young Jesuit scholastics who carried much of the teaching load at Loyola offered a wealth of extracurricular activities from dramatics to journalism and, of course, debating. The Jesuits, always good talent-spotters, were not only impressed by Kierans’s lively mind and keen competitive spirit. They were also able to offer as teachers two towering young intellectuals who became Kierans’s lifelong friends. 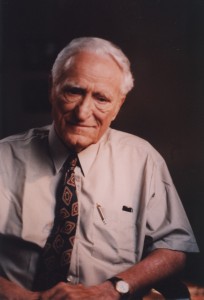 Bernard Lonergan, who taught Latin and Greek, would become one of the preeminent Catholic theologians of the 20th century. At the time “Bernard the Deep-Brow’d,” as he was known to his students, was already grappling with the question that became central to his life: what does it mean to know something? Although Lonergan was not the best pedagogue at Loyola, Kierans was attracted to his deep spirituality.

Kierans’s other big influence was Eric O’Connor, who got a Harvard doctorate in mathematics in one year while also studying theology. The boys in Lonergan’s classes were bowled over by O’Connor’s enthusiasm as he peppered them with endless open-ended questions. Like Lonergan, he impressed Kierans as someone to emulate.

After spending 10 years making money, first as a flour salesman in Atlantic Canada and then as an entrepreneur, Kierans jumped back into liberal learning, enrolling in economics and political science at McGill. While at McGill, Kierans got involved with the intellectually upwardly mobile English Catholics whose postwar energies were focused on the new Thomas More Institute for Adult Education.

The Institute attracted people in their thirties and forties, many of them teachers, who were groping for new light in what they saw as the intellectually joyless world of Catholic culture. The moving figures were Charlotte Tansey and Eric O’Connor, who invited his friend Bernard Lonergan to address the early sessions. “What came through from this was that all questions could be asked and should be asked,” recalled O’Connor. “That in fact one didn’t begin to learn until one began asking questions.”

Kierans was not part of the organizing core of the Institute because he was busy with business and academic pursuits that led to his appointment as the head of McGill’s School of Commerce in 1953. McGill’s longtime principal was the imperious Cyril James, described by one old hand at the university as a “man of iron whim.” Kierans clashed with James over the principal’s proposal to set up an MBA program. Kierans did not share the technocratic credentialism that would eventually make the MBA degree such a hot academic commodity. He wrote that “we are in no sense a vocational school … concerned to graduate personnel managers marketing specialists.” McGill started its MBA program only after Kierans left in 1960 to become president of the Montreal Stock Exchange.

During these years, Claude Ryan was secretary of the French section of Catholic Action in Canada, a position he took on while still a university student in 1945. Catholic Action was an umbrella for organizations of lay Catholics in various walks of life, and an antidote to the clericalism of the pre–Vatican II church. Meanwhile, Ryan studied church history at the Gregorian University in Rome and deepened his familiarity with Catholic thought, developing a sophisticated understanding of the philosophical basis of Catholic action in the temporal world. He was especially influenced by the liberal Catholic philosopher Jacques Maritain, a leading member of the personalist school that also influenced André Laurendeau, Pierre Elliott Trudeau and other Quebecers of their generation.

The rapid change that began in Quebec with the election of Jean Lesage’s Liberals in 1960 after the long Duplessis years would propel both Kierans and Ryan onto the public stage. As president of the Montreal Stock Exchange, Kierans, unlike most of Montreal’s English business elite, was sympathetic to the new government’s reforms.

When Natural Resources Minister René Lévesque sought to nationalize Quebec’s private electricity companies, Kierans arranged to have investigators employed by Lévesque adviser Jacques Parizeau examine the trading records of certain companies. This allowed Lévesque and company to get an accurate fix on share prices before making a public offer for the companies. Of course, Montreal’s business bullhorns quickly trumpeted their objections about Lévesque hammering them with the heavy hand of the state. What really irked the financiers, Kierans explained, was not getting inside knowledge of what was about to unfold: “If they had known, they could have made some money on the tip! All that English outrage was just so stupid.” Soon afterward, Kierans entered Lesage’s government as Revenue Minister, and frequently made common cause with his new friend Lévesque against the more cautious elements in the Liberal Party and the Anglo financial establishment.

In 1962, Ryan joined the editorial team of Le Devoir, the noncommercial Montreal newspaper founded by Henri Bourassa in 1910 as a voice for both Catholicism and French Canadian nationalism. During the 1950s, under the leadership of Laurendeau and Gérard Filion, Le Devoir had been both a lone voice of opposition to the Duplessis government and a forum for the renewal of nationalist and Catholic thinking. But both Laurendeau and Filion were about to leave – Laurendeau to become cochair of the federal Royal Commission on Bilingualism and Biculturalism, Filion to head one of the Quebec government’s major new economic levers, the Société Générale de Financement. Ryan was appointed to succeed Filion as directeur (publisher), despite Laurendeau’s fears that he was not sufficiently nationalist. In his 14 years in that position, Ryan maintained the intellectual standard set by his predecessors.

In the late 1960s, especially after the defeat of the Lesage government in 1966, Quebec nationalism moved increasingly toward advocacy of a sovereign Quebec, a development that caused dilemmas for both Kierans and Ryan.

In 1967, René Lévesque attempted to persuade the Liberals to embrace Quebec sovereignty; Kierans, then president of the Liberal Party, was backed by the party’s old guard against his former ally in the fight that led to the defeat of the sovereignty option. Lévesque then left the Liberal Party to form what became the Parti Québécois. Kierans also left, running against Trudeau to succeed Lester Pearson as federal Liberal leader in 1968 and then narrowly winning a federal seat in that year’s Trudeau sweep. Appointed to the cabinet as Postmaster-General, he got into a fight with unionized truck drivers in Montreal. The high-profile dispute soon became a cause célèbre for Quebec nationalists and when the FLQ manifesto appeared during the October Crisis of 1970, Kierans was denounced as one of the worst of the “big bosses.”

Although he relished the role of maverick throughout his career, he found himself truly isolated in Liberal Ottawa. As an economist, he had lots of ideas about reforming the tax system so that corporations should pay more. The mandarins at Finance and the dominant wing of the Liberal Party had other ideas. Kierans was the odd man out. After quitting politics in 1971, he returned to McGill’s economics department and summarized Canada’s fiscal system in the pages of an academic tax journal: “To him that hath, to him shall be given.”

Ryan also played a prominent role in the October Crisis, seeking an alternative to the intransigence of the Trudeau government. After the FLQ had kidnapped a British trade official and a Quebec cabinet minister, Ryan and Lévesque were the two leading signers of a statement urging negotiation to save the lives of the hostages. Trudeau, who considered the statement a sign of dangerous vacillation in Quebec opinion, proclaimed the War Measures Act instead.

Six years later, in an editorial in Le Devoir, Ryan endorsed Lévesque in the election that led to the PQ’s historic victory. However, he did not give up his federalist convictions, and successfully ran to fill the vacant leadership of the Liberal opposition. In that capacity, he led the victorious No side in the 1980 sovereignty-association referendum, presenting in the Beige Paper a federalist alternative to the PQ’s sovereignty proposal.

But Ryan’s character and temperament were not well suited to leadership of a political party. He was overshadowed by Trudeau in the referendum campaign, undermined by the aggressive centralism of Trudeau’s efforts to repatriate the constitution that followed the referendum, and unsuccessful in his attempt to unseat Lévesque in the 1981 provincial election. He resigned as leader, but stayed on as a member of the Legislative Assembly and, when the Liberals were returned to power under Robert Bourassa in 1985, served honourably as a cabinet minister for nine years. In a period when sovereignty again became a major issue with the failure of the Meech Lake Accord, Ryan emerged as a leader of the cabinet’s staunchly federalist wing.

In their latter years, both Kierans and Ryan enjoyed being “free from the responsibilities and constraints of office,” as Ryan put it. After retiring from McGill at age 65, Kierans moved to Halifax, where he had been a flour salesman 50 years previously. Based at Dalhousie University, he developed a following among CBC radio listeners as a member of Peter Gzowski’s Morningside panel with Dalton Camp and Stephen Lewis. “Lookit,” Kierans would sputter as he tried to jump into the conversation, his tongue trying to keep up with his lively mind. He would proceed to describe free trade is a policy that favours the strong. Maybe it would be the real scoop on the most recent federal-provincial squabble. Or the folly of Reaganomics. He came off as a scrappy kid from Saint-Henri. “Kierans is an old guy who doesn’t have old ideas,” said Gzowski at the time.

Ryan, the university dropout, ended his life as a university teacher, giving courses at McGill on Catholic social thought. He also gave a remarkable account of what it means to be a Catholic in politics in a lecture at St. Jerome’s University in Waterloo, Ontario, in the fall of 2000, an edited version of which was published in Inroads the following year (in the same issue as a review by John Richards of Kierans’s memoirs). Drawing on the broad range of Catholic thinkers with which he was so familiar, especially St. Augustine and John Henry Newman, Ryan outlined ways in which one could participate in the daily compromises that are inevitable in politics while still remaining true to the principles of one’s faith. “Society needs, above all, politicians who are not dogmatists,” he said, “but who are professionally capable and morally strong.”

There are few such politicians; both Kierans and Ryan were among the few.