On occasion, my interest in South Asia comes to the fore and I prevail on my Inroads colleagues to publish relevant articles, some written by me, some by others. In Summer/Fall 2018 we published Why is South Asia Poor?, a précis of a chapter in a book that I and two Bangladeshi colleagues have written. The book surveys the lamentable state of primary education in most of South Asia – and the difficulty of reform (it will be published by University of Toronto Press this fall). In Summer/Fall 2020, we published Something is Rotten in the State of India: An Election in Delhi, a Ghost in Denmark and a School in Bangladesh. The motivation for that article was the concerted, but fortunately unsuccessful, campaign by Prime Minister Narendra Modi’s political party to dislodge the reform government in Delhi in a bitterly fought state election. We continue the tradition here with Sumbal Naveed’s article on the decline in reading habits among young Pakistanis. Her evidence comes from a USAID-supported survey.

Click to read Why Young Pakistanis Don’t Read by Sumbal Naveed, and our accompanying photo essay, In School, But Are They Learning?

It is hard to exaggerate the importance of literacy in understanding why some countries are rich and others poor. Figure 1 illustrates literacy trends over three decades, by gender, in South Asia’s three populous countries: India, Pakistan and Bangladesh. The data are estimates by the United Nations Educational, Scientific and Cultural Organization (UNESCO). Obviously, there was progress in the intervening decades. However, literacy is a complex concept; the UNESCO threshold defining literacy is low (e.g., ability to read short articles in a newspaper) and literacy is self-reported in many of the national surveys on which UNESCO relies. Also obvious is persistence of a gender gap in literacy – even among young adults in school in the 1990s and this century. 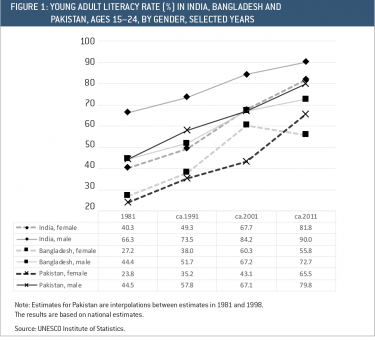 Naveed refers in her article to the Annual Status of Education Report (ASER), a large-scale early-grade assessment conducted in India and Pakistan. In India the sample size is about 500,000, in Pakistan about 80,000. ASER’s literacy threshold is the ability to read a short story (about 200 words) in the Grade 2 curriculum in the dominant regional language. In Pakistan, the three languages are Urdu, Sindhi and Pashto. In the most recent (2018) survey in India, 27 per cent of Grade 3 students could read the story, in Pakistan 17 per cent. By Grade 5, in both countries about half could read the Grade 2–level story.