I arrived in Israel Friday morning, travelled to Bethlehem in Palestine, and then to the international city of Jerusalem. There’s no trace, that I’ve seen, of the apparently upcoming war with Iran or the recent protests against the Palestinian Authority.

The English version of Haaretz, Israel’s left-wing newspaper, is bustling with attacks on Netanyahu’s efforts to destroy Israel. I am reminded of a column by New York Times columnist Paul Krugman from a few months back: “It seems obvious from here that the narrow-minded policies of the current government are basically a gradual, long-run form of national suicide.”1

According to several major Jewish journalists in the United States, that suicide is no longer “long-run.” The New Yorker’s David Remnick: “It is hard to overestimate the risks that Benjamin Netanyahu poses to the future of his own country.” M.J. Rosenberg, formerly of AIPAC and Israel Policy Forum: “Binyamin Netanyahu poses an existential threat to the Jewish state. Those who claim to care about Israel need to speak out. Will we really allow this rightist egomaniac to destroy a 2000 year old dream?”

How did it come to this?

Initially it seemed the threatened bombing of Iran was just another diversion from settlement expansion. As long as Israel was killing or threatening to kill people in Lebanon, Gaza or Iran, no one paid attention to Palestinians losing their homes. (Even now, under cover of potential international disaster, Israel – not the settlers’ organizations but the actual government of Israel – is seeking a ruling from Israeli courts to allow it to build 40 new settlements on privately owned Palestinian land.)

I guess they do. And if they – Netanyahu and his supporters and Jewish Israelis – really do think they run the world, how did they come to believe such a ridiculous thing?

Pretty much every country in the world – including Canada – regards Gaza, the West Bank, the Golan Heights and Jerusalem as occupied territories and regards the settlements in the West Bank and East Jerusalem as illegal under international law. But Israel has annexed the Golan and Jerusalem and continues to build and expand settlements – and force Palestinians from their homes. Israel has been creating refugees and illegally refusing their return since 1948. 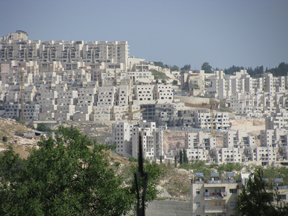 What’s the consequence? Preferred status in trade with Europe. Canadian sycophancy. Charitable status for illegal settlements. $3.5 billion in annual untied aid from the United States. The United States goes against its own policies and interests in the Arab world by vetoing UN resolutions on Israel. Israel humiliates the U.S. Vice President when he visits and there is no consequence. Israel’s Prime Minister openly defies the U.S. President in a speech before the Congress in Washington, and what’s the punishment? One standing ovation after another.

No wonder Israeli Jews think they’re omnipotent. If Israeli leaders believe Israel has a free hand to do whatever it wishes, where did they possibly get that idea?

My point is, this isn’t sudden. Israel has always been allowed to get away with – literally – murder. The consequences for Palestinians have been disastrous. The consequences for the world – 100 years of increasingly bad relations between the West and the Arab and Muslim worlds – are immeasurably awful.

I read an article by Sefi Rachevski in yesterday’s Haaretz:

We are probably confronting a final moment. The moment that realization of … the inability to change things spreads, emigration and the collapse of the liberal bubble that maintains Israel will soon follow … The religious right received 65 seats thanks to poor voter turnout among moderates. The hope and the fury that created the 2011 social protests; the existential danger in the face of the dominant extremist atmosphere – including arrogant foreign policies that isolate Israel – could … give rise to a non-religious, non-racist government … that will stop subsidizing and stop nurturing the racist-extremist hothouse.2

But from the point of view of Palestinians, it’s not a big deal. Israel’s plan to populate and annex the occupied territories has proceeded under all Israeli governments. The left, as much as the right, has excluded Palestinians from Israel’s democracy – completely in the occupied territories but also, to a great extent, within Israel itself. The left, like the right, has been deaf to the rights of refugees. Finally, there’s no reason to think that peace is more likely under a left-wing government than a right-wing one; the left has just been better at making it look as if lack of progress is the Palestinians’ fault.

By our silence and inaction, we’ve created the megalomaniac that is Netanyahu and the monster that Israel is becoming. The solution? Stop doing what hasn’t worked. Instead, take international action to force Israel to comply with international law.

2 “The final moment before the liberal population leaves Israel,” September 16, 2012.