Has the Dutch voter, like the legendary Hans Brinker, saved us all by putting his finger in the dike to stop the wave of nationalist populism engulfing the Western world? A superficial glance at the results of the March 15 election for the Dutch lower house of parliament (Tweede Kamer) might suggest that. Whereas many polls and pundits had predicted that the Freedom Party (Partij voor de Vrijheid, PVV) led by Geert Wilders would gain close to 30 seats (out of 150) and become the largest party in parliament, in fact PVV obtained only 20 seats, much fewer than the Liberal Party (Volkspartij voor Vrijheid en Democratie, VVD) (see table 1). 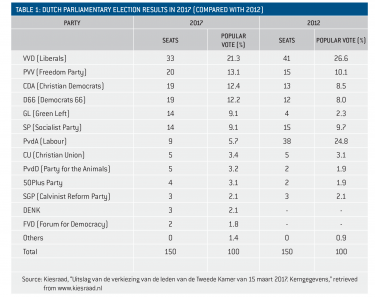 A closer look, however, reveals that the picture is rather more complicated. Parties at both ends of the nationalist-to-cosmopolitan spectrum did well in the election, at the expense of parties that either defended the status quo or took an ambiguous middle-of-the-road position on this spectrum. Nationalist parties sought to protect national identity and sovereignty, restrict immigration and strengthen national defence and security, whereas cosmopolitan parties worried more about climate change, solidarity with refugees, diversity, privacy and civil liberties. Nationalism isn’t necessarily combined with populism, but it can be, as in the case of the PVV.

Issues such as Dutch identity, immigration and integration dominated much of the campaign. According to the polls, citizens regarded these as the most important political problems at the end of 2016, though they were closely followed by health care, income and job security, and governance.1 If economic issues had gained priority, the outcome could have been quite different. After all, the Dutch economy was in better shape in March 2017 than at the time of the last election in 2012: the Gross Domestic Product was rising again, while unemployment and the public deficit were shrinking. Yet the two parties that had formed a coalition in 2012, the VVD and the Labour Party (Partij van de Arbeid, PvdA), and – against the expectations of many observers – had managed to resolve their conflicts and provide a stable and relatively effective government, both suffered serious losses.

The (rather conservative) VVD remained the largest party and lost fewer seats than expected, possibly because of the firm way its leader, Prime Minister Mark Rutte, handled the diplomatic conflict with the Turkish government in the weekend before the election. When a Turkish minister went to the Netherlands to persuade Dutch-Turkish citizens (who generally have double nationality) to vote Yes in Turkey’s constitutional referendum,2 she was ordered to leave the country immediately. Earlier in the campaign Rutte had published a moderately nationalistic declaration in national newspapers. He called on immigrants to adapt to Dutch values and to behave “normally,” thus likely stealing some thunder from Wilders. In its election platform, the VVD called for stricter immigration and integration policies, though it did not go as far as the PVV.

The PvdA paid a much higher price for its participation in government. Its drop from 38 to 9 seats was the largest electoral loss for any party in Dutch history since 1918. Its leader, Deputy Prime Minister Lodewijk Asscher, seemed to take a rather ambiguous position in the debate over Dutch identity and immigration. On the one hand he called for “progressive patriotism.” In 2014 he had criticized Dutch-Turkish associations for obstructing the integration of their members into Dutch society. As a result, two Dutch-Turkish members of parliament left the PvdA and founded a new party called DENK – which means “Think” in Dutch and “Equivalence” or “Equality” in Turkish. On the other hand, Asscher passionately defended multiculturalism in a final television debate with Wilders. In addition, the PvdA had disappointed its own electorate on some salient issues, agreeing to increased individual contributions to health care (“personal risk”) and introducing a law which was intended to promote job security but in fact had the opposite result of further increasing the precariat.

While the two governing parties suffered substantial losses, some but not all opposition parties benefited. In this regard we should note the failure of the Socialist Party (SP), which actually lost a seat, to woo voters from the PvdA, despite advocating a more comprehensive public health care system, more secure jobs, higher pensions and welfare and democratic reforms like binding referendums. Some observers blamed this poor result on the party’s leader, Emile Roemer, who was perceived as a friendly uncle lacking the aggressive “bite” of successful opposition leaders. Yet one could also point at the party’s middle-of-the-road position on the most important issues: national identity, integration and immigration. In the 1980s, when still a Marxist-Leninist party, the SP had warned against mass immigration, at the time a taboo in Dutch politics. Gradually, while shifting from Marxism-Leninism to democratic socialism with a populist touch, it became more liberal in this respect, perhaps confusing some of its potential voters. It also adopted a somewhat ambivalent attitude toward European integration.

As we can see in table 1, the large gains went to two decidedly, cosmopolitan parties, Democrats 66 (D66) and the Green Left (GroenLinks, GL). Both advocated more liberal immigration policies, as well as more European integration and a greener, more sustainable economy – even if the Green Left went further in this respect and relied more on government intervention. DENK, perhaps the most cosmopolitan party in its platform and the backgound of its list of candidates, won three seats in parliament. The Party for the Animals, which was founded to promote animal rights but emphasized cosmopolitan issues like climate change in its campaign, improved its standing from two to five seats.

Yet nationalist parties also made substantial gains. Even though it failed to live up to expectations, the populist PVV, which wanted to stop immigration, ban the Qur‘an and close all mosques, as well as leave the EU and introduce binding referendums, became the second largest party. It waged a fairly weak campaign. Wilders refused to take part in most television debates and did not appear often in public because of increased security threats. His persistent enthusiasm for Donald Trump might have cost him some votes too. Rumour had it that he received Russian aid, but there is no evidence for this at all. Nor is there evidence for direct American intervention, though Wilders has received American money. In recent years the David Horowitz Freedom Centre had donated something like €100,000 to the Friends of the PVV Foundation.

Moreover, a new populist party, Forum for Democracy (Forum voor Democratie), often regarded as “PVV lite,” entered parliament with two seats. And the Christian Democratic Party (Christen Democratisch Appel, CDA), which waged a rather nationalist campaign, was rewarded with six more seats. The Christian Democrats proposed to abolish dual nationality, restore conscription – to promote citizenship and respect for social norms and values – and teach the national anthem in all schools. Yet its nationalism remained traditionalist and unsympathetic to populism, even to the idea of popular sovereignty; Christian Democats opposed the use of referendums and the direct election of mayors and other public officials.

The two other Christian parties, the Christian Union (ChristenUnie, CU) and the Calvinist Reform Party (Staatkundig Gereformeerde Partij, SGP) neither won nor lost seats. Both appeal mainly to members of small Protestant denominations and not to secular voters. Finally, the senior citizens’ party 50Plus (50plus) managed to double its number of seats, avoiding the identity and immigration issues and simply insisting on higher pensions and a lower retirement age.

The Dutch party system is too complex and multidimensional to explain changes in terms of one factor or one dimension only. The 2017 election is no exception. The system has become even more fragmented than it had been since 2012, with the largest party obtaining only slightly more than 20 per cent of the popular vote and of the seats in the lower house of parliament.3 Socioeconomic issues, class cleavages and denominational differences as well as the personalities of the leaders all had some impact on the outcome of the election. However, the most important issue seems to have been national identity, integration and immigration. The parties that took a clear and consistent position one way or the other on this issue – and related issues like European integration and possibly also climate change – won seats at the expense of parties defending an ambiguous or middle-of-the-road position. As a result, the party system has become somewhat more polarized on this issue.

But in spite of their losses, middle-of-the-road parties have retained a pivotal position in parliament. The next government coalition will be neither nationalist nor cosmopolitan, but no doubt a bit of both; most likely it will be composed of VVD, CDA, D66 and either the Christian Union or the Green Left. Overall, nationalist populism has grown, even if not as much as expected. So no one should assume the matter resolved. If the dike hasn’t collapsed, there remain numerous weak spots. After all, Hans Brinker never existed.

3 The Netherlands has one of the purest proportional representation systems in the world; the seats are divided according to the popular vote across the country, which is effectively regarded as one constituency. 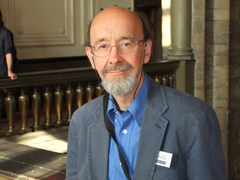 Paul lucardie was for many years head of the of the Documentation Center on Dutch Political Parties, at the University of Groningen, and has written extensively on Dutch politics and political extremism. Read More