In the movie Groundhog Day, Bill Murray is forced to live the same day over and over. He tries to break the loop by changing events; he even tries suicide. Nothing works: his next day is always his previous day.

Canadian foreign policy debates in the year 2014 look very much like Groundhog Day. Two conflicts – Israel-Palestine in Gaza and Russia-Ukraine – have raised much heat, many sharp words, vehement passions, but precious little light. Hanging over the debates is a pervasive sense of déja vu. Trapped in a time warp?

Russia-Ukraine is a good example. Following the coup that drove out the pro-Russian president, Vladimir Putin’s annexation of Crimea and barely covert Russian backing for violent pro-Russian separatists in the eastern part of the country quickly led to talk of a “new Cold War.” Putin was cast as the dictator Stalin menacing eastern Europe circa 1947–48, with the West being called on to revive the heroic spirit of the Marshall Plan and NATO. We in the West, it seemed, were blameless innocents confronted by Putin’s aggression and lust for domination. The failure of appeasement in the 1930s to stop Hitler had taught the West that dictators must always be confronted. 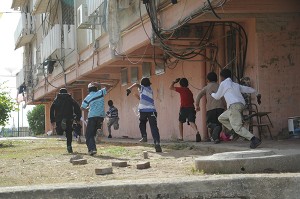 he problem with the screenplay for Cold War Two begins with its crude interpretation of Cold War One. In the late 1940s, it was seen as a simple case of Soviet Communist aggression and Western response. Stalin bore sole responsibility for starting the Cold War, and early Cold War history echoed this version of reality.

In the late 1960s and early 1970s, haunted by the spectre of the Vietnam debacle, revisionist schools began to appear that turned Cold War historiography on its head. Now it was the United States that was the villain, with the Communist world responding to imperialist aggression. Revisionism did point out flaws in the Western façade of innocence, and did cast light on the defensive elements in the Communist posture. But simply inverting the anti-Soviet model into an anti-American one was a misconceived, if not morally suspect, enterprise.

After the collapse of Soviet Communism, Cold War historiography has become more balanced and nuanced. Few would claim any more to find a smoking gun at the starting line. There were deep differences – systems, interests, goals – between the capitalist West and the Communist East that doomed postwar cooperation. There were also grave mistakes made in reading the intentions of the other side: what were primarily defensive moves by the East were misread as offensive actions by the West, and vice versa.

Fast forward: Ukraine 2014. Few lessons of this history have been learned. Spurred by a loud anti-Russian Ukrainian-Canadian community, politicians of all parties in Ottawa could see only Russian aggression. To be sure, Putin was making it easy: annexing Crimea and subverting Ukrainian sovereignty were red flags that demanded countermeasures.The decades-long nuclear standoff – the “balance of terror” – ironically proved a factor for international stability. It prevented East-West rivalry from degenerating into a third world war, for which the Cold War was a safer substitute. The one time when the balance was seriously threatened was the Cuban missile crisis, when the USSR attempted to counter U.S. missiles on its Turkish border with secret emplacement of Soviet missiles in Cuba. The doomsday clock was stopped at one minute to midnight when the Soviets withdrew their missiles and the Americans pulled theirs out of Turkey. Mutual recognition of fundamental interests, without surrendering fundamental values, prevented catastrophe. 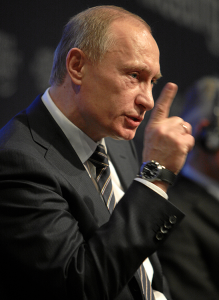 But were pro-Western Ukrainians the virtuous democrats depicted by their supporters in Parliament and the media? Not quite. First, they came to power by an uprising against an elected pro-Russian president. Yes, that president was corrupt. But so are virtually all Ukrainian politicians, pro- and anti-Russian. That some of the “democrats” were fascistic ultranationalist extremists was not simply Russian propaganda. Ukraine is divided, as it always has been, between western and eastern regions, Ukrainian and Russian speakers, pro-Western and pro-Russian sentiments. Proclaiming the supremacy of one side over the other is a very dangerous prescription for civil war, especially with thuggish militants on both sides.

Crimea is majority Russian-speaking and strongly pro-Russian, as Putin’s referendum clearly showed. It definitely is not an integral historical part of Ukraine. It was assigned to Ukraine as a gift from the Kremlin in the mid-1950s when everything was run from Moscow. Most importantly, Crimea is the site of Russia’s strategically crucial warm water naval base, one recognized internationally and by the Ukrainian Parliament. An independent Ukraine might well be better off without having to hold down territory that contains a largely hostile population and a major Russian military presence. But Crimea also illustrates a larger context for helping to explain, if not excuse, Russian behaviour.

With the fall of the Berlin Wall in 1989, the Soviets were reconciled to German reunification on the understanding that a NATO including a united Germany would represent no threat. What followed was a steady march of NATO eastward to include former Warsaw Pact states, along with the contemptuous, almost offhanded, rejection of a request by post-Soviet Russia itself to join NATO. The West seemed to be saying to Russia: we won the Cold War, so now we set the agenda in your region on our terms.

Tension escalated significantly with the threat of bringing Ukraine not only into the European Union but into NATO as well, thus providing NATO with a presence directly on the Russian border – and, prior to the annexation of Crimea, a presence on territory with a Russian military base. Putin’s Russia is not the weak, stumbling sick man of the Yeltsin era; it is a renascent power, but one highly sensitive to the decline of its position in the world, looking for respect, and serious about restoring its regional security. We in the West see Putin starting a fight and see resisting him as defensive, but Putin can see his actions as resisting provocation by the West. And so the downward spiral of mutual misunderstanding begins anew.

If Ukraine is the touchstone of a new Cold War between Russia and the West, it is well to recall the mistakes of the last war. Trying to see the world through the other side’s eyes is not weakness or disloyalty. It is a realistic way of appraising the other side’s actual intentions, not what our own anxieties and fears might conjure. The hawks who demanded rollback to liberate the captive nations behind the Iron Curtain would have brought on a world war. Patient containment of Communism paid off when the Soviet bloc eventually imploded under the weight of its own contradictions and failures.

The Israeli assault on Gaza offers another example of Parliament as an echo chamber rather than a debating forum. Further consolidating their already growing grip over the Jewish vote, which swings a number of seats in Toronto and Montreal, the Harper Conservatives grabbed the old playbook and automatically blamed Hamas for starting hostilities (as if almost 50 years of Israeli occupation and settlement of Palestinian land were without consequence).

The mantra that “Israel has the right to defend itself” became, in the mouths of ministers, opposition MPs and media commentators, a fiat shutting down debate. Self-defence is a legitimate claim only when exercised with reasonable proportionality, and could hardly be invoked when the civilian casualty ratio is hundreds to one in favour of Israel. One did not have to be “anti-Israeli” to insist that blatantly prejudicial arguments granting Israel a perpetual get-out-of-jail-free card for any of its actions, however disproportionate, should be subjected to critical scrutiny. Yet Foreign Minister John Baird characterized any criticism of Israel as equivalent to support for the heinous terrorism of Hamas, if not evidence of anti-Semitism.

To their discredit, the opposition parties acquiesced in this. Indeed, Tom Mulcair exercised a gag order on the NDP caucus to silence criticism of Israeli policy. The notorious George W. Bush formulation “You’re either with us or with the terrorists” was alive and well in Ottawa. Groundhog Day.

Common factors in both Ukraine and Gaza are: (1) a foreign antagonist who can be easily demonized and dehumanized; (2) a strong domestic political support base for a hard line; (3) a historical template for action readily at hand. If some of these conditions do not hold, the outcome can still be open. The decision to send CF-18s into Iraq in the struggle against the newly discovered threat of the Islamic State did not gain all-party consensus, with the NDP and Liberals both opposed. In this case, even though the Islamic State has been widely characterized as “pure evil,” condition (2) was unclear. As for condition (3), the historical templates of recent interventions in Iraq and Afghanistan were less than encouraging. Even if the vote was a foregone conclusion, at least the issues were aired from more than one side.

In Groundhog Day, Bill Murray finally gets it right and breaks the loop. When actual debate breaks out in Parliament on an issue of war and peace, perhaps there is hope in Ottawa too.

Reg Whitaker is a political columnist for Inroads and a member of its editorial board. He lives in Victoria, B.C.