At the time of writing, the short list of five novels for the 2017 Giller Prize has just been announced. Eden Robinson’s latest novel made the cut.

By coincidence, the novel I read just before Son of a Trickster was Salman Rushdie’s Midnight’s Children. (I know, I should have read Rushdie’s masterpiece long ago, but I didn’t.) I mention this trivial coincidence because Rushdie and Robinson both employ magic realism as means to enhance scathing critiques of their respective societies – South Asia from the 1940s to 1970s, northern British Columbia today.

In Rushdie’s tale, the central character, Saleem, is born at midnight on the day of India and Pakistan’s independence. Children born within an hour of independence possess magical powers. Saleem’s powers consist of being able to discern exactly what is in the minds of others. In a first-person narrative, we follow both Saleem’s domestic life and the country’s major political events with the aid of his magically enhanced insights.

The central character in Robinson’s tale, Jared, is an Indigenous teenager living with his divorced mother in Kitimat. It turns out that Jared is not the son of his supposed father; he is one of many sons of Wee’git, a trickster. Wee’git appears in the novel several times, first as a stranger on a bus who sits beside Jared, reveals the secret of his paternity and tells Jared that he has survived even though “your mother shot me in the head.” Wee’git later appears as a raven inviting Jared to join him as a trickster and escape the torments of evil spirits. Jared’s mother, it turns out, is a witch with magical powers of her own. She is also a heavy drug user.

The novel benefited from publicity surrounding a melodrama at the Walrus, whose fiction editor invited Robinson to publish a chapter in the magazine. Other editors insisted that she ease up on the use of profanity. After several iterations, Robinson withdrew the chapter, accusing the Walrus of censorship. The fiction editor resigned in support. 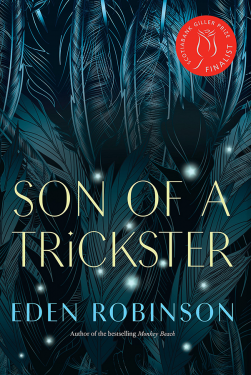 There is certainly lots of bad language and violence in the novel. In an early chapter, Richie, a drug dealer, insists that Jared’s mother repay the drug debts of an ex-boyfriend. Richie makes his demand in a note tacked to the front door of their home with a knife. When she finds it, she comments to Jared, “Some fucktard sure laid a monster hex on us.” She does not pay. Shortly thereafter, “with a big shit-eating grin,” Richie looses his two pitbulls on Jared. Before they can maul him, his mother turns up in her truck:

The dog bounced off the grille … His mom turned to look behind her, backed up a few feet and then calmly shifted gears again and squashed the pit bull under the front passenger tire … As her tires spun, blood sprayed the snow and steamed in clots. His mom rolled down the driver’s window. “Kindly leave my boy alone … Sorry ’bout your dog.”

Despite this incident, Richie becomes her lover, and moves into the house. Apparently, this was too much for the Walrus.

Jared lives in the basement; his mother and her drug-dealing boyfriend live upstairs. Following in Richie’s footsteps, Jared exploits his one marketable skill: he cooks and sells weed-laced cookies to fellow high school students. He uses much of this income to aid his supposed father, hospitalized with a back injury. Jared pays the rent for the apartment shared by his supposed father, his supposed father’s girlfriend and her pregnant daughter Destiny.

When her baby is born, Destiny tries, unsuccessfully, to seduce Jared into becoming the adoptive father. Instead, Jared falls in love with Sarah, a Native girl who comes to live next door, who attends Jared’s high school and who acts as nurse to her dying grandparents. Sarah is tormented by her own spiritual demons, repeatedly cuts herself and ultimately tries to commit suicide. She is removed from the story in an ambulance. Thereafter, Jared smokes pot and declines into alcoholism.

From this plot summary, you may conclude that this is a misérabiliste melodrama suffused in drugs and alcohol. That would be a mistake. It is a good novel written in the tradition of roman noir mysteries, with much sharp dialogue, sex and dark humour. There is a little too much Raymond Chandler for my taste.

A good novel is about individuals. The author may have an ulterior motive – in Robinson’s case, to oblige readers to understand the scale of obstacles that prevent Natives in her world of northern B.C. from realizing a satisfactory life – but if she allows the motive to substitute for depicting psychological realities as perceived by the principal characters, the novel fails and becomes a didactic tract. Son of Trickster is not a didactic tract. It has its limits, however: it does not adequately flesh out characters other than Jared. We never learn what motivates Richie, or why Jared’s mother had an affair with Wee’git and shot him, or why Sarah ultimately tries to commit suicide.

But despite its limits, it is a very good novel. Robinson enables us to understand why a Native teenager in Kitimat might well drop out of school, smoke pot all day and become an alcoholic – without invoking racism among white teachers or students, residential schools or other sins of the settler society. Use of magic realism helps show the power of Native traditions, among urban Natives as much as among those living on-reserve, but Robinson does not propose traditional beliefs as a solution to her characters’ problems. Traditional stories may provide wisdom, but in Robinson’s telling these stories primarily evoke scenes of chaos: for example, carnivorous otters able to transform themselves into human form. Jared rejects Wee’git’s invitation to join him; he opts to continue living with his mother, whose philosophy is simple: life is tough and only the tough survive.

Nor does learning about colonialism, residential schools and patriarchy help much. Sarah is smart and has read all about these ideas, but they do not enable her to thrive. She too escapes reality by extensive use of drugs, and ultimately succumbs to depression.

In the final chapter Robinson offers a glimmer of hope – Jared joins an Alcoholics Anonymous group. But this is a glimmer, not a didactic agenda.