On a third hand, suburban greens will tell you that the world is ending, but that they don’t want any windmills, solar farms or high-speed rail lines in their backyards.

On a fourth hand, most of today’s leaders will tell you that the world is ending, so at Glasgow they’ve all decided to go out on a limb and commit their successors’ successor to deliver emissions-free electricity by 2030, 2040 or 2050 – any date that doesn’t require them to ask their citizens to do anything painful today.

This is not serious – not when you’re talking about reversing all the ways that we have destabilized Earth’s systems, from ice caps and ocean currents to coral reefs and tropical forests to the density of carbon dioxide in the atmosphere. This is pretend.

Serious was how we responded to Covid-19, when it really did feel like the world economy was ending: We fought back with the only tools we have that are as big and powerful as Mother Nature – Father Profit and New Tech.

Friedman succinctly makes an argument with which I strongly agree. With exceptions, the political leaders speaking at the Glasgow UN Conference of the Parties (COP26) were not “serious.” Perhaps the most ominous evidence of a lack of seriousness is paragraph 36 of the Glasgow Climate Pact:

36. (The Conference of the Parties) Calls upon Parties to accelerate the development, deployment and dissemination of technologies, and the adoption of policies, to transition towards low-emission energy systems, including by rapidly scaling up the deployment of clean power generation and energy efficiency measures, including accelerating efforts towards the phase-out phase-down of unabated coal power and inefficient fossil fuel subsidies, recognizing the need for support towards a just transition.²

Optimists note that this is the first mention in a COP statement of eliminating use of coal to generate electricity; realists note that, at the last minute, India and China amended the text by substituting “phase-down” for “phase-out.”

Whatever the interpretation, paragraph 36 is not “serious” in Friedman’s terms. His implicit definition of serious is that politicians invest their political capital in launching programs that (1) are undertaken now, as opposed to being scheduled to ramp up over time or come into effect in future decades, and (2) have the potential to make a major impact in lowering greenhouse gas (GHG) emissions. Where should we start?

The first scenario requires that innovations can simultaneously reduce energy demand and increase living standards, especially in the global South. A downsized energy system enables rapid decarbonization of energy supply. Afforestation is the only carbon dioxide removal option considered. There is no need for either fossil fuels with carbon capture and storage or bioenergy.

This scenario implies that social as well as technological development follows historical patterns. In other words, final energy demand continues to grow. Central to this pathway is that we support universal acceptance of nuclear power. The scenario projects a fivefold increase in use of nuclear, a ninefold increase in nonbiomass renewables and a sevenfold increase in carbon capture and storage plus bioenergy. (At present, adding carbon capture from fossil fuel power generation roughly doubles the cost per kilowatt-hour).

A resource- and energy-intensive scenario in which economic growth and globalization lead to widespread adoption of greenhouse gas–intensive lifestyles, including high demand for transportation fuels and livestock products. Emissions reductions are mainly achieved through technological means. We need faith in new technology removing carbon dioxide from the atmosphere, faith in carbon capture and storage and faith in bioenergy fuels.

a Summary of pathways defined in Intergovernmental Panel on Climate Change, Summary for Policymakers of IPCC Special Report on Global Warming of 1.5℃ Approved by Governments (Geneva, Switzerland: Author, 2018), p. 14.

Each of these pathways requires policies that, at present, are highly unpopular in high-income countries or depends on technological innovation that may or may not materialize. Pathway 1 requires reduced world energy demand, a massive increase in forest cover and emphasis on increased living standards in the global South. Pathway 2 requires high levels of international cooperation, lower energy intensity and a major shift in diets from meat to plant-based protein. Pathway 3 assumes extrapolation of historical trends in energy use. Central to this pathway is a massive increase in the share of energy derived from nuclear power as well as an increase in nonbiomass renewables and in carbon capture and storage. The fourth requires optimistic trends in technology for CO2 removal from the atmosphere and faith in carbon capture and storage.

The value of the pathways is to illustrate what “serious” means. My choice is Pathway 3. The case for it is that the majority in all countries – developing or high-income – will never agree to “phase out” or even “phase down” fossil fuel energy without a reasonable substitute. Pathway 1 requires Brazil, Indonesia, countries in tropical Africa and Russia, among others, to halt illegal logging and find ways to expand forest cover. It also requires that the global North reduce energy demand and leave room for the global South to increase its energy demand and the contingent GHG emissions. All good ideas, but they require Scandinavian quality of governance. Pathway 2 requires that the world abandon meat, especially red meat. Good luck in persuading the majority across the world to become vegetarians, or perhaps eat chicken along with vegetables, fruit and pulses. (No fish! Substituting fish for meat accentuates the pressure on world fish stocks.) The IPCC is dubious about realization of the technological innovations required by Pathway 4.

As with the other pathways, Pathway 3 poses obstacles. Relative to 2010, it assumes a doubling of nuclear power capacity by 2030 and a fivefold increase by 2050. What about disposal of spent fuel? What about more Fukushimas? What about the history of cost overruns on ex ante construction cost estimates? An obscure white paper answers these questions adequately. The good news about this pathway is the consensus among engineers that (relatively) small modular reactors (SMRs) are much safer than large earlier designs. Furthermore, engineers expect that use of standardized modular components will enable lower construction costs per megawatt capacity than earlier designs for much larger reactors.

In 2018, a committee composed of a half dozen Canadian power companies as voting members and Natural Resources Canada as a nonvoting member published a white paper on the potential to construct multiple SMRs.³ While the white paper addresses the technical questions, it does not address the major problem: public opinion in most high-income countries, including Canada, is opposed to expansion of nuclear power. One recent Canadian survey found overwhelming support for substituting renewable and “clean” energy for fossil fuel–based energy, but only 21 per cent were prepared to endorse nuclear as a clean energy option.⁴

Despite public attitudes, nuclear is making a comeback among some of the world’s “deep thinkers.” The well-respected Union of Concerned Scientists (UCS) publishes carefully researched reports on numerous U.S. policy issues. In 2018, UCS published a monograph advocating expanded investment in U.S. nuclear power capacity.⁵ In its November 13 issue, The Economist published an editorial and two articles on the potential of nuclear power in reducing greenhouse gases associated with power generation. All three are positive. Bill Gates has decided to put serious money behind his pronuclear advocacy and is investing half the cost of a $4 billion modular nuclear reactor to replace a coal-fired plant in a Wyoming coal town. (The U.S. government is paying the other half.) Gates is partnering with Warren Buffett on other nuclear projects.⁶ 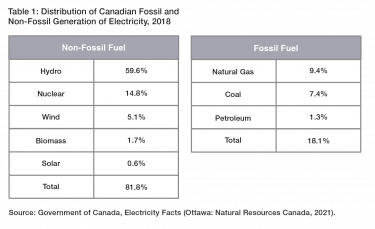 And in Canada? The white paper mentioned above and a more recent “action plan” are not on the Natural Resources Canada website.⁷ Nominal action plan supporters include six provinces and territories (Alberta, Saskatchewan, Ontario, PEI, New Brunswick, Yukon – but not British Columbia or Quebec), major provincial power companies in supportive provinces, a few universities (not including my university, Simon Fraser), several Indigenous organizations and municipalities, civil society groups, industry associations, heavy industry (e.g., Suncor), engineering firms and would-be SMR vendors (e.g., CANDU). You are forgiven if you have not heard of this “action plan.” It is probably the least visible climate change policy initiative developed in Ottawa.

Neither Natural Resources Minister Jonathan Wilkinson nor Environment Minister Steven Guilbeault is likely to ask my opinion on how to activate the SMR “action plan” – and change public opinion. However, I would be delighted to forgo my consulting fees if one or both want advice. Here are a few strategic arguments: 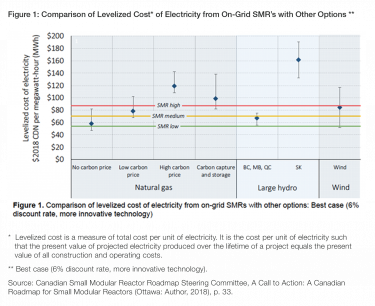 Pursuing serious climate change policy inevitably exposes a country to potentially losing out in some future unpredictable collective coordination game. I have sketched the potential of Canada promoting the IPCC’s Pathway 3. I acknowledge the risk. Others may prefer to sketch out one of the other IPCC pathways – or invent an altogether new pathway. Whatever the option, if serious, it will entail significant financial and political investments now, with uncertain future benefits.

For more from our Inroads 50 feature on climate change, click to read A Carbon Tax that Pays the Cost of Climate Change, by Marvin Shaffer and John Richards.

⁴ “When Canadians were asked to pick their top three climate solutions, renewables and adoption of cleaner energy technologies by industry came first and second, at 57 and 48% (in a survey). Nuclear placed second-last in a field of nine options, with 21% support” (Nuclear Industry Survey Shows 86% Public Support for Federal Investment in Clean Energy, The Energy Mix, September 4, 2020).

8 In 2017, there was approximately 35,000 megawatts of fossil fuel generating capacity in Canada. Nuclear replacement would require one hundred 350-megawatt SMRs (calculations based on Statistics Canada, Installed Plants, Annual Generating Capacity by Type of Electricity Generation, Table 25-10-0022-01 .