In July of last year, I was in Vancouver with my grandchildren. We went to eat in Chinatown, which borders a part of the city known as the Downtown Eastside. It was a beautiful, cool afternoon. In a fairly small area, there were hundreds of people standing around talking and dozens more sleeping on the sidewalks. It looked like Vancouver just stopped – and something else began. For the next week, my grandchildren, aged 10 and 12 (who live in Thunder Bay and are no strangers to urban decay) asked questions about the people they had seen.

The Downtown Eastside has been a famous hellhole for years, and next year’s Winter Olympics is giving it much-deserved publicity. A recent example is the multipart series in the Globe and Mail in February and March, according to which the area has a population of about 6,000 (14 per cent are Aboriginal) and has the highest concentrations of poverty, homelessness, drug addiction, poor housing, prostitution, petty crime and mental illness in the country. 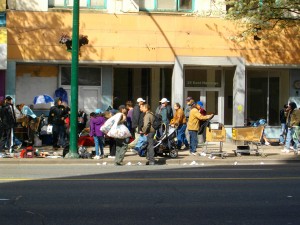 A great deal of money has been spent there, and it’s home to more social services than you can shake a stick at, but few think it’s getting better. Jenny Kwan, the cabinet minister who led the then NDP government’s efforts to improve conditions in the Downtown Eastside, said after a recent visit, “I have never seen such desperation on the streets. I walk down there in the early hours … and I am literally stepping over bodies” (Globe and Mail, February 14).

With all the attention it gets, you would expect there to be some coherent plans to clean up the area. If they exist, I haven’t found them.

Globe and Mail B.C. columnist Gary Mason warns that “fixing the ultimately means engaging in some kind of showdown with the collection of social agencies, poverty groups, activists of all stripes who have consistently opposed changes that upset the status quo,” and who have sold us “the specious notion that any attempt to dilute the neighbourhood of its concentration of poor, addicted and mentally ill is an attack on the most vulnerable” (Globe and Mail, February 14).

Mason is likely talking about people like Jim Green, community organizer and one-time NDP mayoralty candidate, and Margo Fryer, founder of a UBC program that operates a storefront learning centre in the Downtown Eastside. ”I really don’t like the word ‘fix,’” says Green (Globe and Mail, March 2). He probably wouldn’t like “clean up,” “dilute” or “normalize” any better.

Green also says that “there needs to be a democratic … grassroots voice” for the people who live there. Fryer, who admits that “the status quo is not acceptable,” also looks to grassroots democracy: “We have to … look for ways in which the community and its citizens can contribute their ideas and talent to the development of the neighbourhood” (Globe and Mail, March 9).

The area figured prominently in Gregor Robertson’s mayoralty campaign. Interviewed on CBC radio’s Q on March 26, Vancouver’s new mayor talked about the Downtown Eastside as an example of the city’s diversity.

I would have expected Vancouver’s police department to be tougher and more concrete. Its recent “discussion document,” Project Lockstep (February 4), comes right out and recommends centralizing poverty services under a “Director for the Most Vulnerable” – but it’s all about helping individuals, not cleaning up the area. The subtitle says it all: “A united effort to save lives in the Downtown Eastside.”

Gary Mason is sceptical about the police department’s call for centralization, wondering whether there is “anyone out there with the kind of fortitude and royal jelly it would take to pull off change.” But he mentions no specific measures to dilute the area – which leaves the imagination to run wild: water? immigrants? machine guns?

In fact, the whole of the Globe and Mail series contains not a single word about how one might fix, clean up or dilute the Downtown Eastside, except by treating the individuals who live there – that is, getting them decent housing, or more welfare, or better counselling. The theory seems to be that when enough of its residents are rehabilitated, many will vacation in Hawaii and France and the Downtown Eastside will become a neighbourhood like any other.

Let’s say it clearly: you cannot clean up the Downtown Eastside by treating the people who live there. It’s like trying to empty the ocean one cup at a time. The water runs back in.

It’s also a bad place to treat people. Everyone knows that alcoholics who want to stop drinking have to stop hanging out with crowds of heavy drinkers. The Downtown Eastside is a massive, nonstop street party for drug users of all kinds. Its residents don’t go to raves – they live in one.

There are two ways to clean up the Downtown Eastside.

The first is to legalize and regulate the sale of drugs – as The Economist has recommended yet again in its March 7 cover story. People wouldn’t have to steal or sell sex to come up with the money it takes to keep themselves drugged. Most drug addicts can hold down jobs – just like alcoholics. Alcoholics need their drink, but they don’t have to spend the whole day looking for it.

An added bonus! Legalize the sale of drugs and most of Vancouver’s gang problem disappears in a flash. In the whole of the Globe and Mail series there is not a word about legalizing drugs.

The second way is to stop rewarding people for living in the Downtown Eastside and start rewarding them for leaving. Consider the incentives for staying: a large and supportive peer group, drug dealers on every corner and, of course, social services from subsidized housing to soup kitchens to safe injection sites.

We should learn from the experiences of other cities. (See, for example, “Where have all the homeless gone?”, The Economist, August 14, 2004.) But there are, I would suggest, things unique to the Downtown Eastside that will require direct measures to encourage people to leave. A few suggestions:

Contrary to Mason’s warning about “social agencies, poverty groups, activists of all stripes,” the big showdown will be with ordinary people united under that old revolutionary slogan, “Not in my backyard!” People can always be counted on to discover that the neighbourhood they live in is particularly unsuited to a shelter or treatment centre. As a result, new services go to neighbourhoods where community organizations are weak. The flip side of NIMBY is the increased concentration of the poor, the addicted and the mentally ill in particular urban areas.

So if the Downtown Eastside is to be fixed, Vancouver’s various neighbourhoods will have to be bribed or forced to accept residential treatment centres and other programs.

I lived in downtown Ottawa for many years. The beginnings of a Downtown Eastside can be seen in Ottawa, at the intersection of Murray and King Edward streets. Conveniently, it is on the east side of downtown.