Tom Flanagan’s review of Alan Cairns’s book Citizens Plus: Aboriginal Peoples and the Canadian State (Vancouver: UBC Press, 2000) appeared as part of an exchange with Professor Cairns in Inroads 10 (2001).

In 2001, Inroads hosted an exchange between Alan Cairns and me. It was a timely debate because my book First Nations? Second Thoughts had just won the Donner Prize for the best book of the year on Canadian public policy, while Alan’s book Citizens Plus: Aboriginal Peoples and the Canadian State had been runner-up. In the Inroads feature, Alan and I commented on each other’s books and then replied to each other’s comments. 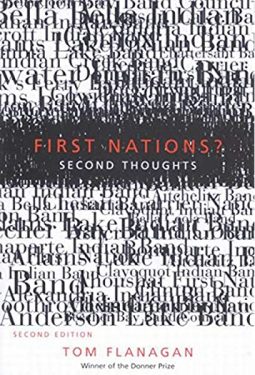 Now the editors of Inroads, as part of their 50th issue, have asked me to revisit my review of Citizens Plus, to see if I would still stand by the critique I offered 20 years ago. I am sure they would have asked Alan to do the same for his critique of First Nations? Second Thoughts but, sadly, he passed away in 2018. His presence is missed by many of us in Canadian political science, who profited from his pioneering research in electoral systems, the Charter of Rights and Freedoms and other subjects, especially Indigenous politics. Requiescat in pace.

Alan and I were both critical of the more extreme version of Indigenous nationalism, which holds that members of First Nations are not really Canadians – that First Nations are nations in the international sense and should carry out “nation to nation” transactions with Canada. Canadian politicians often talk this talk, but they don’t really mean it and don’t seem to understand the implications. I tend to see this kind of Indigenous nationalism as a threat to the territorial integrity of Canada, whereas Alan emphasized its potential threat to the well-being of Indigenous people themselves in destroying the sympathy of other Canadians for their cause. But even if we emphasized different aspects of the issue, our views were much the same.

Where we differed in 2001 was over the word plus in Alan’s phrase citizens plus, going back to the 1966 Hawthorn Commission, on which he had served. In my review of Citizens Plus, I said that Alan was proposing a form of affirmative action, which would have many adverse unintended consequences, as analyzed by the American economist Thomas Sowell. I argued that Indigenous people were now largely assimilated in the sense that they wore the same clothes, ate the same foods, attended the same schools, worked at the same jobs and enjoyed the same entertainments as other Canadians. Of course, they should be free to cultivate the own identity as do other Canadian religious and ethnic groups, but it should not be the role of the state to undergird that identity legally and financially.

I may have won the Donner Prize, but Alan won the argument, at least in the long-term political sense. Two decades after our exchange, it is clear that Canadians support the separateness of Indigenous people and are willing to pay substantial sums to maintain it. Under the watchword of “reconciliation,” the Liberal government of Justin Trudeau has more than doubled Indigenous program spending in the six years between Budget 2015 and Budget 2021. The government rushes to settle class actions that pay out billions of dollars in compensation for alleged past wrongs. Trudeau has repeatedly said that reconciliation is his highest priority, even if he would rather go surfing. Whether or not the views expressed in First Nations? Second Thoughts and in my critique of Citizens Plus had any merit, it is clear that Canada now has an expensive and legally entrenched special status for Indigenous peoples and will have it long into the future.

I was busy with Canadian electoral politics until 2006, but when I afterwards returned to the study of Indigenous issues, I could see which way the wind was blowing. I decided that there was no point in further argument about “citizens plus” because it was here to stay. But I thought it might be useful to research how the system could be made to work as well as possible for Indigenous people, on the assumption that Indigenous success would also benefit other Canadians.

The first result of my new research direction was the 2010 book Beyond the Indian Act: Restoring Aboriginal Property Rights with Christopher Alcantara and André Le Dressay (and Manny Jules as a silent partner). After surveying the tableau of Aboriginal property rights past and present, we argued for the introduction of fee-simple ownership for individuals on an optional basis for First Nations that wanted to go in that direction. The Harper government drafted the necessary legislation and was ready to introduce it in Parliament, but then got cold feet when the Idle No More movement arose, so it never happened. 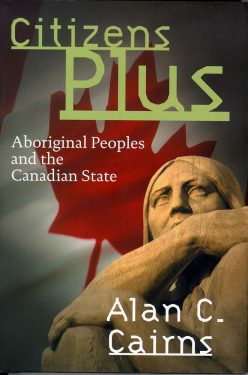 After that debacle, I decided I was through trying to give advice that nobody seemed to want. Instead, I set out to use the tools of social science to study what the more prosperous First Nations have done to achieve their prosperity. Using the (admittedly imperfect) Community Well-Being Index (CWB) as a measuring stick, I looked for variables associated with higher CWB scores. The correlates turned out to include economic and political factors such as having stable leadership, earning income through business activity, keeping the band government out of debt, facilitating the use of certificates of possession where they exist, levying property tax, entering thew First Nations Land Management regime, avoiding extravagant salaries for band councillors and negotiating self-government agreements. No First Nation has all of these characteristics, but those with higher CWB scores tend to have more of them. The findings are summarized in my 2019 book The Wealth of First Nations (I cribbed the title indirectly from Adam Smith through the mediation of the American economist Terry Anderson, author of The Wealth of Indian Nations).

In a few cases, such as the Westbank First Nation, prosperity is based on the commercialization of individually owned certificates of possession, but “community capitalism” – the exploitation of band land and other communally owned assets – is much more common. In general, I believe that government and business should be kept as far apart as possible, but I have come to think that community capitalism is the most realistic option for most First Nations, whose small populations mean they will have a limited supply of talented leaders in either business or politics. The partially visible hand of community capitalism may not meet all the norms of free-market theory, but it is better than the dead hand of federal bureaucracy.

So far, community capitalism has been most successful for First Nations located near towns or cities. It is much harder for First Nations in remote locations to make economic progress unless they happen to be situated near resource projects involving forestry, mining or hydrocarbons. Federal and provincial governments can help create conditions for more First Nations to profit from community capitalism by building roads, railways and harbours, and by encouraging rather than discouraging natural-resource development.

I have no illusion that community capitalism is a solution for all the problems facing First Nation people. It does little for those who live off-reserve – now half of the First Nation population – unless they have jobs or close relatives on-reserve. There may also be First Nations whose location is so unfavourable – so far from towns or resource plays – that they just can’t make headway in Canada’s market economy. But the data show community capitalism is working well for some bands, and I believe it could adopted by others. In an imperfect world, that’s a pretty good definition of success. And the great thing about First Nations’ community capitalism is that it has not been imposed from outside. It is the result of First Nations’ own desire and actions to improve their standard of living. Thus I see my most recent research not as trying to tell First Nations how to succeed, but as chronicling the success of some so that others can go down that path if they wish.

Tom Flanagan is Professor Emeritus of Political Science at the University of Calgary and a former Conservative campaign manager. Read More