We live in an age where one of the goals of modern functioning governments is to use evidence to ensure that society is at its best and taxes are responsibly spent. Simultaneously, we live in a society where policy decisions don’t actually consider the evidence on a regular basis. This leads to both continued inequality and lost opportunity.

If that seems a bit esoteric, consider these examples:

This is a short list – I could fill a book with other examples. That society is harmed when the evidence isn’t followed is beyond dispute. So why, in so many cases, is the evidence not followed?

Why this doesn’t happen and how it can have major implications is currently unfolding in real time with Canada’s COVID-19 response. Processes that previously took decades are playing out in weeks. As a result, we can isolate some of the structural issues that were previously evident only to those inside the system who could observe moments that occurred over years. Our policy process manifested some striking early failures: underestimating asymptomatic spread, ignoring rapid shifts in epicentres and failing to adequately assess the risk to Canadians.

COVID-19 caught many by surprise – millions of Canadians were not prepared for the lockdown that occurred. Hospitals lacked personal protective equipment (PPE), tests were not available in sufficient numbers and initial actions lagged behind the severity and trajectory of the illness. Given that we went from not having heard of this illness to lockdowns within two and a half months, Canada was far from being the only country where the response lagged. Yet mediocrity should never be our policy goal, and Canada was most definitely not a leader in national-level response.

We know from the documents that were handed over to the House of Commons committee that we failed to capitalize on emerging evidence. By mid-February, we knew that the virus had spread at an aggressive rate through the Diamond Princess cruise ship. By the next week, the World Health Organization had released a fact-finding report from China that highlighted key considerations and stressed the need for speed and decisive actions. Yet even with the scientific evidence rolling in, and real-time case counts such as Worldometer, we failed to take the necessary steps as a country.

For weeks after this, the Public Health Agency of Canada publicly stated that the risk to Canadians was low and that only those who had been to China’s Hubei province needed to be tested and self-isolate. To some extent we were protected from this federal failure to act by federalism – we knew that our cases had shifted to travel from Iran, the United States and Europe only because public health officers in provinces such as British Columbia, Ontario and Alberta did not follow the federal case definition, but instead tested using broader criteria along with surveillance tracing. 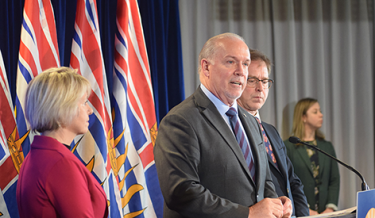 The general public had access to this evidence: in the first global pandemic in an internet-powered world, scientific articles and real-time case trackers were available. Yet public health data lagged behind. Even once the country jumped into action in mid-March, tests were not being approved, advice on asymptomatic spread wasn’t consistent with the evidence and PPE was lacking. Ontario saw reporting challenges where local numbers and provincial numbers were inconsistent because of flaws in the data collection system.

While other countries were innovating and adapting, at the federal level we lacked the cutting-edge push to respond to the evidence that this was an event unlike any in our lifetimes. We waited until people were dying to start the preparation process that should have been carried out in January. We also changed the international travel advice in a matter of days: people who had diligently checked a week earlier would have found no advice that travel posed an unusual risk. And while some provinces forged ahead, certain parts of the response such as travel warnings, border procedures, test approvals and large-scale acquisition of PPE needed to happen federally.

While there may well be blame when this is over, it is also likely that most of the individuals involved – politicians, bureaucrats, doctors and administrators – were doing their best. It was the system that was not at its best. The reasons apply to almost all evidence-based policy problems we face, so COVID-19 allows us to illustrate those and start contemplating how we change when this is over.

Talk about a deadly “once in a century” pandemic has been circulating in health and policy circles for years. Even with miraculous medical advances, novel viruses will emerge and some, such as COVID-19, will be highly contagious and deadly. Our Chief Public Health Officer, Dr. Theresa Tam, was in fact an author of a plan for the government of Canada regarding how the country should spring into action when there is a threat of a pandemic (hint: we didn’t follow it). After the 2003 SARS outbreak there was a reaction phase where PPE was stockpiled, but those stockpiles were not managed and many items in them had expired.

So even though the evidence base strongly suggested the need to be ready for an event that would happen in the future, this was not taken seriously. This illustrates one of the first challenges to evidence-based policy: policy problems are seldom aligned with election cycles. Evidence suggesting that you should spend now to prevent something later is often overlooked. Decision-making cycles, for the bureaucrats and the politicians they support, are focused on demonstrating impact in the short term, not preventing problems in the long term.

The second problem that emerged clearly in the pandemic is the fact that decision-makers are often shielded from key information. If ministers are just given a copy-and-pasted line about the risk to Canadians being low, they cannot make informed decisions on what stands before them. The tendency for notes to be generic and watered down is a product of the bureaucratic process. The drafter of a note often only has under an hour, with an expectation of perfection. Then, up to eight people review and edit the document, often with less situational awareness and expertise. What comes out the other side tends to be not that useful to the person receiving it. There is a lot of boilerplate information and not a lot of synthesized emerging evidence.

The obsession with perfect notes means most of the subject-matter experts don’t ever actually get to communicate to the decision-makers what they consider most important. Instead, their input is filtered through senior managers who often take a risk-averse approach, editing for what they think the politician wants to hear, not what the evidence suggests. In New Brunswick, this was concerning enough that the political side went about gathering the evidence themselves and sharing it with the bureaucracy – an illustration of a fundamental failure of the system.

Missing were the kind of documents referred to in security contexts as situational reports, daily digests of the evolving evidence. A situational report is meant to be timely and concise and contain the important details. It can quickly highlight key changes in a rapidly evolving situation, ensuring that everyone involved has a similar understanding of where things stand.

The third problem is that the trifecta of privacy/procurement/security has kept the government in a state where it cannot actually use all of the data tools available. An exponentially growing global virus with unprecedented research capacity thrown at it can only be understood with big data tools and real-time data updates. This led to various situations where the briefings given by public health officials contained information that conflicted with what was available publicly – and the public information turned out to be right.

That our officials were functioning on a delay became painfully evident, even as we all knew speed was of the essence. Updating websites once a week or with a few days’ delay is not acceptable in this age – nor is it necessary to go manually through data inputs as everyone outside of government can develop and use real-time tools. Security, privacy and appropriate procurement are all of the utmost importance, but they can’t stand in the way of solutions that prevent people from dying. This is true not just in this crisis but across issues.

Finally, our government structure itself is not built for evidence-based policy. Bureaucratic reform has mostly just turned a system that came out of the 1880s into a Frankenstein monster. Our departmental structures, hierarchies, decision-making trees and work flows just don’t work in the internet world. While we frequently hear the phrase “whole-of-government,” what that tends to mean is more edits of documents, more lost time, more stress and no clear outcomes. The current method allows for some disaster checks and a fair amount of wordsmithing, but not for multifaceted evidence bases to see the light of day. The effects of this weakness could be seen in Canada’s haphazard response to this crisis. If we had no border limitations, why did we not have other checks and precautions in place? How did we go from hardly any travel warnings to everyone needing to come home immediately?

If we actually want to be able to build evidence-based solutions, we need a reorganization of government, especially on the policy side so that everyone essential to building the evidence base can be pulled together onto one team. Proper government organization could have allowed rapid collaboration in responding to the pandemic. It would also make a difference on issues ranging from child care and domestic violence to climate change and international trade strategies.

This crisis has laid bare what most bureaucrats know: we are not built for proactive adaptation to the evidence base. We have seen some rays of light – from British Columbia, with a strong public health officer, strong collaboration between the health bureaucracy and the politicians and rapid gathering of evidence, to New Brunswick, where the kick from the political side started the discussion by pulling together the evidence when there was concern that federal direction was lacking. At the same time there are numerous danger signs: from the rising acceptance of conspiracy theories and antivax propaganda that encourages citizens to actively distrust the evidence base to missteps in the reopening phase where areas with high caseloads are making choices based on pressure rather than science. I hope the post-mortem doesn’t just focus on pandemic response but takes a more holistic look at government structures for problem solving.

Julia Smith holds degrees in law and in immigration and settlement studies and has worked on immigration issues in Canada, Ghana and Egypt. Originally from Nova Scotia, she lives in Ottawa, where she works... Read More