The essence of journalism, according to the time-honoured formula, consists of the five Ws: who, what, when, where, why. This section on education focuses especially on two of those Ws. Who is being educated (with its converse, who is not being educated), and what are they learning? A number of articles in the section come from Quebec, where both of these questions have taken on particular urgency.

In French, with its genius for abstract nouns, the “who” question is summed up in the phrase le décrochage scolaire. The English translation, “the school dropout problem,” conveys the plain meaning of the French phrase but not its flavour. School dropouts are individuals; le décrochage scolaire is, by definition, something society as a whole needs to be concerned about. And indeed Quebec society has shown concern recently, as reports and newspaper articles abound.

One of the catalysts for the current concern was an article by Quebec’s former premier and still its leading gadfly, Jacques Parizeau, published in Le Journal de Montréal last September and included here in translation. In it Parizeau points not only to the high dropout rate in Quebec as a whole but also to the differences between francophone and anglophone students as well as between public and private schools and between boys and girls. Pulling no punches as usual, he suggests that the bureaucrats in Quebec’s Ministry of Education have a lot to answer for.

Parizeau’s former adviser, Jean-François Lisée, is more measured, but le décrochage scolaire figures in his wide-ranging critique of Quebec’s education system as well. He identifies early childhood and secondary school as key points at which changes can be made that will enhance equality of opportunity. His recommendations reflect policy proposals he believes an “effective Left” – the theme of his latest book, from which his article is adapted – should be putting forward. Click here to read “Human Resources”

John Richards extends the analysis to Canada as a whole. While commending Parizeau for drawing attention to décrochage among Quebec francophones, he points out that there are other groups in Canada among whom the problem is equally – or even more – serious. He is especially concerned with Aboriginals, noting that well over half of male Aboriginals in Manitoba, for example, are high school dropouts. “Ottawa has recently set in place a high-profile Commission for Truth and Reconciliation with respect to the historical wrongs of the residential school system,” he notes. “Where is the equivalent high-profile commission dealing with the wrongs surrounding the present Aboriginal school system?” Click here to read “School Dropouts”

Parizeau, Lisée and Richards all use statistics to buttress their arguments. It may be somewhat disconcerting to the reader that the statistics they use differ. They come from different sources (Parizeau and Lisée use two different Quebec Ministry of Education documents while Richards primarily uses the 2006 census) that in turn apply different methodologies, making reconciliation difficult. Interprovincial and international comparisons are especially tricky since Quebec awards its Secondary School Diploma at the end of Grade 11, while in the rest of North America it’s Grade 12 and the educational level used as a basis for comparison in many European countries is even higher. Readers need to be careful not to read too much into statistics, to allow for imperfections in number-gathering as in other human activities. But none of that affects the authors’ essential point – that by any measure far too few students are reaching an adequate educational level, and that schools need to do a better job of providing students with what they need.

Quebec is also an interesting context for looking at the “what” question, as a result of an ambitious curricular reform that was launched in the late 1990s and has been gradually implemented in the intervening decade. At the heart of the reform is a switch from the accumulation of facts to the acquisition of “competencies” as an educational goal. There is more emphasis on process and strategies, and students are expected to be able to apply the information they learn. For example, in the high school history and citizenship education course, a student is supposed to acquire three competencies:

The reform has been controversial. One teacher of my acquaintance, who strongly supports the principle of the reform and has seen some good things come out of it, nevertheless acknowledges difficulties in its implementation. Top students have done well under the new system, while many of the weaker students have suffered. Evaluation is a constant headache. Teachers are feeling overworked and without proper guidance: guidelines from the Ministry of Education are couched in theoretical language that is difficult to apply. My teacher friend declined to convey to me what one of his colleagues had said about the reform on grounds that it was not printable. 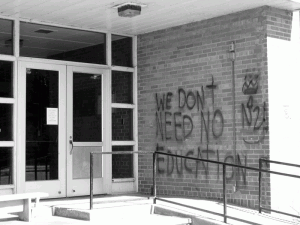 Focusing on the Grade 7 and 8 history program, Christian Rioux and Magali Favre go beyond questions of implementation and question the very premise of the reform, which in their view has robbed history of its integrity. Enumerating examples of skewed priorities and just plain wrong information in textbooks for the program, they criticize the new emphasis on understanding the present in the light of the past rather than the past itself. “We no longer seek to understand developments in the ancient world or the causes of the French Revolution,” they write. “Rather, we scour the shelves of the supermarket of history for something we can apply to our debates on global warming or gay marriage.” Click here to read “This is History?”

The “what” of education has raised questions in other provinces as well. Henry Milner tells the story of the compulsory civic education program that the Ontario government introduced in 2000, partly as an attempt to increase youth political participation. The results have been the opposite of what was intended, and Milner offers some explanations for this unexpected development. Click here to read “Civics, Ontario Style”

Finally, Luc Allaire, drawing on a presentation by Finnish educator Claude Anttila, provides an overview of Finland’s school model, the basis for that country’s remarkable educational success. Allaire’s article complements the broader look at Finnish society by Jan-Otto Andersson elsewhere in this issue. Both find that there is much to be learned from Finland, while cautioning against applying its lessons mechanically to very different situations. Click here to read “Recipe for Success?”