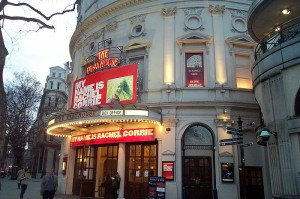 Rachel Corrie, an idealistic 23-year-old American from Olympia, Washington, was crushed to death by a bulldozer driven by an Israeli soldier in Gaza on March 16, 2003. She was protesting collective punishment and the destruction of Palestinian homes. British actor Alan Rickman and Guardian journalist Katherine Viner wrote a one-woman play, My Name is Rachel Corrie, using excerpts from Corrie’s journals and letters. From her raw material they fashioned a solid, intelligent piece of writing, concentrating on Corrie as a human being – a well-intentioned, quite intelligent, somewhat naive, admirably modest, occasionally presumptuous young American woman.

My Name is Rachel Corrie opened at London’s Royal Court Theatre in April 2005, and was published by the Theatre Communications Group in 2006. The play has now been programmed by three North American theatres, including Toronto’s Canadian Stage Company (CanStage). All three cancelled their productions before they reached the stage.

There have been other efforts to stop productions. For example, in 1996, members of Toronto’s black community and their supporters protested against Livent’s production of Jerome Kern and Oscar Hammerstein II’s Showboat. But the producer did not back down. Actual cancellations in response to protests are extremely rare. I’ve worked in professional theatre in Canada for more than 30 years and I cannot remember a single instance.

John J. Mearsheimer and Stephen M. Walt mention Rachel Corrie in their book The Israel Lobby and U.S. Foreign Policy and, not surprisingly, attribute the three cancellations to pressure from the Israel lobby. They cite a New York Times report that New York Theatre Workshop’s artistic director polled “local Jewish religious and community leaders,” and was told, according to the Los Angeles Times, “that after Ariel Sharon’s illness and the election of Hamas in the recent Palestinian elections, we had a very edgy situation.” Miami’s Mosaic Theatre cancelled its production “after protests from what the Miami Herald called an ‘impassioned, vocal minority of subscribers and outside individuals.’”

CanStage Artistic Producer Martin Bragg denies he bowed to pressure. According to Martin Knelman in the Toronto Star, “when he read the script he was ‘absolutely reduced to tears.’”1 But when he went to see a production, “it fell flat … ‘It just didn’t seem as powerful on stage as it did on the page.’” Knelman continues:

The alternate version being told among CanStage insiders: Members of Bragg’s board were alarmed by negative response from influential supporters of the theatre, especially in Toronto’s Jewish community, who were canvassed for their opinion. Many were dismayed and openly critical when confronted with the prospect of the city’s flagship not-for-profit theatre producing a play that could be construed as anti-Semitic propaganda.

Knelman quotes “veteran cultural activist” Bluma Appel: “I told them I would react very badly to a play that was offensive to Jews.” CanStage performs in the Bluma Appel Theatre.

Jack Rose, a developer and a member of the CanStage board “who, like Appel, has not read or seen the play,” told Knelman, “I had one phone conversation about this. There was a question whether it would be a mistake to proceed with it, and my view was it would provoke a negative reaction in the Jewish community.”

Richard Ouzounian, in a Toronto Star article this past January 12, is unequivocal: Bragg withdrew the play in the face of “pressure from his Board of Directors.” (In response to a request for an interview, Bragg told me, “I am not making any further comment on Rachel Corrie.”)

In 1989, I had my own run-in with the Israel lobby. I was resident playwright at Ottawa’s Great Canadian Theatre Company and was working on a play called Masada, a one-person play about the history of Zionism. It had been advertised as part of GCTC’s upcoming season, and was to be directed by then–GCTC Artistic Director Steven Bush.

A local Jewish women’s group wanted to buy out all 220 seats of one performance. They planned to invite a number of people, including me, for a panel discussion afterwards. But first they wanted to read the play. I gave them the script. “It will never happen,” I thought. But they reported back enthusiastically.

Two weeks later, they asked if I would allow a member of the education committee of the Jewish Community Council of Ottawa (JCC) – a Carleton University political scientist – to read the play. I agreed. I was told she approved.

Two weeks later, they called back. The political scientist had changed her mind. They said this would make things difficult, and they would now buy only 100 tickets; but they still wanted to have the discussion afterward.

Two weeks later they said they could sell only 50 tickets.

Two weeks later – we were getting close to opening night – they called to say they could sell only 17 tickets, they would go to someone’s home for a discussion, and I wasn’t invited.

Meanwhile, the JCC asked to speak to GCTC’s board of directors. I was a board member but did not attend. The JCC representatives said that Masada was inaccurate and biased and should be cancelled. The board said they had confidence in me and that I would welcome comments and suggestions. The JCC representatives asked that the show be restricted to adults(!), but the board refused.

Masada opened on January 31, 1990. It has had a few more productions and was published twice.2 It was also the subject of a May 2005 article in Teatron, Israel’s major theatre magazine. I should add that a number of women resigned in protest from the JCC.

What the careful reader will have noticed is that a professor of political science had to read the script twice before recognizing how inaccurate and biased it was. Masada is critical of Zionism, but it’s subtle, too. Bronwyn Drainie saw the Toronto production and attended a discussion afterwards. She wrote in the Globe and Mail that panelists were concerned that some in the audience might be confused about who were the bad guys: “The idea that people might absorb the play and then come to their own conclusions was disturbing to the panelists.”3

My Name is Rachel Corrie and Masada are one-person plays about Israel/Palestine. Neither Corrie nor Masada is radical or extreme: they aren’t anti-Semitic, and they don’t deny the Holocaust or call for the destruction of Israel. And both were subject to efforts by the local Israel lobbies to shut them down.

A few questions spring to mind:

Q:  Why didn’t the three artistic directors who cancelled Corrie avoid the whole controversy by simply not programming the play?

A:  Because they didn’t see it coming. They didn’t think their Jewish patrons and donors would be so easily offended.

Q:  Why were the three artistic directors so timid?

A:  Artists will stand up to anything, except financial pressure. That would be irresponsible.

A:  At the time GCTC produced Masada, the company’s only large donors were government agencies (which is a good argument for government funding and for not letting arts organizations get dependent on large donors). Corrie has just been coproduced by Montreal’s Teesri Duniya Theatre and Vancouver’s NeWorld Theatre, and will be produced – one hopes – in Toronto at the end of May by Theatre Panik and in Ottawa in September by Vision Theatre. These are very small companies with, I would be willing to bet, no large private donors.

Q:  Why does the Israel lobby think it’s all right to stifle work it doesn’t approve of?

Q:  Is it really fair to call those who tried to cancel Rachel Corrie or Masada the Israel lobby? Aren’t they just individuals acting on their own?

A:  Mearsheimer and Walt have been criticized for their expansive definition of the Israel lobby. They include actual lobbying organizations (like the American Israel Public Affairs Committee and Christians United for Israel), along with think tanks (like the American Enterprise Institute and the Washington Institute for Near East Policy); various journals, journalists and academics; elected and appointed government officials; and ordinary individuals who participate in various lobbying efforts. I would tend to agree with Mearsheimer and Walt’s inclusiveness. All play a role.

I haven’t seen My Name is Rachel Corrie but I have read the script – unlike Martin Bragg, without tears in my eyes. As I mentioned before, My Name is Rachel Corrie is a solid, intelligent piece of writing. We see Corrie develop affection and respect for her Palestinian hosts and, as we watch, we grow to like her. When she dies, she dies as thousands of Palestinians have died, and her death represents theirs.

Perhaps the production Bragg saw did fall flat. But a director’s challenge would be – and the script allows this – to make a connection through Corrie to the Palestinians she lived with. Then we in the audience might begin, through her, to feel for the Palestinians, to sympathize with them as human beings, and to see things from their side.

That is something good art can do – and, apparently, something the Israel lobby cannot allow.