In 2016 I reviewed The China Model by Daniel A. Bell, a Canadian academic teaching and writing in China. The China Model is both a scholarly analysis of how the authoritarian political system manages the high-growth Chinese economic system (state-directed capitalism, a.k.a. “socialism with Chinese characteristics”), and a challenge to Western political scientists and economists about dysfunctional Western capitalist democracies falling behind a more meritocratic Chinese political economy. In 2016 the idea that China had any lessons for the West, especially political lessons, was a provocation. Today, as a new Cold War against Beijing is being proclaimed, with China identified as global Public Enemy No. 1 of democracy, freedom and human rights, Bell’s arguments might appear as worse than provocative. In the new as well as the old Cold War, you are either with us or against us.

How well do Bell’s arguments stand up to scrutiny from today’s perspective? In my first reading, I found some of his arguments compelling, although I raised questions about others. Bell does address a core contradiction in Western perceptions of post-Maoist China: a recognition that the Chinese economic system was increasingly competitive with Western capitalism, alongside condemnation of the Chinese one-party state as not only illiberal but self-destructive and ultimately doomed. As I wrote, “Few have paused to consider the problem of how these two faces can be reconciled. How could such an apparently dysfunctional political system produce such spectacular economic results? Something does not quite compute.”

A step back to the old Cold War illuminates the problem. From the Bolshevik Revolution in 1917, the West confronted a Russian regime with two alien faces, economic and political. The Soviet economy was a state command model with no private ownership and no internal market for pricing, while the political system was Orwellian single-party rule with secret police and gulags. The Soviet economic model turned out to be a false façade: it failed miserably to meet even the most basic needs of its own consumers. By the end of the 1980s the collapse of so-called socialist economies led to the collapse of the Communist political regimes that had directed them, followed by the implosion of the Soviet Union itself and the dissolution of the Soviet Communist Party.

The Chinese trajectory after the Communist assumption of power in 1949 was not initially encouraging, as ideologically blinkered Maoist schemes failed repeatedly at a staggering human cost. But following Mao’s death in 1976, China took a radically different turn, establishing a market-driven economy under mixed state and private control that soon registered astonishing growth rates, lifted millions out of poverty and began rivalling the United States as the global economic leader. While economic malaise broke Communist Party rule in the Soviet bloc, the conversion of Chinese Communism to capitalist economics ironically preserved the authoritarian rule of the Chinese Communist Party. In 1989, while the Berlin Wall fell peacefully in Europe, in Tiananmen Square the Chinese Communist Party massacred protesting students and doubled down on single-party rule. 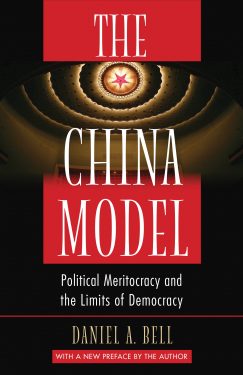 Those who would see China as the 21st-century Cold War adversary replacing the USSR are pouring new wine into old bottles: the ancient ideological conflict between Marxist-Leninist-Stalinist-Maoist Communism and liberal democratic capitalism is definitively over. In its place is a rivalry between two forms of capitalism, the Chinese one more state-directed but still market-driven. The economic systems differ in degree only, but the political systems are a world apart. Bell extols the Chinese system while finding Western political systems seriously deficient. Specifically, he examines the linkages between political authoritarianism and economic success. These cannot be ignored or denied, as many Western observers are wont to do, but at the same time I found myself uneasy with his praise for the virtues of political authoritarianism. A few years later, this unease has turned to alarm.

The world has watched China extend its military reach aggressively across Asia, expanding a Chinese sphere of influence. The world has watched democracy ruthlessly crushed in Hong Kong and viewed with rising alarm threats to force Taiwan under Beijing’s rule, by invasion if intimidation fails. And the world has had to face what the Chinese call their “wolf warrior” diplomacy: their arrogant, bullying extension of internal intolerance of dissent onto the global stage as they have insisted that no one anywhere has the right to criticize China without dire consequences. Canada, of course, endured the sinister spectacle of the imprisonment of the “two Michaels” – hostage “diplomacy” worthy of the worst of terrorist or criminal gangs kidnapping innocents for profit. Behind all this lies Xi Jinping’s ruthless pursuit of one-person rule on a scale not seen since Mao (unsurprisingly, there has been a revival of Maoist iconography, while volumes of dull bombast called “Xi Jinping Thought” emulate the shorter, punchier Little Red Book of Chairman Mao’s pensées).

When I reviewed Bell, I noted and applauded the anticorruption drive Xi had launched at the upper leadership level. Corruption is a persistent problem in an opaque one-party state without effective accountability mechanisms. I tentatively acknowledged that perhaps the power Xi was already amassing in his office might be justified as necessary for exposing corruption among powerful party figures. I noted, however, that an anticorruption campaign without an overarching rule of law looked very much like an old-fashioned Politburo power struggle, with Xi using “corruption” as a weapon to beat rivals into submission. Even if Xi were sincere and the results of the campaign positive, I wrote, “it is hard from the outside to distinguish it from, say, Mao’s self-aggrandizing manoeuvres to label rivals as reactionary deviationists.” A few years on, the verdict is clear: the anticorruption campaign was always designed to establish Xi as the supreme unchallenged boss. If corruption has actually been reduced, this was merely a collateral benefit.

Xi’s rise to supreme power illustrates a profound weakness in the Chinese system of rule. For a time it seemed that after Deng Xiaoping a more collaborative collective leadership cadre had been established, with term limits on individual leaders – hardly democracy as we know it, but perhaps more resistant to power grabs by ambitious individuals. That has proved to be an illusion: collective leadership has crumbled in the face of Xi’s megalomania, now rewarded by his being recognized in effect as leader for life. Xi, like all tyrants, will grow increasingly isolated in an echo chamber of yes-men and flatterers. It is hard to see how the meritocratic bureaucracy that Bell described so enthusiastically can escape unscathed from a context in which the emperor’s whims override evidence-based policymaking. A lesson from Western liberal thought cuts through the Sinocentric façade of the “Beijing Consensus”: power corrupts, and absolute power corrupts absolutely. Xi is on track to follow Mao down that path.

Yet the Chinese economy remains highly competitive globally and still fulfills domestic consumer expectations well enough that the tacit social contract (a tradeoff of economic well-being for political acquiescence to monopoly party rule) has survived recessions and pandemics pretty much intact. The meritocratic principle in administration survives, even if marred by the personality cult of the Leader and authoritarian excesses of the Party. Above all, firm state direction of the private sector has ensured greater stability and adherence to collective national goals than has been the case in the neoliberal West.

The Chinese experience of the coronavirus pandemic illustrates the strengths and weaknesses of the Beijing model. The virus originated in Wuhan, China, and could have been identified, isolated and controlled at the point of origin, sparing the world the deaths and misery that have followed its global contagion. Instead it was covered up until it was out of control. It was covered up because local Wuhan officials, terrified of being blamed by higher-level officials, hoped that it would go away if ignored – and if local whistleblowers were silenced. Bell saw local administration as an area where policy innovations could be tried out and, if proven, make their way upward. In the Xi era, local governments have become notably more timid, fearing shifting winds from on high. Wuhan offers the worst-case scenario for how such a system can go catastrophically wrong.

What followed paradoxically showed the strength of the Chinese system. Once apprised of the magnitude of the threat, the state took charge, imposing total lockdowns on affected areas and organizing a coherent national response in which individual citizens were given clear instructions on their obligations and a countrywide surveillance network ensured prompt compliance. The mixture of administrative efficiency and intrusive authoritarian social control was highly successful in contrast to the fits and starts and reversals of uneven pandemic response in the West. The Chinese response is literally inimitable: the “Chinese characteristics” of one-party rule and mass social conformity are hardly exportable to fractured and fractious Western societies. Nor can the rest of the world ignore the fact that the same system had let loose the pandemic in the first place.

The failure of Western neoliberalism to mount any kind of coherent response to the pandemic challenge has led to greater appreciation of the need for firmer state direction of the private sector. The Chinese model does have this lesson to teach, even if we in the West would fiercely reject the kind of state that the Chinese model suggests. But the pandemic has one last paradoxical lesson, this time for both sides. Even as Western states raise their guard against Chinese overt and covert attacks in the new Cold War, even as Western intelligence agencies gear up for Cold War competition with their Chinese counterparts à la the CIA-KGB wars of the past, the pandemic points in a contrary direction. Common threats to human life and to the planet such as human-made climate change and contagious viruses demand close cooperation and pooling of intelligence and scientific knowledge by all countries and all systems. The new Cold War hawks warning of Chinese threats to “our way of life” are not wrong, on one level. But if they insist on denying cooperation on climate change because, say, of violation of the human rights of the Uighur minority (which is indeed reprehensible in the extreme), they will be giving bad advice indeed.

Churchill made an alliance with Stalin to defeat a worse adversary, Hitler. Global warming and global pandemics are worse adversaries even than the increasingly repellent Chinese regime. Competing and cooperating simultaneously, the West will have to learn how to walk and chew gum at the same time. Bell’s China Model has some things to teach in that regard – both his analysis that still holds and that which would be better abandoned today.