In my review of Daron Acemoglu and James A. Robinson’s The Narrow Corridor, I reported that the authors of the bestseller Why Nations Fail had crowned their earlier achievements by producing a book that was a fascinating read: “Using a simple figure with two axes – ‘power of the state’ and ‘power of society’ – they construct a grand narrative using hundreds of anecdotes and stories, starting with Gilgamesh and ending with the Swedish Rehn-Meidner model.” Overall, I found their argument convincing, and I “appreciated the quality of the writing. The rapid shifts from individual experiences to societies and histories distant in time and space, from ancient myths to today’s problems, catch the reader’s imagination.”

According to Acemoglu and Robinson, outside the narrow corridor liberty and prosperity are not feasible. If the state is too weak, liberty is blocked by the “cage of norms” – an “absent Leviathan.” If, on the other hand, the state is too strong in relation to society, it becomes despotic and extractive. The elites enrich themselves by using their control of the state and limit the freedom of society at large. For the authors, the archetype of a “despotic Leviathan” is China, both imperial and Communist. The chapter “Mandate of Heaven” describes China’s history as a continuous failure because of an overly strong state in relation to society. The only way for people to express their grievances was through rebellions, accompanied by social disorder and wars. In the future, as with all previous instances of despotic growth, Communist China is unlikely to succeed in becoming an innovative and prosperous nation: “China … has been in the orbit of the Despotic Leviathan for so long that the corridor is not even on the horizon.”

Rereading the chapter and comparing it with other accounts of China’s long history, I was struck by how selective the authors were in presenting anecdotes to confirm their thesis that China had practically always been a “despotic unshackled Leviathan,” incapable of sustaining enough liberty to achieve creativity and prosperity. A central figure in their account is the legalist philosopher and statesman Shang Yang, who lived in the fourth century BCE. During the so-called “Warring States period,” with seven states contending for superiority, he advised the ruler of Qin, and managed to reform the state in such a way that it conquered its rivals. Qin Shi Luang – a real despot – became the first emperor of China. Although he acted as emperor for only a decade and his rule ended in civil turmoil, the impact of his and Shang Yang’s legacy, according to Acemoglu and Robinson, has been felt in Chinese history through the succeeding millennia. To raise Shang Yang’s spell to the level of that of Confucius while ignoring the influence of Daoism and Buddhism is a devious way of casting China as the foremost “despotic Leviathan.”

Several of the anecdotes illustrating despotism are picked from situations and conflicts that could similarly be found in the history of almost any longstanding nation. Sometimes the taxes are too heavy, sometimes too meagre to support the public services. In the Qin state a uniform system of weights and measures is seen as a sign of despotism, whereas the Qing government “did not even enforce a uniform system of weights and measures.” The authors write, “There was no liberty, no broad-based opportunities, few incentives. So there would be no industrial revolution, no economic takeoff.” They neglect to mention China’s subjugation by the combined Western powers during the 19th century. 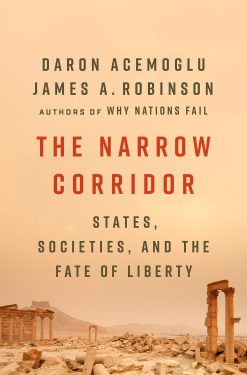 Already during the bronze-age Zhou dynasty, which lasted almost 800 years, technological and administrative advances were exemplary. Iron, ox-drawn ploughs, crossbows and horseback riding were introduced; large-scale irrigation and water-control projects were instituted; roads and canals were constructed; trade increased, towns grew up and coinage was developed; chopsticks came into use; the elaborate Chinese writing system was created; and the teachings of Confucianism, Daoism and legalism were developed.

Acemoglu and Robinson recognize the advances of this “Spring and Autumn” period, but ascribe them to the existence of capital cities and the absence of a strong state. It was only after two and a half centuries of wars and the appearance of Shang Yang and Qin that all this changed. After that, the centralized despotic Leviathan strangled liberty and prosperity in the “Celestial Empire,” which never was to enter the “Narrow Corridor.”

The short-lived Qin dynasty was succeeded by the Han dynasty, which lasted for four centuries, from 206 BCE to 220 CE. Han in many ways corresponded to the Roman Empire. Significant innovations – including the process of papermaking, the use of rudders to steer ships, the use of negative numbers in mathematics, the raised-relief map, the hydraulic-powered armillary sphere for astronomy, and a seismometer employing an inverted pendulum that could be used to discern the cardinal direction of distant earthquakes – were invented and applied. The Han period is only briefly mentioned by the authors, who stress the limitations to growth due to the despotic power of the state.

The Tang dynasty, which lasted from 618 to 906, is generally regarded as a high point in Chinese civilization and a golden age of cosmopolitan culture. The capital Chang’an (Xi’an) was then the world’s most populous city. The empire’s population grew from about 50 million to an estimated 80 million by the dynasty’s end. The Tang Empire was clearly the most prosperous country in the world. It developed woodblock printing and the techniques for making porcelain. The Silk Road was established, and China’s maritime presence stretched to the Middle East and Africa. The only mention of this era by the authors is the Tong code of 653. They ridicule the use of the wording “ministry of punishment” for the ministry of justice.

The Song dynasty began in 960 and lasted until 1279. During that period China’s development was remarkable. The population surged to 100 million and became more commercial and urban. Literacy and learning offered advancement, and the old military aristocracy gave way to an elite of educated civil servants. The bureaucrats ruled under emperors who largely allowed them to set national policies. The Song dynasty was the first government in world history to issue banknotes, true paper money, throughout the country. It saw the first recorded chemical formula for gunpowder and the invention of gunpowder-based weapons, identification of true north using a compass, the first description of the pound lock, and the invention of the astronomical clock. When Marco Polo arrived in China in 1275, most of China was ruled by the Mongols and in decline. However, he marvelled at the splendours of Dadu (Beijing) and Hangzhou, the greatest cities he had ever seen. His impressions emphasized how far ahead of Europe China was. Acemoglu and Robinson, however, stress the omnipotence of the emperor, who was above the law and used people of talent to rule society according to his wishes.

The Ming dynasty, in power from 1368 to 1644 following the collapse of the Mongol-led Yuan dynasty, was the last imperial dynasty ruled by Han Chinese. It is rightly seen as conservative, although China still was the largest empire and centre of the world economy. The most impressive parts of the Great Wall were completed under Ming. For technological advances China became dependent on European innovations. It was late in using spectacles and mechanical clocks – important tools for work and organization. The Manchu invasion, which lasted from 1618 to 1683, saw the transition from Ming to Qing.

The multiethnic Qing Empire lasted for almost three centuries and assembled the territorial base for modern China. Religious freedom was declared, and serfs were liberated. The most significant development of the early and middle years of the Qing Empire was the growth in population density and mobility. The population was roughly 150 million in 1700, then doubled over the next century and reached a height of 450 million on the eve of the Taiping Rebellion in 1850.

The height of Qing glory and power was reached in the long reign of the Qianlong Emperor (1735–1796). The peace and prosperity that China experienced in the 18th century inspired thinkers and writers in Europe, including Voltaire, Goethe and Adam Smith. In the French economist François Quesnay’s characterization, the Chinese empire was “what all Europe would be if united under a single sovereign.” Yet Acemoglu and Robinson’s many anecdotes only illustrate how the Qing regime was unable to provide public services, although it temporarily managed “despotic growth.” The authors do not mention the opium trade and wars, the subjugation of China under European tutelage, the territories annexed by Russia and Japan or the crushing of the nationalist Boxer Rebellion by the Eight-Nation Alliance and the huge tribute imposed on China by the imperialist powers.

If imperial China was “despotic” and out of the corridor for more than two millennia, and yet managed to be a leading nation technologically, economically and culturally for several secular periods, the narrow-corridor narrative becomes contentious. The story can only be validated if we grant that the Chinese experienced “liberty” several times: under the Zhou, Han, Tang, Song and Ming dynasties.

Hence, we need to take a closer look at the concept of “liberty” that Acemoglu and Robinson propose. They begin by citing John Locke: liberty means that people have “perfect freedom to order their actions and dispose of their possessions and persons, as they think fit … without asking leave, or depending upon the will of any other man.” The authors add that people “must be able to make free choices about their lives and have the means to carry them out without the menace of unreasonable punishment or draconian social sanctions.”
In all known societies only a part – generally a small minority – of the population has been free in this narrow sense. This makes the corridor narrow indeed! The anecdotes – relating both to the shackled and unshackled Leviathans – are about the degree of liberty of certain strata and classes. Such meritocratic and commercial strata have probably been as common in China as in other countries and especially empires. Can this be the case also for today’s Communist “dynasty”?

Acemoglu and Robinson describe their sources in a bibliographical essay. However, they do not mention the seminal work by Joseph Needham, Science and Civilisation in China. Books that have inspired me are David Landes, The Wealth and Poverty of Nations: Why Some are So Rich and Some So Poor; Andre Gunder Frank, ReORIENT: Global Economy in the Asian Age; Giovanni Arrighi, Adam Smith in Beijing; and Wang Hui, The End of the Revolution: China and the Limits of Modernity. Minqi Li’s article “China: Imperialism or Semi-Periphery” in the July–August 2021 issue of Monthly Review also gives interesting comparative data.

Jan Otto Andersson is Docent in International Economics at the Institute for Statistics and Economic Research at Åbo Akademi University in Turku, Finland. Read More