For Ireland, 2016 is an important year, the centennial of the Easter Rising that led to a war for independence, the partition of the country, a civil war and, eventually, a new independent state comprising 26 of Ireland’s 32 counties. The Rising also inspired one of the greatest poems by the 20th century’s greatest poet, William Butler Yeats. On February 26 this year, two months before the anniversary, the 26-county state conducted a general election that may mark the end, or at least the beginning of the end, for a two-party system that has lasted through most of the intervening century.

The philosophical differences between Ireland’s two main parties, Fine Gael and Fianna Fáil, are subtle and not easily perceived by outsiders. Both could be classified as brokerage parties and might be labelled, at least by observers accustomed to the more ideological politics of other European democracies, as moderately right of centre. Perhaps the closest parallels to them are the Progressive Conservative and Liberal parties in Canada’s Atlantic provinces, which seem to alternate in office without making much difference to the political agenda. As in Atlantic Canada, party loyalties are strong and durable, often passing from one generation to another, even if outsiders find this difficult to understand.

The origins of the two parties can be traced to the Irish Civil War of 1922–23, which is not to be confused with the war of independence against the British a few years earlier. The issue in the civil war was whether Ireland should accept the status of a British dominion with a governor general representing the Crown, as provided by the Anglo-Irish peace treaty of 1921, or whether it should insist on becoming the republic envisaged by the Proclamation of 1916. (Both sides knew and accepted that the partition of the island was a fait accompli, at least in the short term.) The civil war was on a very small scale, with fewer than a thousand people killed, and the result was a foregone conclusion since the British aided the pro-treaty side. Michael Collins had argued that the treaty was “not the freedom we desire but the freedom to achieve it.” He was at least partly right, since Ireland replaced the governor general with a president in 1937 and withdrew from the Commonwealth in 1949. However, his signature on the treaty, as he himself had predicted, was probably the motive for his assassination.

Fine Gael, which held office without interruption from 1922 to 1932, was the pro-treaty side in the civil war; Fianna Fáil, which was founded by Éamon de Valera in 1926 and has held office for 62 of the last 84 years, represents the anti-treaty side. Fine Gael is more pro-British than its rival, slightly more liberal on “social” issues that challenge the teachings of the Catholic Church, but somewhat more conservative on economic issues. It appeals most to relatively affluent voters, particularly in Dublin, and to the small Protestant minority. Fianna Fáil is more nationalist and more populist. Both now accept the republican constitution of 1937 (largely drafted by de Valera) and neither seriously pursues the goal of regaining the six counties that comprise “Northern Ireland.”

Unlike most European countries, Ireland is blessed by the absence of a right-wing anti-immigrant party, but two other parties are worth mentioning. The Labour Party, founded in 1912, was originally a party of the left, as its name suggests, but supported the pro-treaty side in the civil war. It has frequently, since 1948, held office as the junior partner in a coalition with Fine Gael, which shares its social liberalism to some degree. It has coalesced with Fianna Fail only once, in a government that lasted less than two years. Sinn Féin, the only party that contests elections in both northern and southern Ireland, is further to the left than Labour and is the only party seriously committed to the reunification of Ireland. It has never held office in the 26-county state but shares power in the north, where it is the largest party.

Fianna Fáil held office for most of the years of the so-called “Celtic Tiger,” when Ireland finally became rich, thanks to American direct investment and the European Union. After the economic boom collapsed the European Union forced it to impose austerity measures in return for economic aid. The election of 2011 relegated Fianna Fáil to third place, for the first time in its history, while the Labour Party won 37 seats, an all-time record. Fine Gael and Labour formed a coalition government, with an overwhelming majority. That government in turn gradually lost support when it continued the austerity measures, while the economy recovered only slowly. The nationalization of water utilities, which had previously been a local responsibility, and the imposition of water charges based on the amount of water used helped to make the coalition government unpopular, with Sinn Féin leading the offensive against these measures.

Such was the background to the election of 2016, but before analyzing the outcome it remains to explain the bizarre electoral system, which may be a warning to Canadians of what the Liberals have in store for us. The Dáil Éireann, analogous to our House of Commons, has 158 members, a rather large number for such a small country. They represent 40 ridings, each of which elects either three, four or five members depending on its population. In each riding a party may present as many candidates as there are seats, or fewer if it wants to avoid spreading its support too thinly. Each voter has only one vote, regardless of the number of seats in the riding, and may rank all of the candidates, or as many of them as he or she cares about, from first to last. A candidate is elected when he or she achieves the “quota,” meaning the number of votes cast in the riding divided by the number of seats. In the recent election only 23 out of several hundred candidates were the first choice of enough voters to do this on the first count. With each count the lowest candidates are dropped and their votes reallocated to those who were the second preferences of the voters who cast them. Recounting continues until the necessary number of candidates (three, four or five) have achieved the quota. Typically seven or eight counts are enough, but in the riding of Longford-Westmeath a total of 14 counts were necessary to fill the five seats, and the result could not be determined until six days after the election. 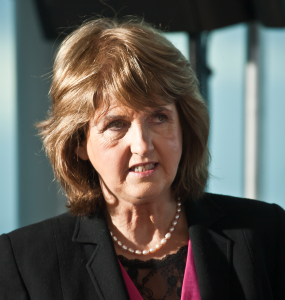 For the first time in history the two major parties between them received (very slightly) less than 50 per cent of the first preference votes in 2016. Fine Gael, which had won 77 seats in 2011, won only 50, but remained the largest party. Fianna Fáil, reduced to an all-time low of 20 seats in 2011, rose to 44 seats, still a below-average performance for that party. The Labour Party suffered a catastrophic decline to only seven seats, and seems to be on the brink of extinction. Like the British Liberal Democrats and the German Free Democrats, it learned that being the junior partner in a coalition can be hazardous to a party’s health. Sinn Féin increased from 14 seats to 23, its best-ever showing south of the partition line. Three minor parties of the left took 11 seats. Independent candidates, most of them defectors from the two major parties, took 23, an unusually large number.

A coalition between the two major parties would seem to be the logical response to this outcome – unless you are Irish. In fact the historic animosity between these two tribes makes it highly unlikely. Neither major party will accept Sinn Féin as a coalition partner, and the other parties, including Labour, seem to have no desire to enter a coalition.

On March 10 the Dáil met and managed to elect a Fianna Fáil member as Ceann Comhairle (speaker of the house), the first time this office has been filled by a secret ballot. As predicted, however, it failed to elect a Taoiseach (prime minister). Neither of the two major party leaders won any votes outside of his own party, apart from the seven Labour members who voted for the incumbent, Enda Kenny of Fine Gael. At the time of writing (March 25) it seems unlikely that a government will be formed before the middle of April, and perhaps not even then. If all else fails the president of the republic, who is elected by the people but has mainly ceremonial duties, will ask Kenny to stay on as a caretaker Taoiseach heading a minority government until a new election takes place, either this year or next. What would happen if that election produced a similar result to the previous one remains to be seen.