In September 2018, Prime Minister Justin Trudeau, along with Foreign Affairs Minister Chrystia Freeland and International Trade Minister Jim Carr, sat down for a roundtable discussion in New York hosted by James Haass of the Council of Foreign Relations. Responding to a question about possible Russian intervention in the Canadian election, Trudeau explained,

Canada already has a fairly strong set of electoral laws … The big differences you guys might notice is you can’t donate more than $1,500 a year to a political party, and you can only make individual donations that are, you know, fully disclosed: no corporate, no union, no other donations … And our electoral district boundaries are determined … every ten years by fully independent commissions. So you get actual, you know, reasonable-looking electoral districts and not some of the zigzags that you guys have.1

If only it were true! In reality, Canada’s federal electoral districts are unequally distributed throughout the country via a provincially maintained silo system that favours some regions over others while thwarting any form of levelling of the electoral landscape. Electoral districts are a hodgepodge of unequal sizes determined by self-serving provincial commissions operating under arcane laws and rules that skew the overall fair distribution of citizen opinion. Canada’s electoral map is a giant tapestry designed to maintain old strongholds and deny emerging realities, one that distorts the democratic right of its citizens to fairly make their wishes known. The end result is that, as voters, many citizens are denied the basic principle of each citizen having an equally valued vote.

Since Confederation, the electoral map has continually evolved with new rules expanding the voting franchise and additional or transformed districts to accommodate population shifts. The secret ballot has been introduced, women have obtained the right to vote, property/means tests have been abolished, limits on electoral financing have been imposed, the voting age has been lowered from 21 to 18, fixed election dates have been mandated, advance voting has been instituted, eligible inmates in federal prisons have been allowed to vote, and the guarantee in the 1867 constitution that English-speaking Quebecers would have a 20 per cent share of representation from that province has been eliminated

Most recently, issues surrounding mail-in, electronic and absentee balloting, along with possible foreign interference designed to skew the vote count, confront Elections Canada. In this context, we cannot ignore the absence of a level playing field, of an electoral landscape that is truly representative. Wonky communications and difficult terrain are not as formidable as in the past and can no longer justify inequality in representation. New challenges surround our democratic mechanisms, and we should not shy away from opening the Pandora’s box of constitutional reform to create a level playing field of equal districts.

The Supreme Court of Canada and the façade of effective representation

Unlike the United States Supreme Court, which continually arbitrates and monitors election activities, Canada’s Supreme Court is conspicuously negligent in enforcing its own past decisions. In 1991 it discarded the well-established Churchillian principle of “one person = one vote = one value”2 and set into motion the unequal system of state-sponsored district distortions that characterize the contemporary Canadian electoral landscape.

In the Reference re Provincial Boundaries case, the Court was asked whether Saskatchewan’s setting a quota for the variation between urban and rural regions of between 15 and 25 per cent violated Section 3 of the Charter of Rights and Freedoms. Writing for the majority in a split 6-3 decision, Justice Beverley McLachlin said,

The stated purpose of the right to vote in section 3 of the Canadian Charter of Rights and Freedoms is not equality in voting power but the right to effective representation. Our democracy is a representative democracy. Each citizen has the right to be represented within the government edifice. 3

Nowhere in the decision, however, does the Court define “effective representation” or “representative democracy” or provide guidance as to practical implementation when it comes to preventing gross deviations in the size of federal electoral districts. What the Court did make very clear was that boundary commissions could take into account geographical factors as well as the history, interests and position of minority groups when setting electoral districts. In the words of Judge McLachlin,

I adhere to the proposition … that “only those deviations should be admitted which can be justified on the ground that they contribute to better government of the populace as a whole, giving due weight to regional issues within the populace and geographic factors within the territory governed.”4

For the last 30 years, Canada’s federal electoral landscape has been governed by this Supreme Court decision and various constitutional and statutory provisions. Voter ranges are officially authorized up to 25 per cent but even that limit has been ignored (see table 1). As the table shows, across Canada federal electoral districts vary in size from Niagara Falls at 101,505 eligible voters to Labrador at 20,084. 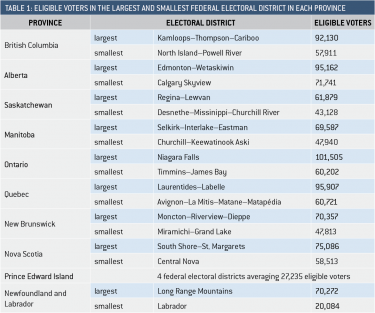 Lax legal oversight and vague statements regarding communities, minorities and histories are wrapped around this vague dual principle of “effective representation” and “representative democracy.”

As a result, notwithstanding the fine-sounding words and terms, or the bland assurances of Prime Minister Trudeau, the basic principle of “one citizen, one vote of equal weight” is effectively absent from Canadian federal elections.

Every ten years following the census, Elections Canada must – under the Electoral Boundaries Readjustment Act (last amended in January 2019) – review all federal electoral districts. Separate provincial boundary commissions assess their federal electoral maps and propose alterations within their own boundaries. Essentially, each commission operates in isolation, and the electoral districts are not compared or contrasted with those of other provinces. The contours result from a variety of “special circumstances,” some emanating from court decisions and others embedded in the constitution. The most recent relevant legislation, 2019 amendments to the Electoral Boundaries Readjustment Act and the Canada Elections Act, recognized “special circumstances” including population shifts within a territory, ethnicity of an area, geographical location, history and minority considerations. In addition, three overarching circumstances are embedded in law: the Senatorial Clause, the Grandfather Clause and the Representative Rule.

The Senatorial Clause guarantees each province at least as many MPs as it has seats in the Senate, the numbers of which were determined in 1915. With a minimum of 30 seats – New Brunswick and Nova Scotia have 10 senators each, Prince Edward Island 4 and Newfoundland and Labrador 6 – Atlantic Canada is allocated considerably more seats in the House of Commons than its present-day eligible voter numbers warrant.

Furthermore, the Grandfather Clause, which guarantees that each province will never have fewer MPs than it had in 1985, works in conjunction with the Senatorial Clause to maintain an inflated level of representation for some provinces in the House of Commons. In sum, regardless of population decline and eligible voter loss, no province will elect fewer MPs than it had in 1985 or than its number of senators in 1915!

The Representation Rule is a typically Canadian construct that, according to the Elections Canada website,

Elections Canada allocates electoral districts individually by province rather than by a Canada-wide calculation of eligible voters. The calculations are further complicated in that formulas are based on “population” rather than on “eligible voters.” At the present time, a detailed four-stage process determines each province’s districts:

STAGE 1: The provincial population (as determined by most recent census) is divided by the Electoral Quotient (established for the most recent redistribution at 111,166 people) and this leads to an initial allocation of electoral districts within each province.

STAGE 3: The Representation Rule is applied.

STAGE 4: Finally, the total number of districts for each province is settled, thus arriving at a total of House of Commons seats for the next federal election.

Both the Representation Rule and the Grandfather Clause can be changed by a simple majority vote in Parliament. While the elimination of these two oddities will not magically restore a balanced electoral field across Canada, their removal would begin the process of electoral reform. As a result, the House of Commons would have approximately 317 seats rather than the present 338, established by adding 21 extra seats to selected areas. Of these additional seats, Quebec was allocated 6, the Atlantic provinces 9 and two Prairie provinces 6. British Columbia, Alberta and Ontario do not benefit, although together they contain more than half of Canada’s citizens. These provinces were underrepresented in the House of Commons prior to 2015 and will be even more underrepresented in future federal elections. The end result is that Canadian citizens in some regions have significantly – and increasingly – more political influence than others.

A Great Reform Bill for Canada

The foundation of all democracy is that the people have the right to vote. To deprive them of that right is to make a mockery of all of the high-sounding phrases which are so often used. At the bottom of all tributes paid to democracy is the little man, walking into the little booth, with a little pencil, making a little cross on a little bit of paper. No amount of rhetoric or voluminous discussion can possibly palliate the overwhelming importance of that point.6

We have not followed the British model, from the Great Reform Bill in in 1832 which eliminated many of the “rotten boroughs” then anchored within the British political system to the reforms postulated by the Boundary Commission for England in 2018, which constitute a continuing effort to ensure balanced electoral districts and respect the equality of every voter.7

In her seminal treatise on voter suppression, Carol Anderson identified two main types of gerrymandering, both of which she categorized as “lethal.”8 The first, which she termed “racial,” dealt with ways and means to keep ethnic and racial minorities from being fairly represented via the electoral system by swamping their geographical areas with other groups or separating their enclaves to dilute their impact. The second type was “partisan” (religious, cultural, linguistic) gerrymandering tied to party affiliation.

What is described here might be termed a third type of gerrymandering, one that is state-sanctioned. Whatever justification there may have been in the past for favouring less populated regions, under emerging technologies that – as we have learned while confined during this pandemic – allow us to meet online, these inequities are no longer acceptable.

In sum, Canada’s landscape is not, as Prime Minister Trudeau asserted, “reasonable-looking.” It is time to embark on a Canada-wide creative democratic journey to strike down the Representation Rule and the Grandfather Clause via legislation and the Senate Floor Rule/Senatorial Clause via constitutional amendment, and draft a Great Reform Bill of our own.

Jon G. Bradley is a retired McGill University Faculty of Education professor and co-author of Making Sense: A Student’s Guide to Research and Writing in Education (Oxford University Press, second edition 2017). Sam Allison is a retired senior secondary school history teacher. His latest book is Driv’n by Fortune: The Scots’ March to Modernity in America, 1745–1812 (Dundurn, 2015).

8 Carol Anderson, One Person, No Vote: How Voter Suppression is Destroying Our Democracy (New York: Bloomsbury, 2018).