I am writing in Vancouver four days after our desultory general election. By coincidence, Greta Thunberg is in town. Ten thousand paraded in the city centre today and cheered her stern Old Testament sermon delivered on the steps of the Vancouver Art Gallery:

If the adults really loved us, they would … do everything they possibly could to make sure that we have a safe future – a future to look forward to. But they are not doing that … It feels like they are doing the exact opposite, that they are desperately trying to change the subject every time the climate crisis comes up … They are trying so hard to delay the actions required for preventing this crisis from getting worse. Because they are so afraid of being unpopular and making uncomfortable decisions. It is like they are selling our future for their comfort and profit.1

Perhaps she should have devoted a few words to China. China has now surpassed the United States as the world’s largest emitter of greenhouse gases (GHGs). Thanks, in part, to a massive increase in electricity production, primarily from coal-fired plants, the average Chinese citizen now enjoys an income level that, a generation ago, was available to only a tiny minority. There is a case to be made that the Chinese had the right to pollute in order to put an end to dire poverty. My generation of Canadians – I turned 75 this year – cannot use that argument. Basically, Greta is right: my generation has enjoyed a living standard better than any in human history, but at the cost of massive environmental damage, with worse to come. An item on the news tonight was mass evacuations caused by half a dozen fires raging along the California coast.

Relative to Greta’s sermon, along with David Attenborough’s lament on vanishing wildlife and the experience of families abandoning their homes in suburban Los Angeles, our debates on climate policy during the campaign were tepid affairs that soon will be forgotten. A short review is in order, if only to impress how parochial the Canadian political debate on climate change is.

In December 2015, shortly after his election victory, Justin Trudeau attended the UN “Conference of the Parties” on climate change (COP21) in Paris. On our behalf, he committed Canadians to adopting the target proposed by Stephen Harper a decade earlier, namely a 30 per cent reduction of Canadian GHGs by 2030 relative to 2005 levels. It was a commitment to do something, although obviously not enough to impress Greta.

The government estimate of 2005 emissions is 730 megatonnes of CO2 equivalent. A 30 per cent reduction implies that our emissions would fall by 2030 to 511 megatonnes. Emissions in 2017 were 716 megatonnes. Commissioned by the CBC, Navius Research took a stab at modelling the GHG reductions by 2030 that would arise if the promises of each of the four major parties were implemented. As figure 1 illustrates, only the Greens would successfully lower emissions below the promised 2030 target. 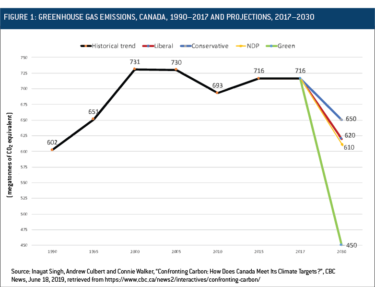 Here, in summary, is how the Greens intend to realize their GHG reductions by 2030:

Supporters of the “progressive” parties (lumping together all except the Conservatives and Maxime Bernier’s People’s Party) might reply to Greta that they had voted for a party cognizant of her message. If Greta looked at figure 1, she would probably spare the Greens – who won 7 per cent of the vote and elected three MPs – but say something rude about the rest of us, Conservatives and progressives alike:

You who voted Conservative, especially those in Alberta and Saskatchewan, want to perpetuate Canadian dependence on oil and gas. You want to change the subject and talk about pipelines to tidewater. You who voted for a “progressive” party are smug because you promise to do somewhat more than the Conservatives. In terms of the impact of your parties’ promises, the differences are trivial: Conservatives would lower Canada’s 2030 emissions to 1995 levels, Liberals and NDP to early 1990s levels. Except for the Greens, you Canadians are all guilty of delaying the serious initiatives required.

There are many arguments raised by the 93 per cent who rejected the Greens and opted to do very little:

And even the Greens have yet to acknowledge what is probably required if Canada ever aspires to be a leader in containing rising temperature. The International Panel on Climate Change wants midcentury GHG reductions to be over 50 per cent, and high-income countries to make more aggressive reductions than developing countries. Modelling of the Green agenda implies reductions of nearly 40 per cent by 2030. If Canada aimed to, say, double its reductions, from 40 per cent to 80 per cent, what then? Presumably, any government rash enough to propose such an agenda would experience an electoral fate similar to the destruction of the Mulroney-Campbell Progressive Conservatives after they imposed the GST.

Many environmentalists believe that benign renewable energy sources (wind and solar) could completely defossilize our economy in a generation, with minimal increases in energy costs. The costs per megawatt-hour of wind and solar power have declined dramatically this decade, but neither is a source of “base load” (“dispatchable”) power. To provide power when the sun is not shining and/or the wind is not blowing requires either massive increases in storage capacity for renewable sources or power plants powered by fossil fuels, nuclear or hydro.2 Traditionally, Green parties have opposed major new infrastructure investments in nonfossil “base load” sources and have glossed over the limitations of wind and solar. Incidentally, those European countries that are reliant on nuclear base load power (such as France and Sweden) have per capita emissions less than half that of Canada.

Inroads has not published much on climate change but we did, two years ago, publish Chris Green’s incisive critique of Trudeau’s promise in Paris to implement Stephen Harper’s GHG reduction commitment.3 Green quoted Thomas Schelling, a Nobel economist, on the 1992 Kyoto Agreement:

I cannot help believing that adoption of such a commitment is an indication of insincerity … A serious proposal would specify policies like taxes, regulations, and subsidies and would specify programs (like research and development) accompanied by very uncertain estimates of their likely effects on emissions.

Until we find our own Greta capable of drawing 10,000 to a more-or-less spontaneous demonstration in Vancouver – and a much larger number to an earlier demonstration in Montreal – Canada will probably continue with our parochial preoccupations. We will fiddle while California and many other places burn.

2 I invite readers to read Steven Lightfoot’s review of Joshua S. Goldstein and Staffan A. Qvist’s A Bright Future in the Summer/Fall 2019 issue of Inroads, Nuclear Power: Scary but not Dangerous. Goldstein and Qvist undertake a rehabilitation of nuclear power, and Lightfoot is sympathetic to the case made.