When British voters go to the polls on June 23, they will make an unprecedented decision. For the first time, a member state of the European Union (EU) is holding a referendum on the question of whether to remain in the union or leave it. The race is tight, with polls suggesting that neither side can be confident. As of May 2 the “poll of polls” calculated by the team around Professor John Curtice and the WhatUKThinks website suggests that, on average, poll results currently find Remain and Leave tied at 50 per cent.1

Not surprisingly, given the potential impact on the EU of a British exit, interest in the referendum is high not just in the UK but also across other member states. Changes agreed to following renegotiation of the terms of Britain’s membership in the EU in February will affect other countries in addition to Britain. In much of the British debate so far there has been an assumption that any further negotiations (regardless of the outcome of the referendum) would follow largely rational and pragmatic analysis by other governments. Very little consideration has been given in most British conversations to what people in other EU states actually think of Britain and how they would respond in the case of a “Brexit.”

That may at first seem plausible, considering the elite character of government negotiations at the European level. But in the case of Britain leaving the EU, heads of other national governments may be attentive to public opinion in their respective countries. Furthermore, even if the UK remains in the EU, the British referendum process may lead to calls for more direct engagement and referendums elsewhere.

Both issues suggest that it is important to gauge public opinion in the EU both on Britain’s membership in the EU and prospects for analogous referendums in other countries. Our team at the University of Edinburgh and the German think tank d|part has conducted a large survey in six EU member states – Germany, France, Poland, Spain, Ireland and Sweden – to comprehensively assess attitudes on these issues. More than 8,000 respondents were interviewed in late January and early February using an online panel sampling approach with a detailed stratification process to achieve representative sampling in each country.2

Should the UK remain in the European Union? 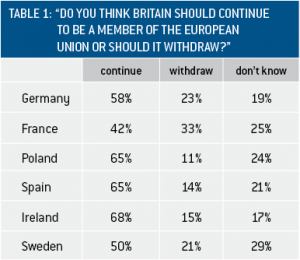 While views in the UK are very evenly split, perspectives elsewhere in the EU are more consistently favourable to the UK’s remaining in the EU. As table 1 shows, in each of the six countries surveyed more respondents favoured a continuation of the UK’s membership than wished to see it leave. However, the extent of support for the UK continuing in the EU varies among the sample countries. In Poland, Spain and Ireland, about two thirds of respondents favour UK membership, even with don’t knows included. The proportion falls below 60 per cent in Germany and drops to 50 per cent in Sweden, while in France those who want to see Britain stay outnumber those who wish to see it go only by 42 per cent to 33 per cent.

This ranking is more or less repeated when people are asked whether they think that UK membership is good or bad overall for the rest of the European Union (table 2). There are more people in each country who think that the UK’s membership is good for the EU than who think the opposite. As above, the French are the most dubious; the Poles, Irish and Swedes are the most positive. 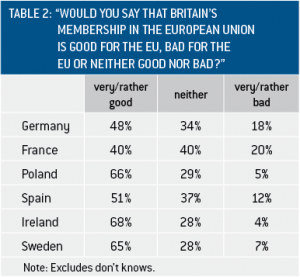 Interestingly, people’s views about the UK’s potential exit are systematically related to their evaluation of what their own country’s strategic response to the EU should be. At first sight the relationships summarized in table 3 may seem obvious, but they contain some very interesting nuances. Each cell shows the percentage of respondents within each country who would like Britain to remain a member of the EU, conditional on their preferred long-term strategy toward the EU for their own country. This question allows people to express more nuanced views: that their country should leave the EU, that EU powers should be reduced, that the status quo should prevail, that powers of the EU should be increased or even that the EU should be the single European government.

The same also works in reverse. While generally, those who are more Europhile are more likely to want the UK to stay, there is a differentiated minority in the most pro-EU group – those wanting a single European government. In France, Ireland and Sweden the percentage of those who want the UK to remain is substantially smaller in this group than among those who want to retain individual member states but increase EU powers. It seems that a minority of Europhiles in those countries see the UK as an obstacle to their goal of very deep integration. 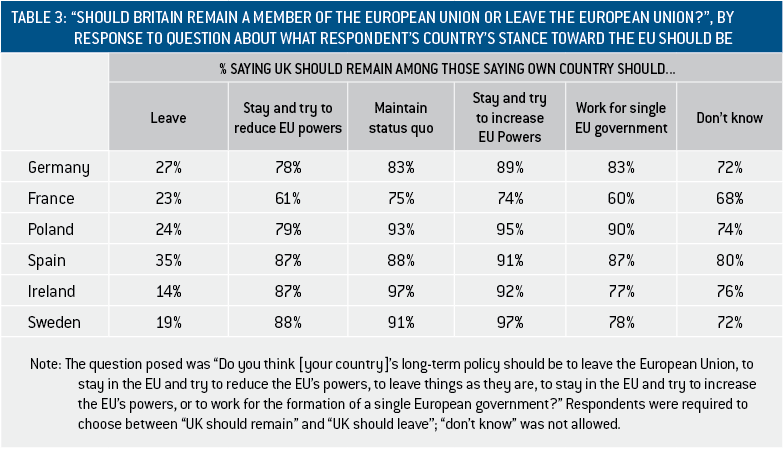 What should Europe do if the UK leaves?

While we see a general pattern of support for UK membership, the results strongly suggest variation between countries and also within countries with regard to the motivations that underlie support or opposition to UK membership. Variation between countries becomes even greater when we ask people what should happen if British voters decide to leave on June 23. A major concern of governments, businesses and individuals is what sort of economic relationship the UK would have with the rest of the EU. Would the UK effectively enter the single market or would there be some other form of arrangement? Such negotiations would likely generate potentially contentious discussion.

As table 4 shows, there is no uniform view on this matter across the countries surveyed. While more than twice as many people in Poland and Germany think that the UK should be allowed to enter the EU’s single market after leaving the EU than think the reverse, in Ireland and Sweden only a plurality say yes to Britain’s entering the single market. In France and Spain a plurality say that, if Britain decides to leave, it should leave for good and should not be given access to the single market.

Some may argue that such findings are not important, as economic rationales would dominate actual decision-making processes. However, economic rationales may not prevail. It would not be the first time that leaders of member states would use EU issues to assert a popular domestic position. This may be particularly tempting for leaders who are unpopular domestically and hope to strengthen their popularity by responding to domestic scepticism about UK’s post-exit access.

As we can see, this prospect is particularly salient in France and Spain because fewer than a quarter of respondents think that their head of government had “some” or “a lot of” influence on the renegotiation the UK undertook with the rest of the EU in the early months of 2016 (table 5). Germany is the only country where a majority ofespondents seem to think their leader exerted “some” or “a lot of” influence.

If President Hollande of France, for example, chose to consider domestic public opinion in negotiations after a hypothetical exit of the UK from the European Union, negotiations could become substantially more difficult than suggested by those who assert economic rationales alone will prevail.

Should other countries have their own referendums?

Even if the UK votes to remain a member of the EU, knowledge about this process and discussions surrounding it may well have an impact on future discussions among European leaders. But is there a potential for some ripple effects elsewhere in the public domain? We asked respondents in the six countries surveyed whether they would like to see a similar referendum in their own state. As table 6 shows, there does indeed seem to be some appetite for direct forms of decision-making – but once again, to a varying extent depending on which country we are looking at.

In France those wanting a referendum of their own are a majority, and in Sweden, Germany and Spain they are a plurality. Only in Poland and Ireland do more oppose than support a referendum, and in no country do those opposing a referendum constitute a majority. The result in Ireland is particularly interesting, given that country’s rather extensive experience with constitutional referendums and especially ones focused on EU questions.

We should not expect a strong drive for such referendums across all member states, but it is clear that substantial numbers of people elsewhere in the EU would like a direct say. In countries like France and Sweden, where opposition to a referendum is more limited, they could become vocal actors.

The public will have its say

The UK referendum on EU membership is, so far, a unique event. The race in the UK is close and discussions in the lead-up are likely to stay heated. When it comes to discussing what would happen in the case of a British exit from the EU, discussions are often focused on economic rationales only. However, as we have seen here, public views elsewhere are actually quite complex and potentially important.

There is good news for those in Britain interested in the views of their fellow Europeans. The majority think that the UK’s membership is good for the EU and want it to remain a member. However, the extent of this support varies greatly, with scepticism about UK membership highest in France among the countries surveyed. These differences become even more pronounced when attitudes about what should happen to the UK if it left the EU are examined. The evidence suggests that decision-makers would need to take domestic pressures from their respective publics into account as they negotiated whatever arrangements followed a Brexit.

Regardless of the outcome of the UK referendum, respondents in some of the countries surveyed want stronger forms of direct democracy in their own country’s decision-making in relation to the EU. Whether the UK’s referendum acts as an encouraging example or a deterrent for those sympathetic to referendums is likely to depend partly on the outcome, and also on the quality of the UK debate in its most heated phase leading up to June 23.

1 For up-to-date polling summaries, see here. The figure cited here is based on all polls conducted between April 22 and 29, 2016. The 50-50 result excludes undecideds.

2 This survey was conducted as part of the “UK in a Changing Europe” research program of the Economic and Social Research Council, which provided funding for this research. It was carried out under the auspices of the Applied Quantitative Methods Network (AQMeN) by a team from the University of Edinburgh’s School of Social and Political Science and the German think tank d|part. Full details and briefings can be found at http://aqmen.ac.uk/projects/euukreferendum. A detailed methods note explaining the survey design, sampling and weighting can be found at http://aqmen.ac.uk/EUUKmethodsnote. In this article, in all tables except table 2, N =1,500 for each of Germany, France, Poland and Spain, 1,000 for Ireland and 1,002 for Sweden. In table 2, N = 1,362/1,374 for Germany, 1,300/1,333 for France, 1,269/1,306 for Poland, 1,357/1,367 for Spain, 917/928 for Ireland and 819/852 for Sweden.

Jan Eichhorn is a lecturer in social policy at the University of Edinburgh and Research Director of the German think tank d|part. Read More