One of the most important issues in the 2019 election was Canada’s energy future. There was intense debate on issues such as carbon taxes, pipeline siting and the balance between environmental concerns and the economic benefits associated with fossil fuel development. These issues were especially important in western Canada, characterized by strongly differing opinions between the Prairies and British Columbia.

By May 2020, many of these concerns seemed moot given the impact of the COVID-19 pandemic. The international oil and gas industry was collapsing globally as a result of reduced demand, a forthcoming recession and the Saudi-Russia predatory pricing war. With the price of oil falling below US$20/barrel, Canada’s more-expensive-to-produce oil sands sector is facing a perfect storm. Economic pain in the energy sector arising from the pandemic may make the carbon tax even more contentious than it was in 2019.

One cannot expect these divisions to go away any time soon. A primary reason is that public opinion on many energy issues is regionally polarized. Regional polarization of attitudes is greater in Canada than in the United States, the European Union or South America.

Research by the Positive Energy team at the University of Ottawa1 (including my colleagues Erick Lachapelle, Monica Gattinger and the rest of the research group) demonstrates that energy polarization is significant in some areas, fragmented in others and in places not severe. In short, Canada may not be quite as polarized as the media make us out to be. That’s the good news. The bad news is that regional energy profiles are likely to persist. Attitudes across Canadian regions are based on highly differentiated geographies and infrastructure that is very expensive to change.

Alberta has 83 per cent of Canadian oil sands production; Saskatchewan has the vast majority of the country’s uranium production. Both provinces generate half of their electricity from coal, and slightly less from natural gas. By contrast, Ontario’s energy production is dominated by a mix of hydro, nuclear and renewables. Both British Columbia and ​Quebec derive the vast majority of their electricity from hydro. The Atlantic provinces are a somewhat diverse mix of hydro, wind, coal, nuclear, gas and biomass.

These production systems are strongly tied to regional identity and the jobs that people have, and they reflect long-term economic infrastructure investments that risk becoming stranded assets if those regions pivot and adopt new means of power generation. Underlying interests and attitudes in each of those regions are tied to the occupations and infrastructure that dominate regionally. Common ground is hard to find when one ground has uranium and another has wind turbines, while still others have coal mines and coal-based thermal power plants, or large hydro, or oil sands extraction.

The irony in all of this is that Canada is an energy superpower with one of the world’s highest levels of energy production per capita. Our energy mix is highly diversified (coal, wind, gas, nuclear, biomass, oil, hydro, etc.), and the energy sector has generated high incomes for those who have invested or are employed in it. One might imagine that, in such a situation, Canadians would have roughly similar attitudes on energy policy, but this is not the case.

So, what do we see when we look at Canadian public opinion on energy issues? In the fall of 2019, our team conducted a panel survey of 2,679 Canadians to assess public opinion concerning energy, with five regional subsamples of more than 500 each (B.C., Prairies, Ontario, Quebec, Atlantic Canada). The survey was conducted amid growing polarization over energy and environment policy in the months leading up to the October general election.2

The term polarized typically describes public opinion that is strongly divided, with sharply contrasting sets of beliefs. Polarization describes the movement over time to more polarized views, but also the state of being polarized. Our analysis distinguishes between fragmented opinion, where public opinion is split but views are not strongly held, and polarized opinion, where public opinion is both split and concentrated at the extremes. Across a range of energy issues, we find areas of fragmented and polarized opinion, but areas of agreement as well. We are also able to demonstrate expectations in Canada for future changes in the energy sector (aka the “energy transition”), an area where there seems to be agreement.

Why should we care about polarization? Doesn’t it simply represent pronounced differences among political viewpoints? Certainly, political parties are expected to provide distinct agendas for voters so that clear decisions about policy agendas can inform the political process. Not surprisingly, our research shows that party identification is one of the strongest drivers of opinion on energy issues.

However, a variety of concerns arise from highly polarized electorates. Democracies are generally more effective when differences are not concentrated in hardened extremes, with little support for the middle ground. At that point, it becomes much more difficult for governments to find political accommodation and undertake deal-making. Further, polarization is associated with political intolerance and lack of respect for differing opinions, a situation that over longer periods of time is incompatible with democratic politics.

Finally, polarized positions can lead to policy instability, in which businesses, markets and the public are subjected to radically different policy approaches and whipsaw as governments change. We’ve seen this on climate change policy at the federal level as Canada moved from the Harper government (withdrawal from Kyoto and low targets) to the Trudeau government (carbon tax commitments and legally binding targets for net-zero by 2050). We’ve seen a similar dynamic in the opposite direction as Ontario moved from the Liberals’ Green Energy Act (and expensive Feed-In Tariff programs to encourage renewable energy) to the new Conservative government’s cancellation of $230 million in green energy contracts.

In the energy and environmental sector, we see typically high levels of polarization and fragmentation. Yet it is not clear how energy polarization is different from disagreement in other political domains, and whether different kinds of factors drive levels of disagreement or agreement. We can see polarization clearly in a question about the carbon tax among the total national sample in figure 1. Polarization is present when, as in figure 1, the distribution forms an inverted U shape, with most opinions at the extremes and few in the middle. 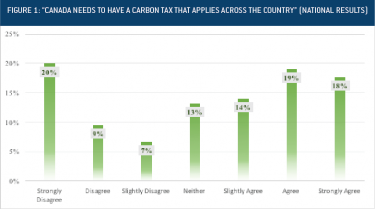 We can also see polarization between regions in figure 2, the regional graph for the same question (combining “strongly agree” with “agree” and “strongly disagree” with “disagree” to provide a clearer visual). Our results demonstrate that regional profile is a critical driver of opinion on energy and the environment. In this instance, our question on carbon tax shows that B.C., Ontario and ​Quebec, where a majority support a national carbon tax, are notably different from the Prairies, where a majority oppose it.

Our research also reveals other critical factors that drive disagreement over energy issues. The big picture is complicated, with multiple factors at play across differing kinds of questions, and our upcoming work will include regression analyses that address many factors simultaneously. But while a regional profile does not provide the whole picture, it is clear how strong the regional factor is in driving opinion.

The impact of regional energy profile is not limited to carbon taxes. We also see it with respect to nuclear power, a topic that is not completely polarized among the overall population, but is significantly differentiated among regions. In figure 3, you can see that attitudes toward nuclear power among the total population are fragmented – fairly evenly split across all opinion areas. However, the regional distributions show deep divisions between regions that have nuclear power plants (Ontario) or economic activity devoted to uranium mining (Prairies) and regions without strong links (​B.C. and Quebec). In Quebec, 48 per cent strongly or slightly oppose nuclear as a solution to global warming. 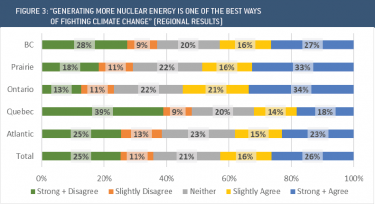 We also see regional differentiation over dimensions where Canadians have a stronger degree of agreement overall. As figure 4 illustrates, 52 per cent of Canadians overall optimistically believe that the country can develop oil sands and still meet its climate commitments (perhaps a version of Canada having its cake and eating it too?). While this is certainly not a consensus, the overall opinion numbers do show that Canadians lean strongly to the favourable side, with only a fifth in disagreement or strong disagreement. When we look at regions, we see that the Prairies overwhelmingly favour the statement, while ​Quebecers are polarized – an even split on the issue. 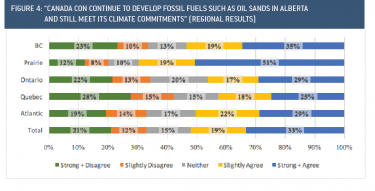 Fortunately, there are some areas of agreement. Canadians strongly believe that we need more renewable energy, even with cost increases. This support plays out across every region in Canada, with only a small comparative dip in the Prairies.

Given the powerful role that regional opinion plays in Canada, what might we hope for? In short, we need stronger national leadership willing to develop and create grand bargains across the disparate energy production systems. This is hard to do in a federal system with strong provincial powers over resource policy, but it is not impossible. Further, Canadians were clear in our survey work that they see the federal government as the primary level at which to develop a coherent vision for changes in the future energy system and the transition that will come over the next 30 years. The real question is whether Canada can lead as the energy superpower that it inherently is, or whether it will be dragged into a new energy paradigm in the midst of squabbling regional jurisdictions.