Translated from French by Julian Olson

Once upon a time, in a land that is not far away, parents had access to an affordable, high-quality educational program for their young children, and it made them very happy. One day, the group of people who had set up this program lost power to another group of people who didn’t like it and did everything they could to put obstacles in its way.

Any resemblance to real people or political parties is definitely not coincidental. When the Parti Québécois government set up the Centres de la Petite Enfance (CPEs) in 1997, the Quebec Liberal Party, then in opposition, denounced these daycare centres. Liberal Leader Daniel Johnson attacked them as a “single model” that did not respect parents’ free choice.

It was soon apparent, however, that Quebecers liked the $5-a-day, not-for-profit, parent-run agencies. As a result, although the number of daycare spaces grew rapidly, there were still not enough to meet the demand. By the late spring of 2003, when the Liberals took office, Quebec had added 90,000 regulated daycare spaces to the 78,864 it had in 1997. In 2004, the number of regulated daycare spaces in Quebec represented nearly 37 per cent of the total number of such spaces in Canada.1 In a study published by the Institute for Research on Public Policy, Christa Japel, Richard E. Tremblay and Sylvana Côté noted, Quebec is therefore unique in Canada, not only in the number of available regulated, fixed-fee, reduced-contribution child care places, but also in its method of funding them. While in the other provinces and territories the emphasis is on providing child care grants to families, in Quebec a significant proportion of the provincial budget goes to service providers.2 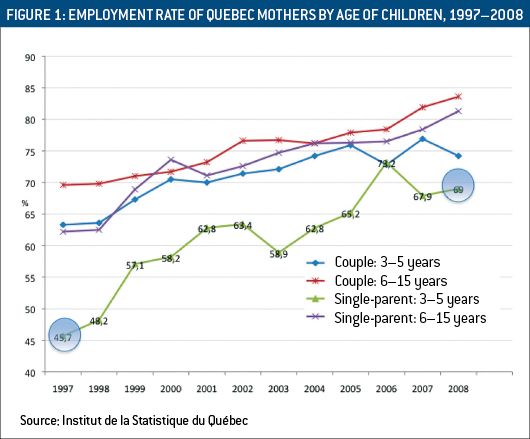 Notable among these service providers are the Centres de la Petite Enfance. Parents appreciate the CPEs both for the good educational environment they provide for their children and for their affordability, and their existence has made it easier for a large number of mothers of young children return to work. The rate of employment among mothers with children aged three to five has risen dramatically since 1997, from 63 to 75 per cent for mothers in two-parent families and from 46 to 69 per cent for single mothers (figure 1). 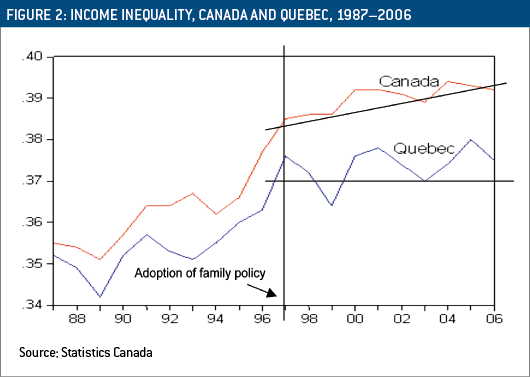 This increased rate of employment has had a positive effect in reducing the gap in disposable income between rich and poor families. While in Canada the gap between rich and poor (the Gini coefficient) has been widening for more than 20 years (figure 2), it stabilized in Quebec after 1997, so that the level of poverty among Quebec families is now well below that of other provinces.3

With such positive results, it was not surprising to see comments such as this one from Michel David in Le Devoir: “For the first time in a long time, Quebecers felt that they were seeing a major reform of which they could be proud. In the National Assembly, Premier Lucien Bouchard took pleasure in brandishing the many articles in the foreign press that lauded this new marvel.”4

Faced with the undeniable popular success of the CPEs, the Quebec Liberals did a dramatic about-face and stopped calling for dismantling the CPE system. During the 2008 election campaign, Premier Jean Charest even went so far as to hold a press conference in a Centre de la Petite Enfance. He announced that he would create 20,000 new spaces and promised not to raise fees above the $7 rate his government had set during his previous mandate. He sought to reassure families that waiting lists would go and that access would be better adapted to their needs (part-time care, flexible and atypical hours, etc.), and promised high-quality services that would set children on a path toward educational success.

Up to now, the Charest government has kept its promise not to raise fees. As for providing new spaces, the Liberals decided to allocate more spaces to commercial daycare than to the CPEs, as a means of enhancing parental choice. The numbers are clear. In 2003, after six years of growth, the not-for-profit CPEs offered 84 per cent of educational daycare spaces in Quebec. This figure included two forms of daycare services: centre-based daycare and CPE-supervised daycare in a family environment.

In December 2005, however, the Charest government used closure to pass Bill 124, which took responsibility for daycare in a family environment away from the CPEs. Since then, the position of the CPEs has dramatically eroded. This is the picture today:

This development is especially disturbing in that the number of families needing daycare services is increasing significantly, mostly because of the substantial rise in births over the last few years. More and more, families need to turn to the commercial sector or even to unregulated daycare to find a space. As a result, there is a risk that the efforts undertaken over a number of years to provide high-quality educational services to all young children in Quebec will be diluted.5 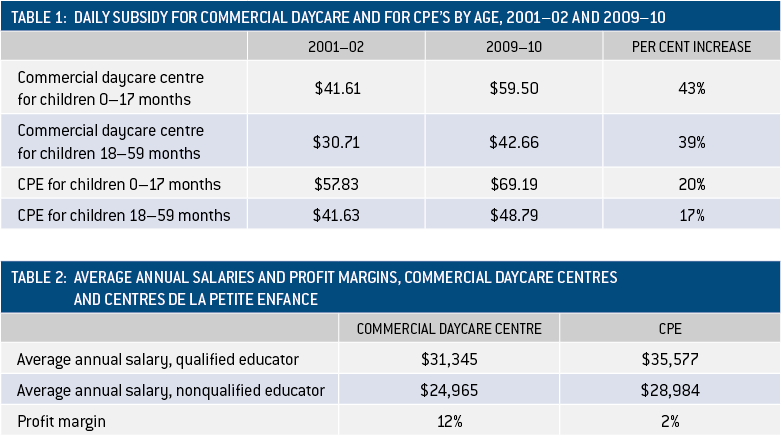 The Liberal government has strongly encouraged the development of commercial for-profit daycare centres and substantially increased their subsidies. As we can see in table 1, financing per child has increased almost twice as fast in commercial as in public daycare. One consequence has been that while initially the government saved a significant amount of money by favouring commercial daycare centres, these savings (out of a Quebec government investment in educational services for young children that in 2009 amounted to more than $2 billion) have now become marginal.

Nicolas Girard, Parti Québécois critic on matters concerning young children, has fought tenaciously against the commercialization of daycare over the last year, pressing Family Minister Tony Tomassi and his successor, Yolande James, who assumed the portfolio after Tomassi was forced to resign over use of a credit card furnished by a Liberal donor. Under Tomassi, the family ministry encouraged expansion of commercial daycare centres whose primary goal is profit rather than high-quality service. “Instead of giving priority to the experts – the CPEs – the Liberals have encouraged the growth of chains of daycare centres that are sometimes owned by people without experience, such as real estate agents or even someone whose background was in the slaughterhouse business,” notes Girard.

Before resigning, Tony Tomassi promised to give responsibility for allocating spaces back to regional committees, which are made up of a variety of representatives. However, this bill has not yet been passed, and as of today this responsibility still lies with the ministry, which has been accused of favouritism.

Tomassi’s resignation was preceded by numerous allegations that Liberal Party donors were favoured in the allocation of daycare spaces. This past February 12, La Presse reporter Tommy Chouinard, using research from the Parti Québécois, wrote that 1,600 places were allotted to 32 private daycare centres whose directors had given $112,000 to the Quebec Liberal Party since 2003. Some contributed to the Liberals for the first time in 2008, just when they acquired new spaces.6 Moreover, 400 of these 1,600 spaces were allocated to donors, organizers and associates of the minister who lived in Tomassi’s LaFontaine riding, and whose projects received low marks when they were evaluated by civil servants in the ministry.

The disturbing trend revealed in the last Liberal budget is not to develop new spaces for small children, leaving many parents no other choice than to enrol their children in unsubsidized commercial daycare centres, which are currently growing spectacularly. Since 2007, the number of spaces offered in these daycare centres has risen from 4,751 to 11,173. In 2009–10, more unsubsidized spaces (4,219) than subsidized ones (4,196) were created.

“This trend is undoubtedly due to the increase in the daycare tax credit,” notes Nicolas Girard. “It’s not likely to be reversed – quite the opposite since the government plans to pay out reimbursements on a monthly basis.”

This ideological shift by the Liberals in favour of commercial daycare, subsidized or not, could have very serious consequences for the quality of services offered to children, says education professor Nathalie Bigras of the Université du Québec à Montréal:

Working conditions in private daycare centres are deplorable, and that affects the quality of care for children … The battle for quality of services is central … We have a lot of solid data for the past 30 years, particularly research by the Organisation for Economic Co-operation and Development, which shows that investment in early childhood is a factor in a country’s development. All these research data argue in favour of a high-quality system.

Quebec has a lot at stake. We have a high-quality system, the parent-run Centres de la Petite Enfance, whose sole objective is to meet the needs of young children and their families, complemented by daycare in a family environment. In their IRPP study, Japel, Tremblay and Côté analyzed the quality of services provided in the various daycare environments. They found that the CPEs and services in a regulated family environment are generally of higher quality than other types of service.

The authors’ recommendation for further development of the CPE system, especially in disadvantaged neighbourhoods where CPEs have been slow to take root, makes good sense. 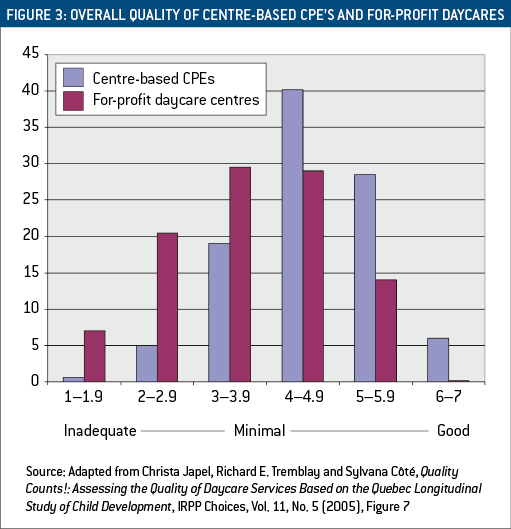 3 See P. Bernard and H. Raiq, “How Poor Are Single-Parent Families?: A Comparison of Select European Countries and Canadian Provinces” (paper prepared for the conference of the Council for European Studies, Montreal, April 2010).